The sweat, thought and stories behind naming eCommerce companies 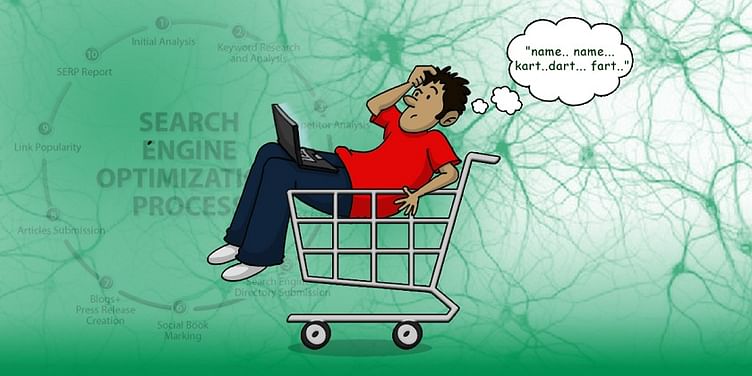 Online shopping in India is estimated to cross $30 billion by 2015 with more than 300 million online users. eCommerce is at an interesting juncture, and we’re showcasing some of the companies that are doing it right in the upcoming eSparks 2013 tomorrow. As more companies are starting businesses online, an essential part of their brand identity is the name of the company itself. While preparing for eSparks, we were curious to figure out how companies went about choosing the name of their services/products. We conducted a poll on this, and got some really interesting answers.

What’s in a name? More than you might expect.

In a space where we’re surrounded by more than 30 companies with ‘kart’ in their name (for obvious Flipkart reasons), it was refreshing to see some creativity. The naming process usually starts with an agonizing brainstorming session only to later find out that the names chosen do not have a domain available.

There are few, who get lucky with names that are also effective -- Samaan, DelightGifts, ExclusiveLane, Online Prasad, OfficeYes, VaRighty, KaiseDiya– to name a few. Those with local flavour also works well like Pune Express, Ahmedabad Gift Shop and Hyderabadi Biryanis. Then there are companies draw inspiration from being Indian -- Gallibazar, Vastradi, Vikreyeta. Movies are inspiration for the likes of Dhol Dhamaka and for companies like Red Lily, metaphors come to their aid.

Here are some interesting stories we heard:

In 2010, founder, Annkur Agarwal was brainstorming with couple of his friends thinking a name for their startup. After many discussions and rejecting options like MarwariPricing.com, he came up with PriceBaba.com. “The trigger was simple, my mom had told me to make an online payment for some XYZ baba who offered consultation over the phone. I figured, people really want a baba in their lives and therefore, I thought of making an authentic one for a change. In all fairness, availability of domain name was also a top priority,” says Annkur

OyeChotu: Taking Inspiration from Real Life (and be practical)

“While I was discussing about the concept of ordering and delivery of Indian food products to NRIs, my husband in a split second thought that if it was in India, he would call 'OyeChotu' and ask for delivery,” says co-founder Ruchita Desai about the startup’s name. Ruchita felt that the name would connect with Indians living and began testing this alongwith three other options that she had. After testing on 50 odd people of different ages and languages and for 30 days, she was convinced that OyeChotu.com is the most memorable of the lot.

When the two co-founders of GamesINC quit their corporate jobs to start a video game company, they toyed with names like GamesCorp or GamesINC. “But as we were researching the market, we found that one of the major pain points that gamers faced was the lack of professional set-ups in the gaming space in India. Gamers are a very knowledgeable, passionate, and highly networked customer segment. We therefore decided to settle on GamesINC: a brand that clearly was focused on gaming, but also brought a professional service to gamers,” says co-founder Saptarshi Nath.

nupinch: A lot can happen over coffee, well almost!

“Our business idea and the name of our venture was born while brainstorming at a cafe. After freezing on the B-Plan, the most important thing for us was to grant our idea a sensational name, common yet discrete,” says founder Ankur Sethi. And after struggling for eight hours and guzzling on dozens of extra-large cappuccino, the idea struck when Ankur’s wife called him to check on his dinner plans around mid-night. “I asked my wife, 'Pallavi, how does somebody feel, when they want to something new?' and she said ‘new pinch’” and so the name,” says Ankur. However because they could not acquire newpinch.com, nupinch.com was the next best option.

Gyeser: When you can’t think of anything!

“Naming our website was one of those initial challenges which went on forever! Being an online restaurant aggregator we were looking at names which had the regular keywords: food, dine, meal, hungry etc! So finally after days of searching available domains and hours of argumentative discussion we just decided to give up searching for a name,” says co-founder Akhilesh Kumar. They already had an existing domain www.gyeser.com and decided to go ahead and use that. “Now what does Gyeser mean? Well we have absolutely no idea, but the good thing is, even the customer does not,” says Akhilesh.

Very few would know that Tushky originated from "Push". An initial idea built around pushing relevant local content to relevant people via mobile, web apps and other channels. At the last moment, Pushky was changed to Tushky, to align with the initial of founder Talvinder Singh.

While every name has a beautiful story behind it, one name we really liked is Makhhichoose -- only a Google chrome extension, to give you the cheapest price but it has everything -- the meaning, the zing, the local touch and definitely makes one curious.

See you tomorrow at eSparks 2013 where 12 of the most promising eCommerce companies will be presenting!