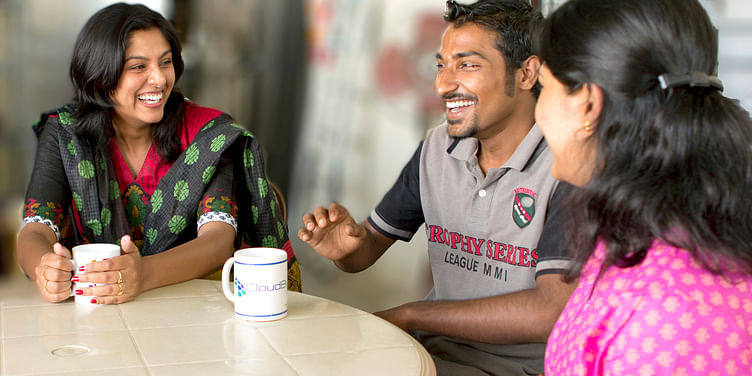 This article is a part of the Culture Series we are carrying as a run up to the Startup Jobs Fair, India’s first exclusive campaign to connect the most promising talent with the most exciting startups. This series will bring out the culture of some of the most dynamic startups that have managed to scale and make a mark. Today we are showcasing CloudByte

Speak to Umashankar Mukkara and he would come across as a regular guy. Get him talking about his company, CloudByte, and he transforms into an

inspiring leader! He speaks in a soft and understated manner that you would most associate with a technologist. He also exudes a great sense of passion towards the problem that he and his team at CloudByte are solving.After experiencing great feedback from its initial partners, Cloubyte’s technology which provides software defined intelligence in controlling and allocating storage resources, will soon come out of private beta and will open its services to the world markets. Umashankar describes this as a moment of reckoning for the 40 member team that’s worked hard to get it rolled out.

Umashankar revealed a very interesting culture that this startup possesses. I got a sound understanding of what CloudByte has to offer to the 3000+ attendees at the YourStory Startup Jobs Fair.

Umashakar prides himself in the problem that the company is solving -- “With cloud infrastructure ramping up, data virtualization is pretty much sorted out. But there is still a gap to be filled in the data storage layer, and that’s what makes our solution really useful.”

CloudByte’s team is a predominantly a technology team and Umashankar believes that such a team requires an environment that nurtures creativity. He says, “It’s a very flat organization. We don’t have any managers and in doing so, we’ve managed to build a culture where no one works for anyone; everyone is self driven. Yes, there are delivery leads and program leads, but all of them have their hands on a significant part of the work.”Umashankar wants to model his company like Google. He says, “The aim is to replicate what Google did with their organization. Even as they were rapidly scaling, they managed to retain a sense of the startup culture to the great part. Now that they’ve grown to become a corporate, they still strive to do that by having managers who also perform the main tasks of the programs that they manage. I hope we can also do that as we grow.”

CloudByte is now a 40 member team.

If you’re stressed at work, then something is wrong

A startup is often associated with working long hours and I thought this was the case with CloudByte as well. This however isn’t the case with CloudByte. Umashankar says, “The aim was to make a company that will nurture creativity. But if you are stressed out, then that is not going to happen. We strongly discourage working late and no working on weekends.”

Cloubdbyte also accommodates a lot extra curricular activities -- “We have our regular parties and team lunches, and before funding they were a little

smaller in scale. Recently we did a big blast for the new year.”Umashankar reiterates that one shouldn’t recreate because they’re stressed -- “It’s really important for us that you enjoy your work. That’s when you can be really creative.”

Don’t join if you just want a job

Umashankar minces no words when asked about the kind of people he wants to on-board at the Startup Jobs Fair. He says, “If you’re looking for a job or you want to join because you want to earn a living, then I don’t think CloudByte is a place for you. We expect people to know how they will fit into our company. They must be driven to be a part of the winning team. Of course we do our usual aptitude tests and reference checks.”