How Risky Is It To Join an IIM? 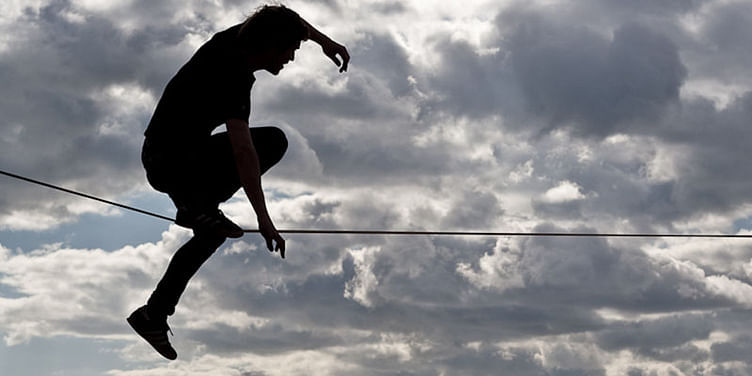 What you've to ask yourself is "What is your Risk Appetite?", rather than asking "Should I join IIM?"

MBAs are risk aversion tools, if a business graduate comes to you and says, "I just love the thrill of gambling and risks", Tell him,

Once upon a time there was a frog.

He lived in a deep well with all his well wishers around, they were all very happy. He had beautiful green girlfriend they both used to do lots of crock crock every now and then. One day while looking above, he wondered, what if I go out of this well, what is there?

(From this one all the artwork is outsourced)

His parents explained to him, how the world rotates around this well and their is no life form beyond, when his friends found out about it they laughed at him, his girlfriend also did not crock with him that night.

He then tried to climb the wall, but soon he was explained again how the gods don't want him to go out and that's why he keeps falling down. He was also labeled the crack of the pack, his friends loved drinking with him, cause it was really fun making fun of him, who doesn't want to do that over a beer or two?

Now, he was damn adamant on going beyond the walls, he hid his wishes deep inside and trained hard for upcoming high-jump in Well-olympics, high jump was their favorite game, every frog loved to participate in high jump and it was "The Ultimate dream that every tadpole aspired to be." He worked hard for it, he had the his dream in the back of the mind, "this gold medal would make sure I can jump beyond the walls."

Obviously, like all happy ending stories he won the gold medal!

Now he was a RockStar in his society.

So whatever he said was listened with respect. He got money from some rich frogs easily now for working on something secret, he used the money to plant some water-plants which would cling and grow along the wall.

After years of patience,

the plant reached close to the top of the wall, everyone looked up to him when he made the final jump!.

Soon, enough he was labelled the hero of their generation, and when history was being written, he was declared as God of the Frogs! One Frog, as they said later "One small jump for a frog, one giant leap for frog-kind"

The Frog is You

The Well-olympics is your IIM

The High Jump win is your passion into action

The Rich Frog is your Venture Capitalist

The Plant is your Start-up

The Jump is the success of your Start-up

The Follower frogs are well Followers

More importantly, in hindsight, you wonder if you could have planted the plant anyways, by asking somebody else for help, selling your idea to some more frogs, but you chose a different route, which also lead to success? But, was the Well-olympics necessary? It is for you to decide.

After many years of roaming around the river and lakes, our hero Frog found her Princess which was a real princess! they kissed, fell in love and he eventually became the king of the land.

He was still the cute frog only though, those things about princess kissing a frog and he becoming a human are all shit, this is what really happened!

I am not saying MBAs are bad, you just have to know why you're doing so? If the reason is a because you don't know what to do right now, I take it as a reason, but come with a reason, this will be the reason that you need to tell yourself when there is chaos all around! Examples of some unconventional reasoning besides fat paycheck.

Why you should not do an IIM?

Cause it takes guts to reject an IIM, and even if you loose all your fingers in an accident with just that one left, you'll still be more manly than Shahrukh Khan, not Anil Kapoor but yeah definitely more than Shahrukh Khan.