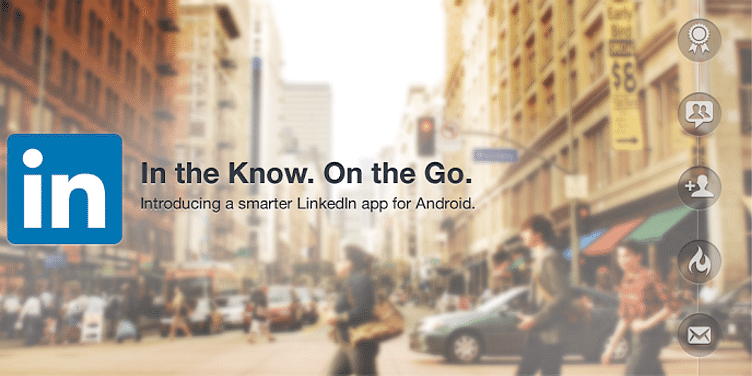 LinkedIn today announced a revamp of their mobile app for the Android and iPhone platforms. It’s a complete UI and UX overhaul in comparison to the older variant. Apart from this, the LinkedIn blog states that it has focussed on localization and personalization. (Check out this video)

We spent some time with this app, and here’s a quick review of what LinkedIn has to offer to its mobile users.

The new look and feel

The most notable change in the app is in the way the news feed looks and feels. It’s laid out like the Facebook app - rectangular cards carrying information and pictorial snippets of links posted.

Web links however, render in a webview within the app, which none of the other social networking applications do on the Android Platform. This is more common in the iOS ecosystem. However, there have been instances where the link doesn’t render in the in-app webview and the LinkedIn.com webpage shows up.

While opening the app, they’ve got rid of the outrageous animation that the older LinkedIn app had and have replaced it with a light themed splash screen, which is much more pleasing to the eye.

The sliding menu is simple and uncluttered, and at the same time, has shortcuts to all of LinkedIn’s essential functions. Messaging and notifications have been subtly placed on the top of the menu. The menu itself consists of shortcuts to the news feeds (home), your profile, people you might know and jobs.

A lot of emphasis on this revamp has been placed on personalizing the user experience. Top stories for you, your new connections and recommended jobs for you are placed first on the news feed. The shortcuts on the sliding menu can also be customized to your liking.

The app can be read in Bahasa Indonesia, Bahasa Malaysia, English, German, Spanish, French, Korean, Italian, Japanese, Portuguese, Swedish, Chinese (Traditional, Simplified), Turkish, Dutch and Norwegian. With India having its second largest user base, there was no localization with respect to India the app showed.other than the page which showed the cost of a LinkedIn subscription update in Rupees.

However, this is understandable as most professionals in India are speak English.

From the outset, the app looks a lot like Facebook. Having said that, it definitely provides a much better user experience than before. It’s faster, more responsive and overall, a lot more pleasing to use.

There are a lot of features that have been removed from the profile page. Embedded YouTube videos and SlideShare presentations cannot be viewed on the mobile app. Going forward, integrating these features in the app could be on the roadmap for this app.