TheGSX.com, a Stock Exchange To Trade in Cricketers and other Sportsmen 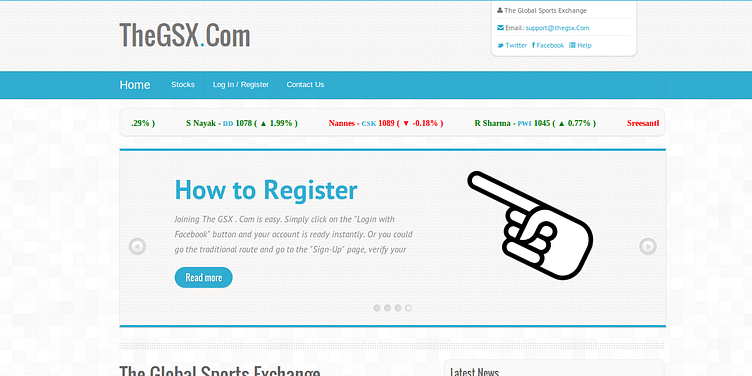 The concept of Indian Premier League(IPL) was born out of the reasoning that people from different states of our country should have their own teams they can root for. Many skeptics thought this was too far fetched, after all we all love our national cricket team and just by being part of teams from different states nothing much would change. However, after yesterday’s match between Chennai Super Kings and Delhi Daredevils, we can be pretty sure that Dhoni or his Chennai team is currently not hot favourites of people in Delhi. So if you are Delhite wanting to take things into your own hands and give a vent to some of that match-loss frustration, then check out TheGSX.com.

Started by Neel Shah, TheGSX.com is an online sports stock exchange, which allows you to buy and sell shares of a particular player, just like the real stock market. Cricketers have a certain number of shares assigned to them which can be brought or sold by the trader. However the trading does not involve any real money and all that happens on the site is pure fun and game. On registration, the trader is assigned some points, which is also the money they can use to buy stocks of players. Buy good players and sell the bad ones. Neel says that all the principles used in a real-life stock exchange is also used here. “A player is evaluated on the runs scored, wickets taken, his strike rate, past performance and so on. This is also the criteria for deciding the dividend the trader can earn on a player,” explains Neel. For a complete understanding of the nitty-gritty’s of how it works, go here.

Neel is the sole founder of this venture, which he has modeled on the lines of Fantasy Sports in the US. The site is not a betting platform as it does not involve real money. But at the end of a ‘tournament’ the winner is given real cash money as prize. A ‘tournament’ is also called a ‘trading season’ which normally coincides with real on-ground cricket matches. So for example the current trading season which started from 1 April, 2013 and will end on 26 May, 2013, is in tandem with IPL 2013. “We will have these seasons alongwith real games so that there is enough action for traders on TheGSX to base their decisions on,” explains Neel.

TheGSX.com was in beta since January this year and came out of it on 1 April, 2013. However TheGSX.com is the refurbished avatar of Spoxchange, which was basically the same idea, but ran into trouble because Neel was not keeping a tab on the backend IT infrastructure of the site. However for TheGSX, Neel is being assisted by his brother in the US for all requirements connected to IT. Neel is a management graduate from IIM Kozhikode, who decided to start TheGSX because of his passion and interest for the game of cricket. “Cricket is something I am very passionate of and making my passion my business means I will not be bored of it and I will do things to ensure its going well and make it more interesting as a user as well,” reasons Neel.

While they have started with cricket, Neel says they are working on adding other sports like tennis, F1 and football. While the scoring for tennis and F1 is relatively easy, Neel says cracking the right algorithm for football is taking time, as there are not many goals that happen and other stats are difficult to measure. They are also in talks with NFL in US to form partnership, as well as in discussions with basketball and rugby associations in the US to tie up with. “Fantasy sports is a huge market in the US and we have got very good response for our concept there,” says Neel.

Neel is currently focused on building his user base, which stands at 7,000 users, of which 2,000 users are active at any point in time. He wants to build his user base to 50,000 to a lakh so that he can goto IPL franchisees and partner with them on their websites. “Once I have a formidable base, I can approach franchisees and see if we can partner on their websites. Because then have their own fans, who can come to TheGSX and play the trading game,” explains Neel.

Currently the venture is boot-strapped and Neel says he is more interested in doing strategic partnerships to grow the venture. Advertising and marketing campaigns are also another way to spread the word and earn revenues. Back when Spoxchange was launched, Neel says the site got very good traction and received about 18 lakh hits within 45 days of launch. He had also partnered with a leading TV channel to provide data on player popularity for one of their shows on cricket as Spoxchange.

Besides trading, users can also post their blogs on the site and comment or predict on a player’s performance. “So say a user writes on his blog that Sachin is in good form and will score a century and if that actually happens, then he gets the brag value. Also he can help influence trading decisions if he manages to get his predication right time and again,” explains Neel. The site also has a live score card as well as all the latest cricket news is made available via Cricinfo, this can help traders take informed decisions says Neel.

The other thing that users can do is, to create a tournament himself and challenge his friends to participate, such independent tournaments allow more user engagement and interest. Neel is also developing a mobile app for the site, which he says will be ready in the next three months.