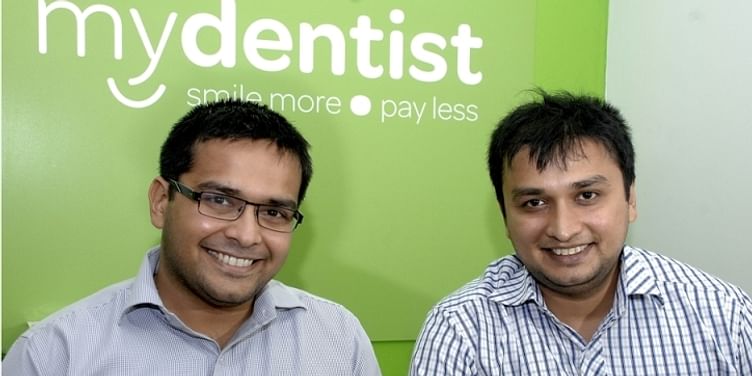 My earliest memory of a dentist is of someone who spoke very sweetly to me and then gave me such pain that it lasted for almost a week (maybe it was just a day, but seemed forever!). I should thank him though, because such was the fear of that pain, that I have made sure I do everything it needs to keep my teeth clean and never need dentists again. I may not be a good customer for MyDentist – the dental chain from Mumbai – but then I am also not too different from people who normally use a dentist in India. “So who goes to a doctor typically in India, across classes? It is either someone who hasn’t slept for two nights, popped in couple of combiflams, applied clove oil and still if the pain doesn’t subside, then he says ok I need to goto the doctor,” says Vikram Vora, co-founder and CEO, MyDentist.

From identifying a need gap, to executing the plan with clockwise precision, MyDentist is today a 50-clinics chain in Mumbai, since starting up in 2011. We met Vikram to understand how the startup was doing since starting up and how have things moved since they received funding from Seedfund & Asian Healthcare Fund earlier this year.

The growth, says Vikram has been good and from opening two clinics per month, they are now aggressively expanding by opening 5 clinics on an average per month. Vikram would sell dental equipment to doctors as a marketing representative and had also worked with LionBridge & ICICI Bank in their tech team. Later when he turned entrepreneur, he started a chain of dental clinics under the company Total Dental Care Pvt Ltd. A chance meeting with Anand Lunia of Seedfund made Vikram change tracks and look at the larger picture. Vikram had worked with Anand at Lionbridge. Anand introduced him to Pravin Gandhi at Seedfund, who told him to shut his old clinics and listen to what they had to say to grow bigger. “He told me we don’t mind incubating you, but you will have to do what we tell you to do, you will have to listen to us. So I thought for three months, spoke to my friends -- who said I should do it as it’s a good opportunity and therefore went ahead,” says Vikram about taking the plunge. The first thing that happened in the process was Vikram had to shut his four existing and profitable clinics(under the Total Dental Care name) and get on the drawing board to chalk out the MyDentist plan.

R Sriram, founder of Crossword book stores was his advisor and helped coin the MyDentist brand name. Design agency, Lemon Design helped them choose the vibrant green colour associated with the brand, and that was the beginning of the journey. Two years on, MyDentist now has 50 clinics in Mumbai and Vikram says they aim to open 7 clinics a month. Most clinics he says break even within 6 months of starting, however the increased pace of growth has brought with it a fresh set of challenges.

From two clinics per month to five clinics to now seven clinics per month, the challenges have been different. The main one though is project management, where the startup has to manage too many contractors, who are working simultaneously at too many sites. The other big challenge they face now is that of hiring. “So when we were opening 2 clinics per month, we would need 10 doctors and now I require 20-30 doctors per month,” rues Vikram. One way to tackle this problem is to hire from campus and Vikram says they have spoken to Government Dental College and Nair Hospital in Mumbai to recruit all the dental graduates that come out of these colleges. “We have made this offer to the colleges and they have accepted in principle. This is like an FMCG company going to an IIM and taking all the graduates that they have. We know we will get good quality people from there,” explains Vikram.

If they are following the FMCG industry in their hiring pattern, then MyDentist follows Café Coffee Day(CCD) on the retail strategy and Narayana Hrudayalaya on the clinical practices. Vikram says they believe in taking the best from each industry and applying it to their business. Their clinic formats is therefore 350 sq. ft. spaces, which can accommodate two dentist chairs and one small reception. “The entire idea is to make the format low on capex and thereby cater to a larger number of people. We also have information that people may not travel more than 2 kms for going to a dentist. That means I need to be in many locations in an, which is closer to the formula of a coffee shop. At a café you have three teams – one that makes coffee, serves you and a store manager. Similarly we have a head dentist, some dentists who report to the head dentist, and then we have a receptionist and support staff,” says Vikram explaining his CCD analogy.

Another innovation done by MyDentist is to give doctors a career growth path. The 750-strong staff at MyDentist is divided into clinical and management operations team. So the clinical management team will not have any non-clinical members on it. Even the top most post in clinical operations -- which typically is a management role will be given to a dentist. “So everyone in the organization has grown from dentist to a cluster head to a clinical operations manager and then to a dental director. It now gives dentist a growth path, which was so far not available to them,” says Vikram.

The clientele that MyDentist serves is not necessarily the affluent or uber rich, but according to results of a survey done by the startup last year -- more than affordability, customers came to MyDentist due to the referrals made by friends and family. “Most people were associated with MyDentist as a brand, rather than a doctor. So when a person comes for the second time, he doesn’t even remember who the doctor was,” shares Vikram.

While affordability may not have been the biggest pull, it has certainly been a differentiator and helped more people adopt a dentist’s service. Therefore customers having a monthly salary of Rs 25,000 – 30,000 and those at the middle of the pyramid, are the customers. To make things affordable for this segment, MyDentist gives flexi payment options to customers. Similarly treatments such as orthodontist and dental implants which are high value treatments are dynamically priced in a way that can suit the pocket of every section of the society. “We classify our billings into A, B & C category. A is billings above Rs 10,000, B is till Rs 5,000 and C is anything between 0 – 5000. So we had an assumption that all the A billings that happened, would be of customers from SEC A and above, nobody would get an implant done in SEC B or C space. But that was not the case, the rich would mostly come into do cleaning and polishing, while the actual curative treatments was being done by the middle class,” reveals Vikram.

With 50 clinics so far, MyDentist is the largest dental chain in India and the third largest in Asia. At the rate which they are growing, Vikram says they will reach 110 clinics by end of this year and 250 clinics by end of next financial year. The brand is now entering Pune and has plans to enter more Tier 1 cities as they move along. Vikram says the need to ensure operational efficiencies and justify investments in creating an efficient supply chain makes them look more toward Tier 1 cities than Tier 2-3 cities. “If I open less than 10 clinics in a city, it will become very difficult for me to work with efficient operations. Because I have 1800 stock keeping units that has to reach on time, within proper expiry date, so there is a very strong supply chain team working on it,” says Vikram about his reason to stay away from Tier 2 – 3 cities.