Thanks to CII’s invitation to attend an interactive session with Subroto Bagchi, the morning of 13th September 2013 came with an excitement.

The reason of excitement was the in-person meeting with Subroto Bagchi.

We know Subroto Bagchi through his books such as High Performance Entrepreneur, The Professional, Go Kiss The World and his popular column in Forbes India, The Zen Garden, where he meets unusual entrepreneurs who share their unique journeys.

This non-engineer-non-MBA entrepreneur co-created a huge enterprise called MindTree with integrity, commitment and fire in his belly to create larger than life something. Sure, MindTree has had 9 more cofounders, but like attracts like and my experience of meeting with Ashok Soota confirms that.

When I met Ashok Soota, industry veteran and one of the cofounders of MindTree a month back over an event, I experienced the same energy and point of view about foundational traits of startup leaders - integrity, transparency and shared vision. Although Soota moved on later to create Happiest Minds, I could sense a lot of similarity of personal attributes between him and Subroto Bagchi.

The interactive session was organized at the beautiful campus of Entrepreneurship Development Institute of India, Ahmedabad, popularly known as EDI campus.

I reached the venue before-time, waiting to hear the idea of scale from Subroto Bagchi, the Gardener who has nurtured top 100 MindTree minds who, in turn, would have nurtured over 12,000 minds that develop world-class software at MindTree.

I was not unprepared to learn. I had read his latest book, The Elephant Catcher beforehand, and I was ready to better understand the subject of scale from him.

Subroto spoke about why and what it takes to scale and answered different questions of many enthusiasts.

Subroto shared many stories to explain his points; amongst them one story touched me deeply. It was the story about Arvind Eye Hospital. Here is the brief:

Arvind Eye Hospital is an ophthalmological hospital with several locations in India. Dr. Govindappa Venkataswamy, referred as Dr. V founded it in 1976. The model of Aravind Eye Care hospitals has been applauded all over the world and has become a subject for numerous case studies.

Dr. V's story is one of the most inspiring stories I have ever heard. Dr. V wanted to be a gynecologist after three of his cousins died at childbirth. But just as he was starting off his career, he fell ill and was bedridden for two years with crippling rheumatoid arthritis. Many thought he would never walk again, much less be a surgeon. But this remarkable man not only left his bed, he also slowly, inch by painful inch, taught himself surgery all over again.

At 58, the age of retiring, Dr. V established GOVEL Trust in Madurai, under which a 11-bed Arvind Eye Hospital was founded, and the rest, as we all know, is history.

A remarkable example of willpower and zest to create something much larger than life!

Thanks Subroto for directing my energy to follow this thought and get inspired from.

Then came lunch-break followed by a round-table session with Subroto Bagchi and founders/ directors/ heads of Ahmedabad-based invited software companies such as InfoStretch, Hidden Brains, Space-O Group and more.

"I apologize for keeping you waiting," Subroto Bagchi started with utmost humbleness as one news media has taken more of his minutes than he had expected.

Neither my fellows nor I had experienced such a humble opening line so we were wondering what to say.

"Now I'm all yours. Ask me anything. Let us begin!" Subroto said while sitting very next to me. "She is Paulomi Chatterji, editor of my book, The Elephant Catchers!" He introduced a young lady who accompanied him.

"So, she's the one who is responsible for making all the "she’s" to "he’s" in The Elephant Catcher book?" I asked.

"Do we want to have an introduction session?" Asked one fellow.

Subroto Bagchi said, "Let us begin the Q&A session and the one who asks questions will introduce him. This way we will save time and converse more."

I was amazed to recognize how on-target Subroto Bagchi is. It was a nice example of how to conduct on-target meetings so that energy is diverted onto the most important thing, the discussion, not the introduction!

I did not need an invitation to take lead and ask the first question.

"I'm Utpal Vaishnav from Space-O, a 100 people Mobile Apps Development Company based in Ahmedabad with offices in Russia and Australia. In your book, The Elephant Catchers, you have written about Scaling Your People. In a chapter called Square Pegs and Round Holes, you have mentioned about four types of leadership attributes. Ninja, Coach, Thought Leader, and Rainmaker. I would like to understand how these traits relate when it comes to scaling up the organization's leadership?"

"So, you have read the complete book. Even I do not remember all these." Subroto knows how to win people's hearts by choosing the most humble words.

And he started explaining. For rest of the people who had not read the book, he began with explaining the context.

Master storyteller, Subroto Bagchi, then grabbed the pen and started playing with whiteboard and blue ink, which generated meaningful drawings and experiences for everyone in the room.

Every organization that intends to scale needs a balanced mix of these roles. Right people at the right place is a very simple concept but extremely difficult to practice. The reason is simple – you might not know who you are!

"How did you transform and grow yourself from Idea to IPO at MindTree?" Ashok Karania of InfoStretch asked the next question.

"There are four key pillars," Subroto started an insightful answer.

Then followed different stories about how these four pillars can help one scale in his business and life at large. Not only that, Subroto mentioned about several useful resources such as the must-read book from Daniel Pink, The Whole New Mind, a movie documentary, Infinite Vision and one more good-to-read book, Leading With Questions from Michael J. Marquardt.

My experience of spending time and learning from Subroto Bagchi was much more than grabbing his book that he generously autographed for almost everyone in the room.

After listening to Subroto Bagchi attentively, I felt like I've just entered the school of business (and life at large) as a student and there's a lot to learn and scale up! 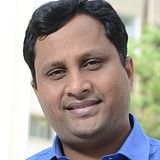