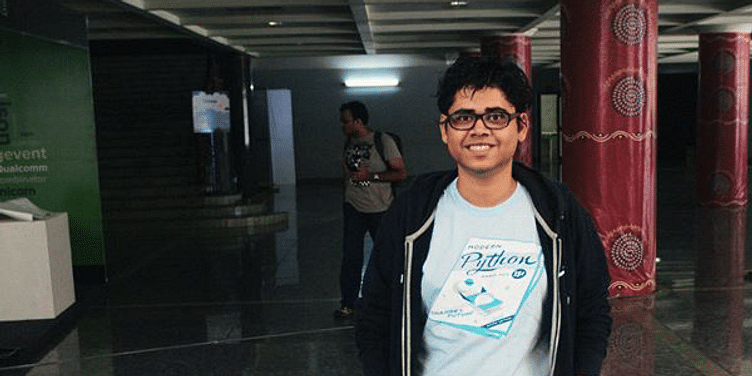 Techies are a different breed altogether. They first see the magic, then learn the tricks and finally create their own spin to it. Unlike most techies, Ratnadeep Debnath was not interested in computers in his childhood, primarily because his school did not offer computer learning in the junior classes.

Ratnadeep grew up in a small town called Bongaigaon in Assam. He was always interested in fine arts and astronomy. Wanting to be an astronaut, he got introduced to computers only in class seven. However, learning things like DOS, LOGO BASIC and MS Word didn't entice him towards computer science.

Few years later, when he got a computer at home, he instantly took to it, spending hours on the machine with the result that he ruined his entrance preparations for IIT. Though he always wanted to contribute to the open source community, he was initially confused where to start.

His life changed when he was introduced to #DGPLUG - Linux Users Group of Durgapur. He then attended a summer training camp for FOSS organized by #DGPLUG.

Slowly he started taking interest in Kernels and Device driver programming, but did not understand much. As a result he became frustrated. “I did no projects, did not write much code. Linux kernel is a beast and that time I did not have the technical skills to understand upstream code of the kernel, and no one to guide me. I basically landed on my face. My fellow #DGPLUG friends were doing at least some stuff that time. I turned out to be a big looser. I was frustrated, very frustrated, and then I decided, let's start afresh."

Ratnadeep decided that he will start coding again and contribute no matter which programming language he was given. He got in touch with folks at fedora community who gave him tasks for newbies and he picked the easiest of them and learnt javascript and built a filter for torrents - "Filter by activity".

Soon it was noticed by Fedora and they invited him to Fedora Activity Day (FAD) in Red Hat's Pune office in 2010. At the same time he was preparing for GRE and initiated a project to list words for GRE Named wordgroupz, which was approved by FAD.

There he also worked on Transifex, which was another open source project from fedora which later became a full-fledged startup. While working at Transifex, Ratnadeep once again came across Mozilla and worked on building an API needed by Pontoon (a Mozilla project) for localization and then ended up becoming a contributor to Pontoon, finally becoming a Mozilla contributor.

At present, Ratnadeep is employed at Goibibo where he was awarded the Superstar Award for the Year 2013. He is also building Waarta - an IRC Client over web as a service, apart from contributing to Firefox devtools.

Talking about the future, Ratnadeep says he wants to create a startup around FOSS ecosystem. We wish him all the best.