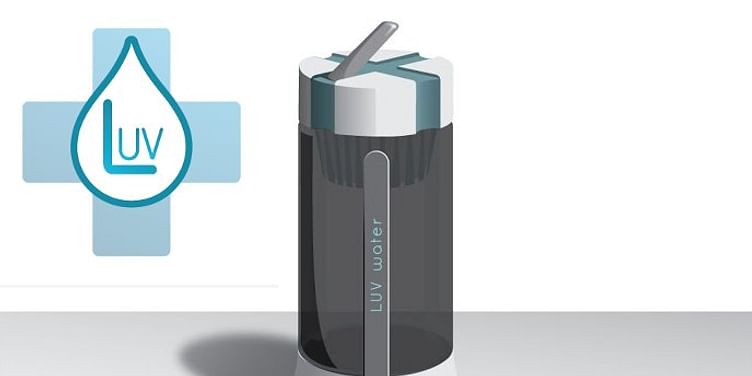 Availability of clean drinking water is a big problem in many areas throughout the world. Around 3.5 million people in the world die each year from water related diseases and 780 million people lack access to clean water (source). There are many ongoing projects to tackle this problem and a promising one comes from youngsters at the Carnegie Mellon University. Four students, including two Indians-- Chintan Sharma and Radhika Sawhney-- are working towards building LUVWater, a self-sustainable product, which provides clean drinking water using UV light.

The LUVWater product is basically a water bottle with built-in ultraviolet LEDs to purify the water in the bottle. The bottle is composed of two sections, a water container and an external chamber. Once water is filled in the water container, it gets converted into electrical energy through a small generator in the external chamber. The electrical energy is stored and is used to power the UV LEDs which purify the water in the bottle.

Pricing and the project status

LUVWater won a cash award which is being utilized to fund provisional patents and initial prototyping which will be ready by May 2014. The team intends to raise some capital via traditional methods or crowdfunding. The estimate cost for production of a bottle is around $25 at this stage.

Apart from some technical fine tuning, one of the biggest challenge facing the team is that the product may not be robust enough for utilizing in third world countries. The project is still in an initial phase but with the kind of support it has behind it, LUVWater has the potential to make a mark in the rather difficult hardware terrain.

There was a wave in 2012 when a number of companies took up the challenge to provide solutions for water purification. NanoH2O, a company that develops membranes for filtering out salt and other materials in water, raised $60.5 million to expand its sales. Other companies like Puralytics, Influent and Imagine H2O have also been doing good work in this area to create an impact.

Know more about the product on their website: LUVWater