From a laid-back Nawabi culture to Hi-Tech hub: Why Lucknow is the new startup destination of India? 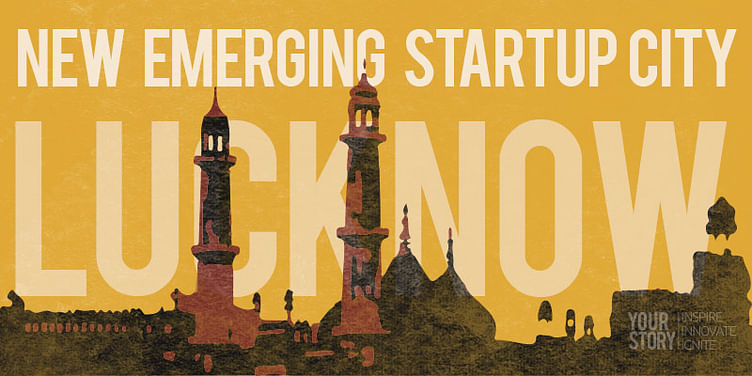 Lucknow is known for many things besides its ‘tehzeeb’ (etiquette). Its history, politics, food, clothes, music, culture and language are traits of a city steeped in rich traditions. Today, I am going to share with you how this historic Indian city is fast embracing the hi-tech startup culture.

“I used to speak in many conferences regarding the lack of startup eco-system in Lucknow, the legendary capital of Uttar Pradesh, even after having an IIM in town and couple of IITs nearby. After mulling over it for some time, I took upon this responsibility to build an eco-system here. ‘Bootstrap Weekend’ is a weekend meetup event which I have just kickstarted. In our first meetup in January, 12 people turned up from eight startups, including one woman entrepreneur and an enabler - Michelle Abraham from Villgro. We have decided to meet every month on Saturdays or Sundays,” said Durgesh Nandann, Founder, InMotion Media. Durgesh has been relentlessly working to make Lucknow a startup-friendly city.

“The meeting gave us a glimpse of the endless possibilities in this space; we were inspired and humbled by the experiences shared,” said Akansha Singh, Founder – Café 3105, the only woman entrepreneur who attended this meetup.

Challenging the common perception that cities like Bangalore and Pune are the only places for tech startups, young entrepreneurs here are convinced about their reasons to choose Lucknow and how this city presents a unique opportunity.

Anurag Rastogi, co-founder of NewGenApps, says, “We shifted base to Lucknow in 2009 and have grown from a three-member team to over 50 people today. We had strong reasons to be in Lucknow, and let me outline some of it here for you:

-       Having worked in geographies across the world, I thought why do we need to go outside India to flourish? I had Netherlands and Australian work permits, and a US H1B. I let all those expire and decided to build a company in Lucknow, it’s my town and I wanted to contribute my bit in making it a tech hub.

- We knew there is great talent in Lucknow and Uttar Pradesh at large. Many people cannot leave their hometown to work in Bangalore or NCR. We started creating opportunities for the talented folks here to stay closer to their homes.

Lucknow-Kanpur corridor (90 KM) has some of the greatest talent available. As the ecosystem influencers come together to channelise this potential, with right vision and good governance, we can build one of the best tech hubs here. Let’s not ignore that Kanpur has an IIT, and Lucknow has an IIM among many other notable institutions.

Anurag had noted: “Victor Hugo once said ‘all the forces in the world are not as powerful as an idea whose time has come.’ Lucknow's time has come. India cannot grow without UP growing. We have almost one-fifth of India's population and would be the fifth largest nation in terms of population if it were an independent country. We need more of our countrymen to come back from abroad and build Lucknow and UP into a great developed state.”

Praveen Kumar Singh, co-founder of Lucknow headquartered Healthtokri.com, says, “After deciding to start an online healthstore, the next thought was, where to start it from. So first it was Gurgaon but after 10-15 days of brainstorming and surveying, we found out that we will not be able to afford the operating costs and manage operations there. Lucknow was the best available choice for a bootstrapped venture like ours.” Praveen and his business partner were encouraged when their decision to startup in Lucknow was validated with the fundamental requirements for their business already in place in the city -- availability of all products across most of the brands, good connectivity with the rest of the country, presence of all major e-commerce shipping carriers and mentorship support.

“The reason for starting out of Lucknow in 2010, came from the observation that most IT companies here were operating in outsourcing model. My drive was to bring technology and its impact to people of Lucknow or to put it broadly - to Uttar Pradesh. Soon after we started, Microsoft identified our potential and partnered with us for the

Nikhil mentioned, “Microsoft provided us with two rounds of funding for developing products which will help them pitch Office 2013 as a line of business application. We are still working in alliance for the improvisation in the features of the product. It will soon serve the business purposes of various public departments.” For this young entrepreneur, the biggest sense of happiness and pride comes from his 25 member local team. And, a well furnished 2200 sq.ft office space adds on to the journey.

Pramesh Agarwal runs an online library, 300stories.com, out of Lucknow. He surveyed the market in the city and found a big need for the service he was offering. He said, “It’s easier to make mistakes in a smaller city with minimal capital and expand to mature markets after fine-tuning the model.”

Durgesh said, “The idea of working with rickshaw drivers was born in Lucknow after meeting a number of drivers and finding a pattern in their problems. InMotion Media took birth in this city to address these problems which were particular to this part of the country. The problem is solvable and I needed to work here before expanding to other markets. I know Lucknow inside-out, if you are brought up in any city, you develop a comfort level with the city; for me it’s the same with Lucknow. This understanding with the city was enough to convince me to work here ignoring all the odds and lack of an entrepreneurial culture.”

InMotion expanded outside Lucknow in UP and in other states as well. “It was much easier to expand than to start in Lucknow, may be because we have seen the hardships here. This city embraces you and at the same time toughens you as a businessperson,” he adds.

On a lighter note, Durgesh adds, “My friends or people in my network who visit Lucknow are always mesmerized by the beauty of the city, and I often hear remarks like ‘we would love to settle here’, in fact, I took Rashmi Bansal for a city tour and she loved it, saying – ‘it was a Sunday perfectly spent.’ ”

Madhukar Pandey, national head, MeraDoctor firmly believes in the human capital which the city has to offer. “We have talented human resource in the city, and the city is far more economical than others. If you show the young people in the city that they can grow here, then there will be no reason for them to move to other cities. We have seen it happening at MeraDoctor and it’s very motivating.” Madhukar also believes that people in Lucknow are warm and their sense of ownership towards work is very high. Startups run on adrenalin and one cannot ignore the emotional intelligence which people from small towns naturally have.

Only time will tell how fast Lucknow will embrace the startup culture, but one thing is for sure, these entrepreneurs are passionately bringing about winds of change. One cannot but remember Mahatma Gandhi’s famous line, ‘Be the change that you wish to see in the world.’

I believe numerous factors are working together to shape this growth. Some of the key developments favouring Lucknow are:

“In my entrepreneurial journey I had to face a lot of obstacles. I wish Bootstrap Weekend in Lucknow existed 25 years back when I had started, I am sure then my journey would have been different. It was exhilarating talking to such bright minds that my only wish was to turn the clock back and start all over again,” Alok Misra, MD, Benchmark Enterprises and a serial entrepreneur, said after attending Lucknow’s Bootstrap Weekend event -- a clear indication of changing times.

As Machiavelli puts it, ‘One change leaves the way open for the introduction of others,’ let’s watch out and participate as this Nawabi city embraces a change which, I believe, is here to stay.