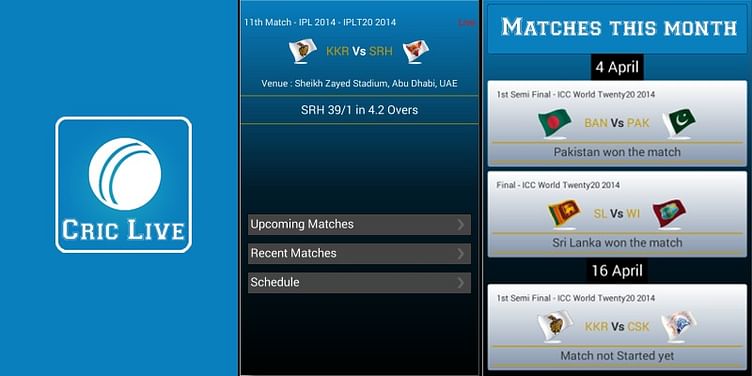 For cricket lovers, Indian Premier League (IPL) is nothing less than what English Premier League means to soccer fanatics. We see people browsing their smartphones in local train, metro buses, work-places etc. to get live updates of the IPL matches. While there are various utility apps to track share market fluctuations, existing apps for IPL matches display updates late by at least 10-15 minutes.

To get rid of stale updates offered by various apps, AKI Technologies has developed CricLive, an Android app, which gives you ball to ball cricket scores with a delay of mere three seconds. Importantly, its update is faster by a ball from Star Sports & ESPN owned platform, Cricinfo.

“Everybody in the team at AKI Technologies is a cricket fanatic, and hence came up with a plan to create an app to provide timely deliverance of the score,” says Ashutosh Valani, founder AKI Technologies. Besides live updates, it also gives you a shortcut score right on the homepage.

The app (link) uses Bangalore-based Litzscore’s API, which enables it to offer live feeds for any cricket match across the world.

AKI Technologies was founded by Ashutosh Valani in the year 2010-11 before the e-commerce bubble. It was started with the goal of getting entrepreneurs together and creating ideas to make lives better, easier and taking a step closer towards the future. He dived into entrepreneurial pool with a daily deal website and later went to create a few more successful products along with a call scheduling Android app, Call Looper.

Within four days of its debut on the play store, CricLive app amassed close to 500 downloads. CricLive app will also allow users to make a short cut homepage widget so that they don’t have to enter the app every time in order to check the scores; instead the scores get updated on their screen in real time.

At present, the startup isn’t looking to get revenues out of this app at least for the first six months. “This app has not been developed to generate profits, but to give cricket fans live updates of the score – something that was missing,” adds Ashutosh.

This app is developed for Android users and the iOS app will be launched soon after they receive feedback from Android users. It is a lightweight app for the Android devices, where the total app size is below 2mb making it easy for all the devices to access and download it.

Moving forward, the startup will be looking to cater to fans of different sporting genres. “We aspire to be an app offering live scores and updates of sporting genres around the world, including soccer and tennis among several others,” reveals Ashutosh.