Divya Narendra, the Harvard grad who took on Zuckerberg, on his new venture, SumZero 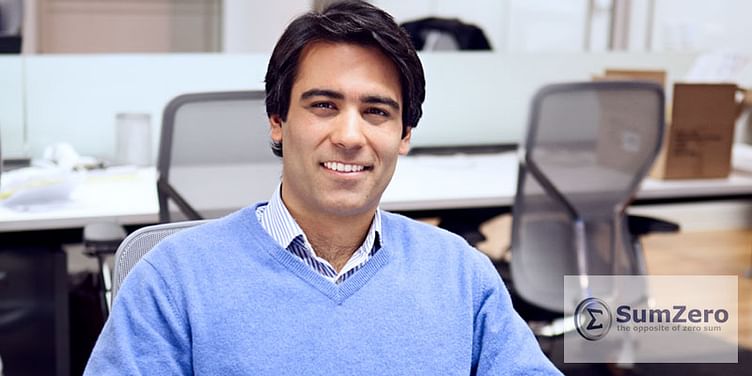 It has been 10 years since Divya Narendra and the Winklevoss twins took Mark Zuckerberg to court for alleged intellectual property infringement. They eventually walked away with a cash/stock settlement now estimated to be worth well over $100 million following Facebook’s IPO.

YourStory spoke to Divya about his journey from Harvard, where he co-founded ConnectU, to his current role as CEO and Co-founder of SumZero.

YS: Tell us about SumZero. What is the addressable market and underlying opportunity you are going after?

SumZero’s membership base is represented by analysts and PMs at nearly all of the world’s largest and most prominent investment funds. We also have a free newsletter for non-professional investors called ‘SumZero Basic’ which will give them a glimpse of what the pros are talking about. Check us out at sumzero.com.

YS: What differentiates SumZero in the market? What is your competitive advantage?

DN: SumZero's main point of differentiation is the source of its content, namely, professional investors working at funds. I recognized from the beginning that traditional Wall Street research (aka ‘sell-side’ research) was flawed for two reasons:

In my opinion, the best alternative to Wall Street research was to create a tailored, online community that encouraged professional investors to share their own proprietary research for the first time.

YS: What got you to startup? Tell us the story before starting up.

DN: I was working at a large hedge fund in Boston that shut down at the outset of the credit crisis in 2007. Instead of transitioning to another fund, I decided that this period of turbulence in my life was actually an ideal time to pursue something entrepreneurial. I was 26 at the time and had built enough savings to bootstrap the business for the first year before raising outside capital.

YS: Tell us about your team at SumZero.

DN: Everyone on our team is entrepreneurial, even our engineers. We are based in NYC though one of employees runs SumZero's recruiting services platform from the west coast. Overall, they are the best team I've ever worked with. Everyone is professional but also fun to work with, and we've had virtually zero employee churn since launching the business.

YS: Tell us more about the startup culture in NYC, your competition and access to resources.

DN: NYC has truly become a world-class hub for tech startups. Though there are a number of well known VCs in NYC, there is also a very deep pool of angel investors in NYC who support startups from the earliest, most fragile stages.

YS: What has been your progress till date? What can we expect from you in the coming months?

DN: At SumZero, we are working on a series of major feature releases which will deploy over the next several weeks and months. Hopefully, we can continue to improve our product and build SumZero into a sustainable business built for the long run. I would encourage your readers to check out our SumZero Basic service which is free and highlights our unique research on a weekly basis.

YS: What keeps you going? Do you have any memories from childhood which influenced you to become an entrepreneur?

DN: Like most entrepreneurs, I've always been aspirational, optimistic in nature, and had a desire to make an impact in the world. I remember having this drive from my early childhood. My parents, both doctors, also encouraged me to try new things and explore potential talents, which I think is a great foundation.

YS: What inspires you?

DN: I'm inspired all the time, often times by events and people entirely outside of the business realm. I'm a pretty active guy; I love running, skiing, tennis, and try to be health conscious overall. As such, I find great athletes inspiring, whether it's watching Roger Federer trying to recover from a tough season or Messi on the soccer field or Bodie Miller on the slopes. The world is full of talented people doing amazing things. In the business world, I love what Elon Musk has done to bring the future to the masses.

YS: Any challenging moment? How did you overcome it?

DN: Professionally speaking, I think my most challenging moment was starting SumZero three years after graduating college. When my previous employer shut its operations down in the summer of 2007, I knew I wanted to launch my own business but didn't have much in terms of savings to get SumZero going. My friends and family were certainly skeptical as to whether I could make it happen. Ultimately, I decided to forgo other job opportunities in order to give entrepreneurship a second go. As with ConnectU, I struggled to find developers, and in fact, the first three developers I hired cost me a lot of time and money to no avail. Fortunately, persistence paid off and by 2009, SumZero started to show signs of progress, which ultimately enabled us to raise outside capital and de-risk the business.YS: The riskiest thing you have done so far.

DN: Skiing for the first time without any lessons. That was simultaneously terrifying and thrilling. Now that freestyle skiing is an Olympic sport, I recently decided to try skiing backwards on my last trip to the mountains in Colorado. Of course, the pros can do this in their sleep, but for me it was nerve-wracking to say the least. Glad I made it back home injury free!

YS: What opportunities do you see in India? How can an online community like SumZero benefit startups in India where the culture of VCs, PE, and angel investing has grown exponentially over the years?

DN: I'm by no means an expert on India, but there is no question that there are huge opportunities in India given its enormous population and emerging middle class. The VC dollars that have flowed into the country certainly help validate that potential. As long as the government continues to encourage foreign investment, I suspect you will be seeing more and more innovation coming out of India.

YS: What are some of the interesting things you have done so far -- what was the drive, intent behind it?

DN: Recently, I ran the half marathon in Flushing, Queens, not far from my home where I grew up. To be totally honest, I'm not a huge fan of long-distance running, but I certainly love the sense of accomplishment at the finish line.