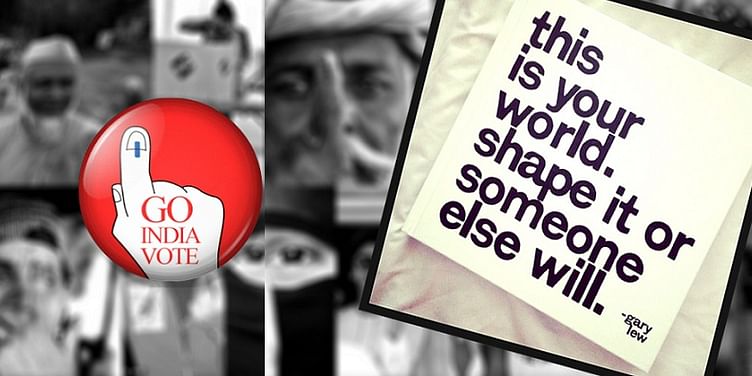 Loyalty to country ALWAYS. Loyalty to government, when it deserves it.

World’s largest democracy, India is witnessing the nationwide (Lok Sabha) elections, and true to the above words, time has come when we, the citizens (and netizens) of India act responsibly and step out to cast our precious votes.

Thousands of candidates have filed their nominations across 543 constituencies and the fate of 232(voting has taken place in 232 constituencies so far) have already been sealed in the five phases of voting which were completed recently. 2014 polls saw more than ever social media buzz and discussions on facebook and twitter. With 814 million electoral population, there’s a huge potential for startups operating in politics to engage with this massive number, get their product validated and create an impact. While some of them are helping voters choose the right candidate for their constituencies by providing data and comparison, others are busy creating awareness among the electoral which is active on social media. The opportunity is certainly being tapped in one or the other way though there is much more to be done.Here are some of the Indian startups who’re pushing the boundaries and getting netizens to the polling booth to make the right choice this elections:

Elections 2014 gamified with the ‘2048 game’Started on 15th March 2014 with the intent to make voters aware and encourage discussions, KYC (Know Your Candidate) is a platform where one can discover candidates contesting in the elections. Ankur Bansal, one of the two co-founders said, “We have over 1800 candidates data on our site covering almost all the constituencies. This data has been sourced from ADR (Association of people with Democratic Reforms), MyNeta, political parties, and other public forum and updated on a daily basis.”

The website is accompanied by a blog and a very interesting ‘politically’ customized 2048 game.

Post 2014 Lok Sabha elections, KYC platform can be used for Assembly elections, events like IPL and even college elections.

Starting up after retirement. Now compare your constituency’s candidates

SVS Ramna retired as a manager at SBI, Bhopal, and shifted to his home town Chhindwara last year. He was always inclined towards politics and wanted to enable people to make right decisions while voting. He started DailyScoop in 2013 with the same intentions and introduced the comparisons of Lok Sabha elections 2014 candidates on the blog as well.

DailyScoop offers data and comparison of the candidates from 50+ constituencies (with at least three candidates in each). Mr. Ramna said,

We compiled all the data available in public domain about the candidates from all major parties for constituencies with maximum internet penetration. We critically analyzed and triangulated the data from multiple sources and compared candidates on parameters such as educational qualification, cases where accused, percentage increase in assets, prominent political roles, most prominent work, etc and came up with quickly comprehensible fact-sheets.

Eventually DailyScoop aims to be a source for all social news.

Did you check the report card of your MP (Member of Parliament) before voting?

iForIndia is a citizen engagement initiative to actively involve people in the democratic process by rating the quality of services provided to us by the government. It has shared the report cards of the incumbent MPs and the central government.

You can go and rate your MP now.

Who are you supporting, RaGa, NaMo or Kejriwal ? GoIndiaVote now!

GoIndiaVote is trying to collect the political opinion and the reason for the same of a netizen by the means of online voting. The platform is collecting responses from people in terms of who they want to be the next leader of the country (among Arvind Kejriwal, Narendra Modi or Rahul Gandhi). They also ask the user to choose the reason for their choice of candidate.

Ashish Garg, Co-founder of GoIndiaVote, said, “We have managed good response give the fact that we have launched just a week back and are marketing through social media and word of mouth only. Some of the key highlights of the survey are:

The platform is good enough to host polls for social issues like health and education. In fact, that’s what the founders have in mind post the election.

Sumit Ghosh, Founder of Election Tracker said, “Social Media has turned up as a game changer in Indian politics and tracking it gives accurate picture of current happenings in the political scenario. Election Tracker makes the most of this power and empowers public to see the happenings live.”

Election Tracker will keep a watchful eye on the following for the Union elections 2014:

Bangalore saw a dismal 53% participation from voters, which was way less than that of Jharkhand or even Udhampur (Jammu & Kashmir). As I write this, I’m not very sure if it’s going to help increase the participation. But it is a humble attempt to provide people with necessary information and make the work of these startups heard.