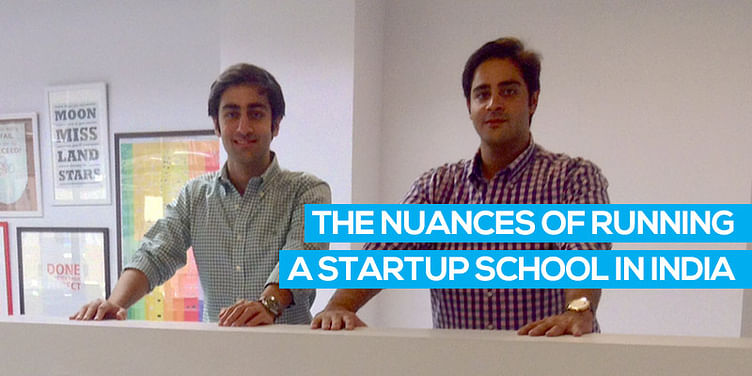 The startup ecosystem is young in India. In such a milieu, entrepreneurs often find themselves navigating uncharted territory. For example, the delivery frameworks and technology infrastructure in India may pose operational challenges which are very different in this part of the world. This is where Rohan and Arjun Malhotra come in. They are the founders of the youngest startup school in India, Investopad, championing technology entrepreneurship in the National Capital Region (NCR). They use a robust mentor network to resolve many of the starting troubles faced by entrepreneurs in India.

YourStory quizzed them in detail about their startup -- an ambitious startup school -- in the first part of the interview. Here, in this second part, the brothers speak about the nuances of running a startup school in India.

f6s.com lists more than 2,000 accelerators/startup schools worldwide. How is Investopad differentiated from others in this space?

The biggest differentiator for us is that we are not competing with other accelerators or incubators. As we are an open platform, there is enough room for us to work alongside other accelerators. Together, we can move forward faster. For example, we have already integrated with GSF and will be hosting them through their upcoming batch in Delhi. We’re also working alongside other funds and initiatives, like SW NEXT Pre-Accelerator, Nasscom 10K and IBM Global Entrepreneur Programme.

As an insider in this domain, what insights can you share about accelerators/incubators in India?

There have been some really great initiatives. The biggest stumbling block is that we haven’t yet seen that first cohort of extremely successful startups. In more evolved ecosystems, these pioneers play a crucial role in helping first-time founders and in contributing their knowledge to public forums. Their knowledge is what eventually forms best practices and guidelines for first-time founders. The work and direct ecosystem engagement of people like Steve Blank, Andrew Chen, Paul Graham, Sean Ellis, Eric Ries, Ash Maurya, Chris Dixon have been the guiding force for some of the top startups in the last 5 years. The knowledge they have made public is useful to even Indian startups but a lot of the operational subtleties are vastly different in India.

Accelerators here tend to be mentor-driven but the challenge is that most mentors either come from corporate roles or have been entrepreneurs in the distant past and are not able to guide founders through the challenges of navigating through the delivery frameworks and technology infrastructures of today. Their mentoring in areas of general strategy may be strong, but founders have a huge challenge in figuring out the immediate goals, action points and the route forward.

We hope to navigate this by focusing on an international mentor network that gives us the advantage of accessing mentors who have seen recent success and have experience in dealing with the topical challenges. Where there is a lack of guidance from mentors, we have our marketing and design experts manage those responsibilities.

How do you respond to critics who say that a lot of people are coming up with half-baked ideas and creating a false buzz in the market which will eventually lead to a bubble and a collapse?

We think parts of the argument have merit but a lot of the eventual conclusions are false. There’s absolutely no doubt that there are far too many “me-too” companies imitating existing models from different markets or building product based on what they perceive to be the need. We have made this mistake earlier and realized the need for concrete quantitative validation of the complete business model before dedicating any resources to it.

The flipside of this argument is that these startups are generating a false buzz in the market. We see a lot of ‘half-baked startups’ that are weeded out and most of them never have the chance to reach out to market or contribute to a bubble on the macro level. But at the late stages, the excitement about tech companies is justified.

Currently, software really is eating the world. We have seen industries (more in the West) being completely overturned by technologically-driven upstarts. These are real businesses that are fundamentally changing consumer interaction while making serious revenues and profits. Companies like Linkedin and Facebook are seeing sustainable profits driving their businesses. In the e-commerce space, the deep impact of the Amazon’s of the world have fundamentally affected consumer behavior, all the while cruising on profit margins that are healthy in any industry.

The challenge in technology businesses isn’t the technology or the product that is built, rather it is mainstream consumer adoption of that technology – the last couple of years in particular have been a very healthy indicator for India in this aspect. While we have now proven consumer adoption as well as monetization, delivery mechanisms for technology products are still pretty weak; i.e. iOS is too high-end for the mainstream market while the ubiquitous Android is far too fragmented to make adoption at scale viable for startups with limited development resources.

There are also other enabling issues like transactions being sub-optimal given the mobile/banking payments infrastructure and consumer propensity for cash-on-delivery. But largely we have seen examples of technology companies successfully functioning at scale in India (e.g. Naukri, Zomato, Makemytrip, JustDial, Ola, etc.) proving there is huge potential in delivering technology products along other verticals. Because we skipped the PC revolution, we will soon be very deeply entrenched in direct mobile adoption and as this increases, we finally have hardware technology distributed widely and powerful enough to solve really big problems through software solutions.

Starting up in India is no mean deal. And therefore, Investopad is offering 15 entrepreneurs free access to its facilities for 3 months and chance to work alongside the latest GSF batch. They are taking applications from entrepreneurs who have an idea, all the way through to teams of up to 6 people.

Entrepreneurs, if you are interested in applying, complete this form.

What do you think are the nuances of running a startup school in India? Tell us in the comments below.