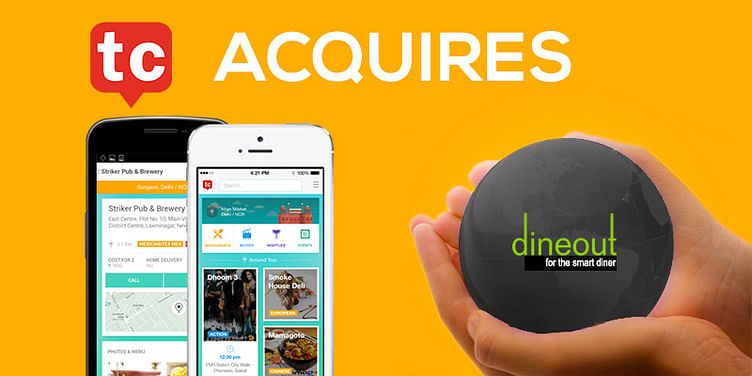 Timescity is the lifestyle portal of Times Internet that wants to be the one-stop shop to locate, access information about restaurants and nightlife establishments in India's metropolitans and other popular cities. It has been making rapid strides off late and today announced that it has acquired Delhi based Dineout, a restaurant booking website. The financial details haven't been revealed but the entire DineOut team (barring a couple of individuals) will be joining Timescity.

What to do the acquirers have to say?

Miten Sampat is the Business Head at Timescity. We spoke to him and he had some interesting things to share. “Our vision is to be strong in the entire 'discovery to destination' funnel for consumer who is looking to eat outside. Dineout solves the last bit about restaurant booking very well,” says Miten. The team was definitely one of the biggest factors while considering the acquisition. At the onset, Timescity had partnered with Dineout and two other portals for hotel booking but the amount of traction that Dineout was driving and the kind of service Timescity saw from Dineout is what made them go on to make the acquisition offer.

“We are happy to share that Dineout has been growing rapidly, and had a number of investment opportunities from leading investors. They chose to be acquired by TimesCity, as the merits of our offer and our platform provides a bigger & better opportunity to realize their vision,” says Miten. Previously, in August 2013, Timescity had acquired mood-based food search platform Gawbl. The discovery and fulfillment process for restaurants, events, and nightlife is evolving rapidly. Talking about it, Miten adds, “There is tremendous room for innovation, and therefore you see a lot of entrepreneurs focused on the space. I believe this trend will accelerate along with the growth of mobile. This trend is great for consumers and merchants both.”

From the founders' Point of View

Co-founded by Ankit Mehrotra, Sahil Jain, Nikhil Bakshi and Vivek Kapoor, Dineout was one of YourStory's WebSparks and was doing 15,000 bookings per month in NCR and Mumbai when we last wrote about them. “We had initially raised a small round and were now in talks to raise a series A but the terms we got from Timescity were much more friendly and we decided to go ahead with the deal,” says Vivek. Currently a team of 24, the entire Dineout team will be joining Timescity where they'll operate as a separate entity.

It makes a lot of sense for the team at Dineout because they'd have had to raise money to scale and market and in the process they'd keep diluting themselves. With Timescity, they get the reach instantly and makes it a lot more simpler to scale as the incessant need to raise money goes out of the window. “We're extremely happy with the terms that we've got and you could now very well see us in six cities by the end of year,” says Ankit.

Related reads: All the startup acquisitions of 2013 in India