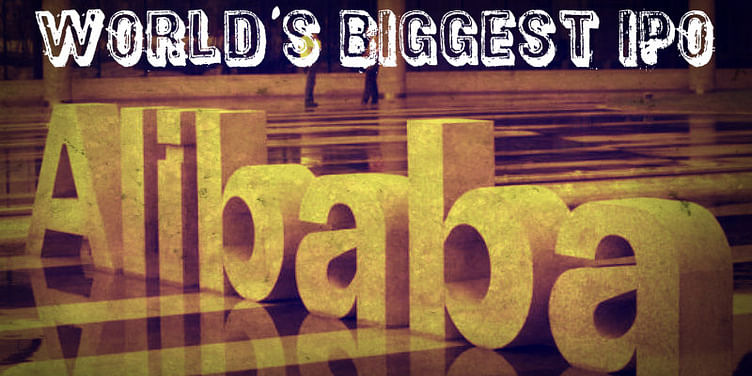 At the age of 12, a Chinese boy would religiously listen to ‘Voice of America’ broadcasts every day. He wanted to learn English, but the options in China were limited. He would speak to visitors from the US and offer them guided tours for free. He failed the entrance exam twice before enrolling at Hangzhou Teachers College. He then graduated and started to teach English at $15 per month.

By this time, he had become proficient enough in English and in 1995 he got a part-time job as an interpreter for deals between Chinese and American businesses. It was during this time that he got to visit a friend's home in Seattle, and encountered his first computer and the Internet. Jack Ma came back to China and started a China Pages for small businesses, to help establish their web presence. Ma then launched Alibaba.com in 1999, a B2B marketplace.

Alibaba filed for its IPO in the US yesterday, and it is essential to take a step back and look at its journey since Jack Ma started as a tour guide and finally gave shape to the e-commerce behemoth that it is today.

It would be wrong to call Alibaba just an e-commerce company. It is China’s, and by several measures, world’s largest online commerce company. The Alibaba group comprises of Taobao, Tmall, and Alibaba.com. In total, the group has hundreds of millions of users, and a marketplace with millions of merchants and businesses. Alibaba handles more business than any other e-commerce company. More than $240 billion of merchandise changed hands on Alibaba in 2013. This is more than that of Amazon and eBay combined!

[Editorial update] Flipkart has since raised additional rounds of funding which puts its valuation anywhere between $5B - $7B, according to industry experts. Hence, at their best valuations (as of August 10, 2014) Alibaba could be worth 35 times that of Flipkart.

Alibaba by the numbers:

7 million merchants on the platform

Projected valuation of the company after IPO = $150 billion

To put that number into perspective, India’s homegrown ecommerce leader and darling Flipkart has a current valuation of $2.5 billion, according to sources. Alibaba’s valuation, according to analysts, could be between US $95-$250 billion which would put it at an equivalent of almost 100 Flipkarts.

Flipkart just hit a GMV of $1 billion a few weeks back. Alibaba’s GMV for the year of 2013 was 240 times that of Flipkart.

It is really not fair to compare Alibaba, a 15-year-old company in the most populous country of the world with a much better smartphone penetration, with Flipkart. China’s e-commerce market was pegged at $74 billion in 2010 which grew 4X in three years to $295 billion in 2013. It is projected to be a $713 billion market by 2017, which is more than the entire GDP of Switzerland. Last year, Alibaba accounted for 80% of China’s online shopping market.

With an estimate for the IPO ranging between $95 billion and $250 billion, Alibaba will join the list of the most valuable technology companies of the world – the likes of Apple, Google and Microsoft.

Comparing Alibaba with Amazon and eBay

It is an online commerce company, a search engine, a bank, a shipping service, a messaging platform and, a media house – all in one package.

TaoBao – Taobao is Alibaba's marketplace for sellers with more than seven million merchants on its platform. Users are free to use the service and even sellers can list their items for free. Taobao makes money from advertisements and the sellers pay too to stand out from the crowd with featured listings.

Alibaba.com - The primary company of the group is the world’s largest B2B trading platform for SMBs.

The company’s English language portal Alibaba.com, a major boon for English-speaking population, enables sales between importers and exporters from more than 200 countries and regions. The Chinese portal 1688.com is the domestic version for the same. In addition, AliExpress.com accords smaller buyers the facility to buy small quantities of goods at wholesale prices.

Tmall.com - Started in April 2008, Tmall is the website which sells global and elite brands.

Alipay - Alipay.com is a third-party online payment platform. The best part is that there is no transaction fees involved.Alipay controls 50% of China’s 600 million online payment accounts. More than 300 worldwide merchants use Alipay to sell directly to consumers in China. Transactions in 12 foreign currencies are supported by the payments wing of Alibaba.

Alipay has an escrow feature which ensures that the buyers have the assurance of delivery and getting the right product.

Juhuasuan - Juhuasuan.com is a group shopping website, similar to Groupon which offers ‘flash sales’, products that are available only for a fixed time period.

eTao - eTao.com is the search engine to compare prices from different websites. You can search for products, sales and coupons.

AliExpress - AliExpress is an online retail service for small offline sellers to sell their products to online buyers.

Laiwang - Laiwang is the company’s answer to the hugely popular chat and messaging service from China, called WeChat.

ChinaVision Media Group - Recently, Alibaba acquired a 60% controlling stake in the media group to better position itself against its rivals Tencent and Baidu.

Youku Tudou - Last month, Jack Ma acquired a stake in Youku Tudou, which broadcasts a series of popular television programs and other videos over the Internet, sort of like China’s YouTube.

Ma enjoys a cult status within China and outside. A charismatic leader known to have a flair for the wild, 49-year old Jack is referred to as ‘Crazy Jack’ by the employees and also doubles up as their ‘spiritual leader’.

Last May, Jack Ma stepped down from his role as the CEO of the company. And he did this with some fanfare and pizzazz by singing Chinese pop songs in front of the 40,000-strong Alibaba Group employees and customers.

But even after the multi-billion dollar IPO, the corporate structure will ensure that Ma, who owns about 7% of the company, has a say in nominating more than half of its board. Ma also owns 46% of the holding company that controls Alipay. Interestingly, this is the reason why Alibaba is being listed in the US because Hong Kong did not allow this kind of a structure.

Ma’s 9% stake in the company means that he is the third wealthiest man in China and that number will definitely shoot up depending on the showing in the IPO.

Who owns how much of Alibaba?

Alibaba’s history with Yahoo! And Softbank

In 2000, a group of investors led by SoftBank invested US $20 million in Alibaba. In 2003, a joint venture was established with SoftBank for the development of the Taobao Marketplace. Through a series of investments totaling US $50 million, SoftBank subscribed for shares in the Taobao. In 2003, SoftBank purchased US $30 million in convertible notes, which SoftBank subsequently converted into ordinary shares.

In 2012, a share repurchase agreement was entered into with Yahoo pursuant to which Alibaba repurchased 523 million of shares from Yahoo for US $7,082 million.

Future of Alibaba and challenges

China’s middle class is expanding much more rapidly as compared to India, which means that they are increasingly shopping online. This means that Alibaba is competing with rivals who have the pulse of the mobile population. Tencent owns China’s most popular messaging app WeChat which had 355 million monthly active users as of last year. Tencent has a sprawling collection of businesses, including games for PCs and smartphones, and another messaging platform QQ which had more than 800 million monthly active users at the end of last year. This gives it a very good positioning to go after the smartphone buyers.

Alibaba is trying to tap into the same consumer base. It has a stake in Sina’s Weibo, a twitter-like microblogging platform which has 144 million monthly active users as of March, 2014. It has already invested in entertainment and gaming businesses via Chinavision Media (60% stake) and Youku Tudou (17% stake).

Alibaba is also exploring new frontiers by getting into financial services. Alipay payments app is now being used to buy theater tickets and pay for taxis, and even invest in money-market funds. The fund is called Yu'e Bao and it has already collected $87 billion in assets. China's banks and regulators are starting to get alarmed which means that Alibaba will come under massive scrutiny going forward.

It will be interesting to see how the US investors respond to the Alibaba IPO. Very few of them are familiar with Chinese markets and especially with the workings of Alibaba. The very fact that the IPO has been hyped so much might cause problems for Alibaba. Analysts predict that the IPO might value the company anywhere between pessimistic estimates of US $95 billion and ultra-optimistic estimates as high as $250 billion.

What this means for India?

Flipkart is already getting hit by Amazon’s entry into India. There are several players on the e-commerce bandwagon and competition among them has surely meant heavy discounts for the Indian consumers. The smartphone penetration is still negligible, but increasing rapidly. As more and more Indians acquaint themselves to shopping online, the revenues and GMVs will only see an upward trend. Flipkart hit US $1 billion in GMV a year ahead of its own estimates. This augurs very well for the industry. The investors already see merit in consolidation with common investors of Flipkart and the fashion e-tailer Myntra looking to merge. To take on the likes of Amazon and eBay, this may be the best strategy.

Alibaba’s aggressive nature ensured that eBay was sent packing from China. Indian e-commerce companies also need to saddle up to the competition, and fast.

How do you see the online commerce market in India shaping up? Do you believe that Flipkart has the legs to go on to become as big as Alibaba?

Alibaba’s latest update in the SEC filing shows that it aims to raise over US$20 billion when it lists eventually. At the upper limit, Alibaba would raise $21.13 billion. This raise means that it will be more than the $16 billion raised by Facebook in May 2012. Alibaba will, hence, as predicted above, be the biggest IPO ever in the United States.