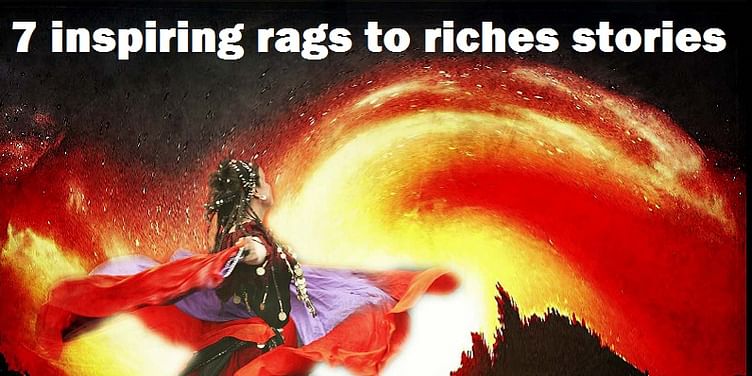 This is one genre of stories that has enjoyed an ever-lasting appeal: rags to riches tales. Stories of heroic struggle against odds, survival and eventual triumph have always inspired people, given them hope, courage to fight, and egged them on to persevere. Here, YourStory brings 7 such fabulous stories from around the world, which we believe, would ignite your never-say-die spirit and inspire you to become all that you can be.

1. The steel tycoon who grew up in a one-room weaver's cottage: Andrew Carnegie

This American industrialist, the founder of Carnegie Steel – a company that produced more steel than all of Great Britain at one point – was born to a poor handloom weaver in Scotland.He grew up in poverty, living in a one-room house, often sleeping to "forget the misery of hunger". To fight starvation, his family migrated to the US.  His first job was at age 13 as a bobbin boy, changing spools of thread in a cotton mill 12 hours a day, 6 days a week in a Pittsburgh cotton factory. In his spare time, he would read works of Robert Burns and historical Scottish heroes like Robert the Bruce, William Wallace, and Rob Roy. His next job was as a telegraph messenger boy. A true entrepreneur, he was a hardworker, and soon was promoted as an operator. Colonel James Anderson, who opened his personal library of 400 volumes to working boys each Saturday night, gave a good boost to Carnegie's education and passion for reading. He did a series of railroad jobs. There, he learnt about the industry and business in general. It was during this stint that he began making investments in steel and oil companies that earned him huge returns. By 1889, Carnegie Steel Corporation was the largest of its kind in the world. He went on to become become the richest man in the world.

Known as one of "builders" of America who helped shape the nation, in 1901, he sold Carnegie Steel to JP Morgan for $480 million and became a philanthropist. He donated millions to the New York Public Library, established the Carnegie Institute of Technology in Pittsburgh, which is now known as Carnegie-Mellon University, created the Carnegie Foundation for the Advancement of Teaching, and formed the Carnegie Endowment for International Peace.

Remember, the journey began in a one-room weaver's cottage in Dunfermline.

2. The retail giant who had to milk cows, deliver newspapers: Samuel Walton

This American entrepreneur who built a small grocery store into the giant Walmart supermarket chain, amassing a fortune of over $23 billion, grew up during the Great Depression.He had numerous chores to help make financial ends meet for his family as was common at the time. He milked the family cow, bottled the surplus, and drove it to customers. Afterwards, he would deliver Columbia Daily Tribune newspapers on a paper route. In addition, he also sold magazine subscriptions. During his college, he worked various odd jobs, including waiting tables in exchange for meals. After graduation, he joined the US Army during the World War II. After the war, he left the military and started managing a variety store at the age of 26.

He took a loan to buy his first store, and thanks to simple innovations in business, he soon bought his second store. Within 3 years, his sales volume grew to $225,000. The first true Wal-Mart opened on July 2, 1962 in Rogers, Arkansas. The rest is history. Forbes ranked Sam Walton as the richest person in the United States from 1982 to 1988. At the time of his death in 1992, he had 1,960 Wal-Mart stores, employed 380,000 people and clocked annual sales of about $50 billion.

3. The Queen of all media who was raped at age 9: Oprah Winfrey

Best known for her multi-award-winning talk show The Oprah Winfrey Show -- the highest-rated program of its kind in history -- Oprah Winfrey is dubbed as the 'Queen of all media' and ranked as the richest African-American of the 20th century.She was born into poverty in rural Mississippi to a teenage single mother. She was later raised in an inner-city Milwaukee neighborhood. She has often spoken about the hardships she experienced during childhood, saying she was raped at age 9 and at 13, after suffering years of abuse, she ran away from home. She became pregnant at 14. Her son, she said, died in infancy. While in high school, she landed a job in radio and began co-anchoring the local evening news at the age of 19. She got transferred to the daytime-talk-show arena because of her emotional ad-lib delivery.

She became a millionaire at age 32 when her talk show went national. She is credited with creating a more intimate confessional form of media communication. Forbes' international rich list has listed her as the world's only black billionaire from 2004 to 2006 and as the first black woman billionaire in world history. As of 2014, she has a net worth in excess of 2.9 billion dollars and has overtaken former eBay CEO Meg Whitman as the richest self-made woman in America.

4. The CEO of Oracle who was born to an unwed Jewish mom: Larry Ellison

Larry Ellison was born in New York City to an unwed Jewish mother. His father was an Italian American US Air Force pilot. According to Wikipedia, Ellison contracted pneumonia when he was nine months old and his mother gave him to her aunt and uncle for adoption. His adoptive mother was warm and loving, while his adoptive father was unsupportive and distant.He was a bright but inattentive student. He left the University of Illinois at Urbana-Champaign after his second year without taking his final exams because his adoptive mother had just died. Later, he attended the University of Chicago for one term, where he first encountered computer design. In 1966, aged 22, he moved to northern California.

In 1977, he founded Software Development Laboratories (SDL) with two partners and an investment of $2,000. In 1982, the company became Oracle Systems Corporation after its flagship product, the Oracle database. Currently, Ellison owns stakes in Salesforce.com, NetSuite, Quark Biotechnology Inc. and Astex Pharmaceuticals. In September 2011, Ellison was listed on the Forbes List of Billionaires as the fifth richest man in the world. Ellison is still the third richest American, with a net worth of about $36.5 billion.

5. The richest man in Asia who had to quit school at 15: Li Ka-shing

This Hong Kong business magnate, investor, and philanthropist is the richest person in Asia, with a net worth of $31.9 billion, according to the Bloomberg Billionaires Index, as of April 16,2014.He was born in Guangdong province, China. After his father's death, he was forced to leave school to support his family before he turned 15. He found work at a plastics trading company where he laboured 16 hours a day. After years of back-breaking work, he was able to start his own company, Cheung Kong Industries.

According to a Harvard Business School article:

"From his humble beginnings in China as a teacher's son, a refugee, and later as a salesman, Li provides a lesson in integrity and adaptability. Through hard work, and a reputation for remaining true to his internal moral compass, he was able to build a business empire that includes: banking, construction, real estate, plastics, cellular phones, satellite television, cement production, retail outlets (pharmacies and supermarkets), hotels, domestic transportation (sky train), airports, electric power, steel production, ports, and shipping."

Today, Li's businesses cover almost every facet of life in Hong Kong, from electricity to telecommunications, from real estate to retail, from shipping to the Internet. The Cheung Kong Group operates in 55 countries and employs over 260,000 staff worldwide.

When Facebook announced that it was buying mobile messaging startup WhatsApp for $19 billion in February 2014, that caused quite a stir. Jan Koum, the startup's cofounder became the most talked about entrepreneur overnight. Media reported that the WhatsApp floored Mark Zuckerberg so much that the record offer was made so that the two could become "friends."

A true rags to riches hero, Koum was born and raised in a village on the outskirts of Kiev, Ukraine, as the only child of a housewife and a construction labourer. Forbes reported that his house has no hot water, and his parents feared that their phone was tapped by the State and so rarely talked on it. He immigrated to California with his mother when he was 16. He used to sweep the floor of a grocery store and stood in line to collect food stamps. By 18, he was an expert computer hacker.

In 1997, Koum was hired by Yahoo as an infrastructure engineer, shortly after he met Brian Acton while working at Ernst & Young as a security tester. In January 2009, Koum bought an iPhone and realized that it would spawn a whole new industry of apps. On his birthday, February 24, 2009, he incorporated WhatsApp Inc. in California.

India too has its share of rags to riches heroes. And Dhirubhai Ambani is one of the best knowm among them. This founder of Reliance Industries was one of the three sons of Hirachandbhai, a school teacher, and Jamanaben. He also had two sisters. An anecdote from his childhood is that he once bought a tin of groundnut oil on credit from a local wholesaler and sold the oil in retail on the roadside. He earned a few rupees as profit from this transaction. Apparently, during weekends when his school was closed, he used to set up bhajia stalls at village fairs to make ends meet at home.According to R-ADAG, when he was 17, he went to Aden (now Yemen) in search of opportunity, and worked as a dispatch clerk for A. Besse. That was in 1949. A couple of years later, the company became a distributor for Shell products and Dhirubhai was promoted to manage the company's oil-filling station at the port of Aden. It was here that he dreamed of setting up and owning a refinery, which he later realized with his petrochemicals venture. After returning to India, he started his first textile mill in Ahmednagar. Though his businesses were a huge success, there were also issues regarding Ambani's control over stock exchange. His detractors accused him of illegal or unethical transactions and acts but an investigation by the RBI did not find any evidence of it. By 2007, the combined fortune of the Ambani family stood at $60 billion, making Ambani’s the second richest family in the world.