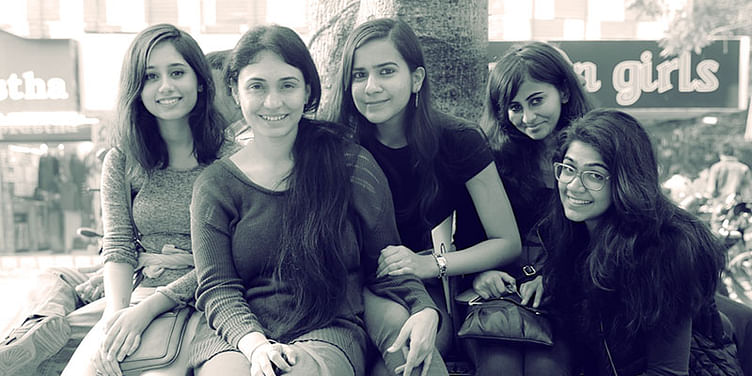 Harassment of women is rampant in India. Every aimless flirt, roadside jerk or crank caller can’t be reported to the police despite the fact that all of them affect the woman at the receiving end.

“Statistics revealed by the Government of India declare that every 20 minutes a woman is raped in India. India’s Union Home Ministry says India is ranked third in rape figures after US and Africa. If every 20 min someone is raped and not all rapes are reported, can you imagine the number of women who get harassed on the streets everyday?” questions Elsa Marie De’Silva.

The 2012 Delhi gang rape of Nirbhaya had the nation in an uproar. The brutality of it shook the very core of our being. Three women were so shaken by the incident that they decided to take matters into their own hands.

Women on a mission

Elsa Marie D’Silva, Surya Velamuri and Saloni Malhotra had met in Sweden a few months before the Nirbhaya incident shook the nation’s conscience. At that time they were working on a joint project to mentor women and were attending a management programme focused on CSR initiatives.

Nirbhaya changed everything. “When the Delhi incident happened, we decided ‘mentoring of women’ could wait for now. The need of the hour was to somehow bring to light gender based violence and map out personal experiences which never otherwise get reported,” says Elsa. Safecity was started to address the white elephant in the room that no one wants to talk about: “Crimes against women, reported or otherwise”.

HerStory spoke to Elsa to know more about their initiative:

It took Elsa, Surya and Saloni just five days to set up Safecity once they decided to go ahead with their plan. Safecity falls under the GIS (Geographic Info System) mapping /geospatial technology and uses open sourced technology Ushahidi which facilitates crowdmapping of information. It is a platform that documents personal experiences of sexual harassment and abuse in public spaces and translates that information onto a map in the form of hotspots or location based trends.

Women can choose to stay anonymous and still report any kind of violence or abuse directed towards them. The primary focus is on reportage of the incident or crime – where it happens (as exact a location as possible), date and time of incident. There are designated categories for identifying the nature of crimes for e.g. rape, sexual invites, groping, a crime against North East Indians or LGBTQ. Very soon disability too will be added to the list. Women can report the crime and share videos and pictures to substantiate it. They can also sign up for alerts on Safecity either based on location or category and receive updates if there are reports of abuse in the neighbourhood that they frequent.

“We also have a missed dial facility for those with no internet access where they can call 09015 510 510 and it gets disconnected and our team calls them back within 24 hours to get their report. They do not have to pay for the telephone call,” says Elsa.

Safety in your hands

Safecity is in preemptive space where the main focus is on information sharing so that women can stay safe. This differentiates it from other safety apps in the market most of which

are in the reactive space where the focus is on the SoS functionality.

To give an example, if you want to watch a movie or eat at a restaurant or stay at a hotel, you will seek reviews either from friends or from a website. But for safety there is no such resource. “We are trying to create that. It will then help you take the most informed decision for your own safety,” says Elsa.

The hope is that Safecity can show the trends of public harassment and abuse that can then enable law enforcement and administration to take appropriate steps and, also enable citizens to be engaged in doing their bit to drive this change.

“Safecity is a very versatile platform and accepts reports from any part of the world. Though we are currently actively mapping in India and Nepal, we do have some reports from Africa, Europe and even the US,” Elsa elucidates.

In India it has 4000 reports from over 50 cities and almost 500 from Nepal. Elsa and her team are creating a database of information that currently does not exist as most of these reports have never been officially reported. This also goes to show that women are not shying away from reporting such incidents.

According to Elsa, “We are very new in the social space but everyone wants action. They fail to understand that collection of information (which does not exist) is the biggest challenge. Once you have the information, you can then analyse it and design very effective solutions which are tailor made for that neighbourhood.” For example the data on Delhi shows Connaught Place, Rohini and Okhla as the top areas where harassment has been reported. The nature of abuse is very different in each locality. Connaught Place has high instances of touching and groping, Rohini has mostly chain snatching cases and Okhla is about comment passing and taking pictures with mobile phones. So while tackling chain snatching will require increased police patrolling, the other two require education and awareness about inappropriate and offensive public behavior and how to tackle it.

Many women don’t recognise sexual harassment because they don’t know what constitutes it as such. It is important to educate them about laws and rights and resources available to them and how Safecity works and can help. To facilitate this Safecity team organizes workshops and seminars for different age groups and different communities and cover a wide range of audience.

They also conduct interactive exercises which help women realise that they are not alone, to stop thinking of themselves as victims and to view the problem with a different lens whilst challenging gender stereotypes, norms and attitudes. We prefer to have a mixed group and not just women as it is important to have these conversations.

While the site is free to report and to view the reports, workshops form the basis of their revenue stream and campaigns that are sponsored by a corporate. They also do a lot of free workshops for the low-income strata.

Elsa says that the data collection they are doing has no precedence and is a huge step towards a safer city. “The more data we collect the easier it will be to look for and select appropriate solutions. We can already see the impact through the response we have received.”

Goa police have asked us for a data dump every fortnight.

At one of our workshops a girl filled up the reporting form complaining about misbehaviour from the attendant at PVR Cinemas who was handing out the 3D glasses. We sent the report to PVR and their CSR department took it up with local HR and corrective measures have been taken.

Local action in Delhi and NCR

Technology raises the level of awareness and connects us to each other in a more profound manner. Elsa says, “if I were to know that at a particular street corner where I was harassed, others got harassed too, my focus immediately moves away from myself (what was I wearing, what time was I there, did I provoke it) to what is it about the location that makes it a comfort zone for the perpetrator.” A case in point is the example of Shakti Mills where multiple women were raped but it did not come to light till the journalist who got raped reported it to the police.

“Clubbed with social media we have managed to spread the word around. We are also very active on social media especially Facebook which we use to showcase our work and to educate readers on contemporary issues. Our twitter account @pinthecreep is a curated account where every week one person tweets on our behalf. We had women reporting stories from their past, sometimes as far back as 20 years. We got a lot of media attention and many volunteers came forward to help us,” adds Elsa.

Elsa works full time with Safecity with Saloni and Surya supporting her part time. Elsa has two full time staff one in Delhi and the other in Mumbai. Over 50 highly committed volunteers complete the circle.

Elsa has lived all her life in Bombay. As an aviation professional she has spent 20 years with Jet Airways and then Kingfisher Airlines. “For me it is extremely important that cities are safe for women because I do not want to limit or curtail my life because I am single or a woman,” Elsa adds.

Surya had a secure life. She and her family shifted base every few years because of her father’s transferable job. She went to Australia to complete her Masters program and came back in 2004. She is working full time as sustainability professional for the past 10 years.

Elsa had many plans for the future. “We would like to get our mobile app out into the market as well as increase the number of reports on our site. We are aiming for 100,000 reports in the next 12 months so that we can truly get everyone to sit up and take notice of the issue. So far we are self-funded besides some revenue we get from workshops. We have just registered as a Sec 8 company (not for profit) and welcome any donations and funds available.

The team aspires that Safecity as a platform would become redundant one day as all our cities; towns and villages would be safe for women. “Till then, we will continue to help women talk about their experiences and continue to engage children, youth and adults to bring in the change within our culture that it is NOT OKAY to either face abuse and harassment or to abuse or harass people. Most of us have faced some kind of harassment and its time we do our bit to make it stop. We do not differentiate between urban, rural, educated or uneducated. We are doing whatever we can. We are open to collaboration and if there are passionate people who wish to help us reach more people, please do get in touch with us at info@safecity.in,” says Elsa.

Surya adds, “I strongly believe that I want my son to grow up in a culture that respects women, men and children and where safety is a given, not an aspiration.”