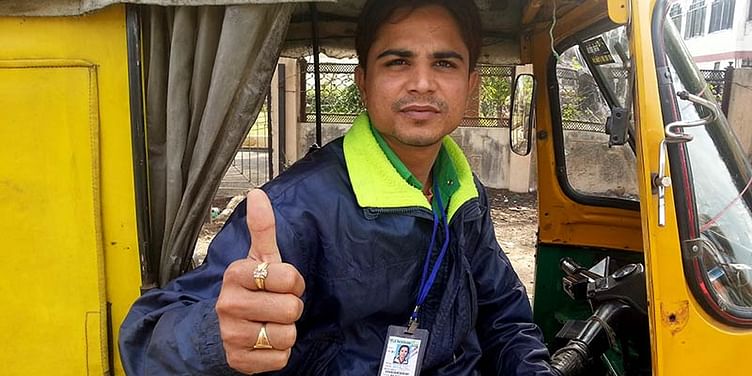 When we talk about cabs, it unfortunately remains limited to tier-1 cities only. However, the problem of transportation is equally common to tier-2 and 3 cities. People in cities like Bangalore, Delhi and Mumbai can avail of Ola, Uber and Taxi For Sure services. Small cities, though, neither have these services nor the ecosystem to support entrepreneurs who wish to start such a service. Karan Vir Singh, a Ludhiana native, decided to change this with Tele Rickshaw, an aggregator service in Indore. The only difference was that this was an auto rickshaw aggregator instead of a cab aggregator; hence, the number of on-ground challenges were far higher.

Karan came to Indore to pursue engineering. This is where he observed the monopoly of auto rickshaw drivers, delay in cab services and lack of safety options in public transport systems. He says, "When cabs could be called at doorsteps through a call, why couldn’t auto rickshaws? I felt the auto rickshaw industry in India was fragmented,  unorganised [sic] and untapped. The very thought of being the pioneer in organising a highly fragmented industry encapsulated me so much so that I dropped out of NMIMS to convert my vision into reality. Everything in the world seemed secondary to me. That was how I began my entrepreneurial journey."

Tele Rickshaw initially started with 50 rickshaws. It’s now expanded to 5000, and set to start its service in Bhopal and Ujjain.

To book a rickshaw, customers can either log on to the website or call their designated number, 9098098098 (The service is available only in Indore). Once the customer mentions his time of journey, pick up and drop location, the rickshaw drivers are notified in parallel. The driver who accepts the request first is redirected to the customer who is then notified about the approximate time and fare of the trip. A confirmation text is sent once the customer agrees. After the journey, customers can pay the driver and collect the receipt.

Though, the model seems quite simple, there were numerous challenges in implementation. Karan says,

Of the 600 drivers we surveyed, only 100 agreed to join us. We planned to organise a meeting for those 100 drivers. With sparse funds, we had to struggle a lot. The meeting for those drivers turned out to be a great débâcle, as not one driver whom we'd spoken to showed up. That was probably the most disastrous day of my life. This did not deter our mettle. We rang the drivers back; some of them refused to recognise us, others didn’t show the same interest as before. However, some 50 drivers were still enthusiastic. It was with them that we started Tele Rickshaw services. However, even after starting up, lack of funds was always pestering.

Initially, when no one knew about Tele Rickshaw, it was very difficult to convince the drivers we were doing something for their own good. The first questions from their side would usually be: “Isse aapko kya milega?” (What would you gain from this?) or “Hume aapko kya dena padega?” (What do we have to give you?) They were suspicious, but once they saw our work, they believed in us. We’re one big family, now.

It was difficult to set fixed rate fares - asking them to go by meters. This was because the drivers were used to charging unfair fares and the government-approved fares were too low. We had to regularise it. After many meetings with rickshaw drivers and government authorities, we got a rate set for us, which was too low to categorise it as “unfair”. It was difficult to change bargaining habits, too. We were already providing them minimum possible fares, and, that too, by meter. But, they were inclined to go without meter and bargain. We are pleased to observe that this habit is wearing off gradually.

Though, it is just a matter of time before cab services enter small markets, Karan remains unfazed. The entry barrier in this field is high, so convincing auto rickshaw unions to join them will be a herculean task.

As safety of commuters is a prime concern, Tele Rickshaw has installed a GPS Panic Button in rickshaws in case of emergency. They’ve been conducting training sessions for auto drivers to educate them, too. These drivers serve around 500 customers every day.

Presently, their main source of revenue comes from commissions and pre-paid booths. They've also capitalised on the real estate of the rickshaws since they’re mobile. This way they can provide visibility to brands. Tele Rickshaw is also partnered with night clubs and event organisers as official travel partners, which helps them in their revenue growth.

Talking about his future plans, Karan says, "In the next five years, we want to expand to more cities and increase the base of Tele Rickshaw. We want to replicate what we did in Indore in other cities, too. Of course, tweaking things in accordance with city dynamics."

It feels good to see such services coming out of small cities as they cater to real India, which is often forgotten when we speak about innovation and big ideas.