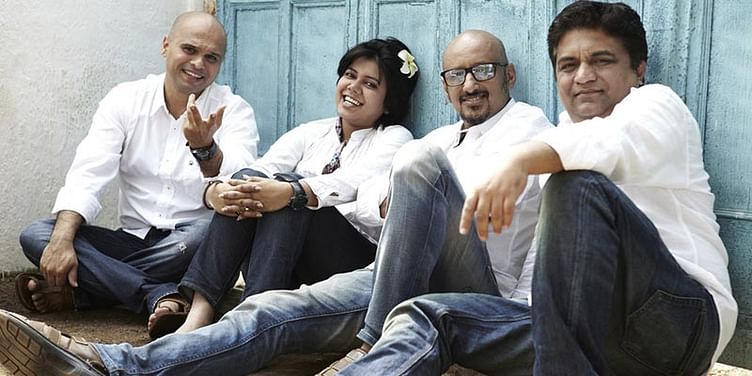 When 19-year-old Krushnaa Patil stood on top of the world’s highest peak, her first emotion was not exultation, but worry. She had taken a loan of Rs 30 lakhs from a bank to finance her climb to Mount Everest, and now it was time to repay. How was she going to do it? This is a question which plagues us all at different times in our lives and is one of the most potent killers of spirit and creativity.

After the climb, Krushnaa spoke about this moment to the Press and at various functions. Unknown to her, there were three men listening and were deeply touched. this triggered them to launch a movement, which is now known as Bawraas.

The three gentlemen were Bollywood composer Shantanu Moitra, lyricist and singer Swanand Kirkire and cricket humorist Vikram Sathaye. They came together to form an entity which is an answer to millions of talented artists who are seeking a right opportunity. Bawraas is a project of love by people who love creativity and want to nurture it with their souls.

Talking about Krushnaa, Shantanu says, “It was the saddest thing. Rather than basking in that sense of achievement of having climbed Everest at this young age, she was worrying about money,” adding, “We came up with the concept of doing a concert to raise money to finance her next climb.” And that is how Bawraas was born.

The seed for Bawraas had already been sown as the three friends would often-- over drinks as it usually happens-- talk about doing something for smaller artists.

Krushnaa had told them that she would listen to Shantanu and Swanand’s songs while climbing and the one that motivated her the most was ‘Bawraa mann dekhne chala ek sapna’ (a crazy heart chasing a dream).

Says Vikram, “This was also our favourite song as in a way it also describes the three of us.” And the name stuck.

So here they were, three men who came from modest beginnings, made it big and now resolved to do something for less fortunate artists.

The question was how? Sponsorship was hard to come by. As Swanand says, “A corporate will never be interested in sponsoring something like a mountain climb because the climber cannot wear your brand or product. Even if they do, who can see it? So it’s hard to raise money for such sports.”

The trio decided to bank on their biggest currency, the immense goodwill that they enjoyed in sports and Bollywood.

The first Bawraas concert took place at Rangsharda in Mumbai two years ago. It had singers like Shaan and stars like VidyaBalan in attendance. With the money raised from the concerts, along with sponsors they managed to pull in, Krushnaa was able to finance her next climb.

That was the beginning. The Bawraas realized that there were plenty of such people who were deserving and talented, but needed a hand to come into the limelight.

“You need to be seriously connected and mainstream to make it,” says Vikram. “There are hundreds of talented musicians and comedians who will never get that chance. So we thought let’s do something for them.”

To start with, they decided to focus on sports and performing arts – the two areas where there is plenty of talent and yet the hurdles are the steepest. Says Shantanu:

“We are a nation of very few heroes. In sports, there’s cricket and in music there’s Bollywood. Anyone doing anything alternate has an uphill climb as a result.”

Hence, their second Bawraa was a Pune-based athlete Ankita Gosavi, who represented India at the Asian Youth Games in 2013.

For Shantanu, this was a natural fit into what was already a passion – promoting folk music.

“I am a mountaineer and I am used to staying in villages and listening to folk music. In India, a folk musician doesn’t have enough to eat while Bollywood music is celebrated. The dichotomy always bothered me.”

“What also bothered me was the fact that the country’s musical heritage seems to be from movies. In no other country does that happen. This 2000-year-old heritage is dying and we should not let that happen.”

Life for this economist-turned-advertising executive-turned-ad jingle composer and Bollywood composer was probably leading up to this point. Shantanu was, after all, the son of a musician, who having faced acute poverty didn’t want his son to go into that field.

“This incredible opportunity that I had been given, there were many people whom I met could do so much better, with even 20 percent of that opportunity. The question was what can I do to empower them further?”

It was no different for Swanand, who grew up in a middle class family in Indorein Madhya Pradesh. He attended the National School of Drama in Delhi and came to Mumbai, to make a name for himself in Bollywood.

“My life is about ‘demythifying’ the process of art. People have been telling me art is difficult and I ask them why. Art should be easy as it’s an expression,” he says.

Swanand made his name as a lyricist and singer, best known for his moving songs in the first season on Aamir Khan’s popular TV show,‘SatyamevaJayate’.

“At times, you need a helping hand, somebody to take care of you. There were people who helped us in many ways, and that’s what we are also trying to do,” he adds.

Vikram, meanwhile, began his career in sports management (inspired by Jerry Maguire) and television before finding his calling in stand-up comedy. He came into the limelight mimicking cricket players and commentators and last year wrote a booktitled, ‘How Sachin destroyed my life and gave me an all access pass to the world of cricket’. Today, he’s a sought-after artist at corporate and sports events.

“We were all drifters, and we reached where we did by drifting. But in India it is hard to be a drifter, unless you have some income. What we are trying to do is encourage people to drift and find greatness,” he said.

The three Bawraas dream of inspiring more successful mainstream artists to go out on a limb for their less lucky counterparts. An open source system of sorts.

“We want to create 100 Bawraas,” says Shantanu,adding, “Each person who reaches the point of power should take up the cause of others.”

“Begging for money it takes something out of you. It kills the spirit. So the idea was that we would take a begging bowl on their behalf and go out seeking money so they can go out and follow their heart.”