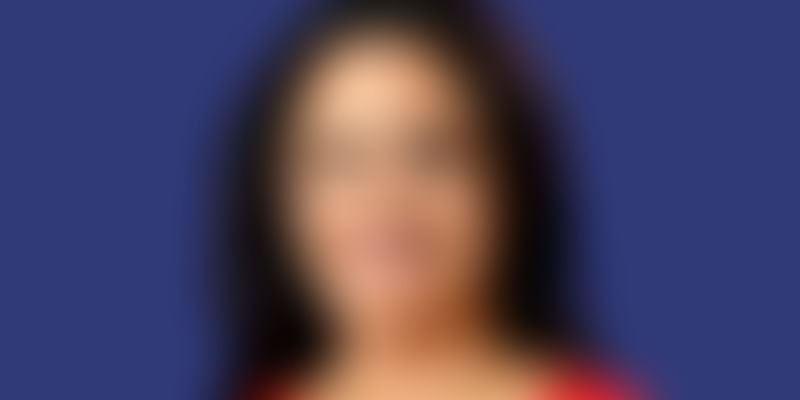 “The first game I was really hooked on to was Farmville on Facebook. I didn’t know I had a fetish for farming until then I would play relentlessly, waking up at crazy hours to not let my crops decay.”

This is a candid confession from Anila Andrade, producer at 99Games. As a kid, she would play Tetris and Bejeweled from where she graduated to playing Time Management and simulation games like Diner Dash and The Sims. Of late, she can be found playing Criminal Case, WordsWorth , Candy Crush and Jelly Splash.

Startup gaming, like most other technical sectors, is male-dominated. However, there are a few women doing good work here too and Anila is one of them.

HerStory spoke with Anila about her journey, her experiences and challenges; and her foray into gaming.

From Muscat to Mangalore

Anila was born in Muscat. Her mom was a teacher and dad an accountant. She is second in line amongst four kids; with two sisters and a younger brother. Her mum decided to move to Mangalore to bring up the kids while her father continued with his job in Muscat. Anila did her early schooling in Mangalore, studied Engineering at MIT, Manipal, and did her MBA through ICFAI.

“My mom used to be a teacher. She taught us the importance of being independent and taking up opportunities that came our way. She’d encourage us at public speaking – write our speeches for us and make us practice until we memorized them and could deliver them confidently. I think that played a very important role in my life – I’ve never experienced any kind of stage fear since I was trained to speak in front of a crowd at a very young age.”

Anila turned out to be an all-rounder. She was studious, competitive and meritorious as a student and into extra-curricular activities as well. She played the violin and clarinet in the school and college orchestra and band. She also played volleyball and throw ball at the university level at Manipal.

From Robosoft to 99Games

It was by fluke that Anila got into Robosoft Technologies, her first company. She hadn’t been aware of the initial screening that had taken place at the campus recruitment, but luck favoured her and she was allowed to write the test. “I was amongst the six students who were shortlisted from a list of about 70.”

Rohith Bhat, CEO of Robosoft, considered her to be promising and gave her a lot of opportunities to excel at work. “In 2008, when the App Store was launched, Rohith decided that it was time for us to start working on games for mobiles and I took on the role of associate producer at a new company 99Games, which was a spinoff of Robosoft Technologies. I’m now in my eleventh year at Robosoft/99Games. I’m game producer at 99Games and couldn’t be happier!”

Foray into the world of gaming

Anila started her career at Robosoft as a quality control engineer and within two years, graduated to becoming requirements analyst where she was responsible for architecting products. “I’d conceptualise and design a blueprint for a product and would work with the programming team to implement it.”

She was amongst the handful of people selected to be part of a relatively new product team at 99Games. The first game she worked on was WordsWorth, a word game that she conceptualized and designed for iPhone. Her long standing games of Scrabble (on a physical board) with her dad whenever he was home on vacation, helped her here. WordsWorth went on to being #2 in the Word Game Category and #33 overall in the US store.

She slowly graduated from designer to producer, which she says, “is quite a fascinating role in this industry.”

Women in the world of gaming

Although well established in the West, the gaming industry in India is just gaining a foothold. There were just a few gaming companies in India back when 99Games started. Since it’s a field where you require a good balance of creative and technical talent, getting the right kind of resources is often a challenge.A few colleges now provide gaming as an elective and there are smaller institutes teaching gaming as a degree. Anila adds, “What I’m trying to get at is that in an industry that is relatively new, there are just a few people who fit in well and a very minuscule percentage of them are women.” 99Games is a team of 24 which has two producers, both of whom are women. “So, that’s a welcome break,” she says with a smile.

The role of a producer requires you to don different hats simultaneously. Anila shares that not only do you need to be a designer, you also need to understand game balance and monetisation, be a good coordinator and get things done, have a good grip on marketing, study game metrics and be a team motivator.

Being a woman speaker representing the gaming community from Udupi in Karnataka at various national and international conferences, leading a team of incredibly intelligent and down-to-earth people and being closely associated with a gaming start-up that’s been responsible for engaging over 20 million users are some of the milestones Anila has achieved.

Every big decision you take is a challenge according to her. Initially it was about the switch – from testing to requirements analysis to gaming – an industry that was relatively new. “I looked at it as an opportunity and jumped at it. Later, it was about trying to figure out how to fit in with the boys at work and let them know I was not a threat; especially since I was junior to some of them. As a lead, it’s a little hard for women; you have so many apprehensions – will you be able to manage their ego, would they accept you’ll be taking decisions for them. Being a woman amongst so many men, it’s always a challenge to speak at professional conferences; trying to get them to listen to you and appreciate your knowledge on the subject.”

Anila loves to travel and meet people, and if travelling alone she is most likely to strike up a conversation with a fellow traveller. A voracious reader, she enjoys watching romantic comedies and spending quite moments with her family and friends.

She is inspired by women like Marissa Mayer, Sheryl Sandberg and J K Rowling. She also considers her family and team as a constant source of inspiration and support.

Message for other women

“Gaming and mobile are a wonderful duo; a great industry to be associated with. Things change so quickly in this industry that if you are not fast enough you miss the bus. It’s the challenge that keeps me motivated. I’m constantly learning and exploring something new. I have a very competitive streak in me and I think that drives me further,” Anila says.

In recent years, more women are taking on opportunities in the gaming space as designers, programmers or in the marketing areas. This is a good sign. Anila’s message for women aspiring to join the gaming sector is, “Gaming is a challenging, ambitious and fast moving sector. This means that there are so many opportunities to seize. Just believe in yourself, explore your creative talent and take the leap.”