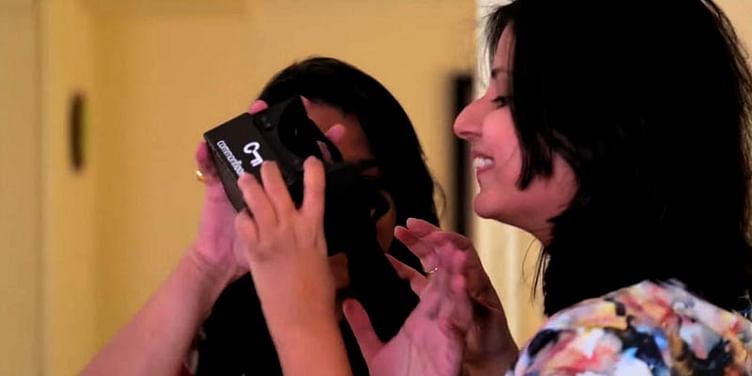 Innovation is taking two things that already exist and putting them together in a new way.

CFRetina is available for the new home projects only and it'll take some time before resales and rentals are included. 20 projects from Bangalore have been covered already, including Purvankara and Sobha developers and another 480 (to take the total to 500) are in the pipeline.

Property buying demands huge time and financial investment by the buyer and it is our constant endeavour to create tools and technology that makes property search easy for the consumer and gives them a wow experience. CommonFloor Retina is a result of one such quest that adapts technology smartly to the consumer’s advantage.

CFRetina is the combination of Google cardboard, an in-house developed app and an android device. To use CommonFloor Retina, a user simply needs to sport the headgear to experience virtual tour of the property of his/her choice. This offers buyers an experience and insights about the property from the perspective of space and ambience among other features. The simple magnet on the headgear acts as a navigation tool. The app also saves the builders the cost and space to construct a model apartment.

How big is this innovation?

While one can always question the pre-existence of the concept of virtual reality, it's the implementation in the real estate sector which has drawn eyeballs here. With CFRetina, CommonFloor is targeting one of the steps of buying a house. Virtual reality is already being used in ecommerce segment and more than innovation, adoption concerns the evangelizing companies more.Sumit says,

An average of more than 20% of the income in a household goes in paying the rent and more than 50% of the wealth is in the form of real-estate only. A prospective home buyer has to go through 60-70 houses which fits his/her search criteria. This is exhausting and time consuming.

While one will still visit the location/house before striking the deal, the job of eliminating from 70 to seven and from seven to one can be taken care of by CFRetina.

The content of the project is shared in a proprietary way between CommonFloor and the builder and is based on the information provided by the builder. It takes around six hours for the CommonFloor team to finish one CFRetina project. Depending on the size of the project, the company charges Rs 50000 to Rs 5,00,000 to the builders.

This opens up a huge NRI market because it's not practical for them to visit India while making choices for property buying. For people based out of other countries, CFRetina will come handy.

How does CommonFloor Retina work?

At the moment, CommonFloor Retina app is compatible with a few high-end Android smartphones. These include Nexus 4 (and above), MotoG 2nd Gen, Samsung Galaxy 4 (and above), MotoX and Mi3. People with these phones can install the CommonFloor Retina application, launch the App and insert the phone inside CF Retina headgear. The headgear is the Google cardboard inspired VR (virtual reality) model which can be purchased on Flipkart and Amazon (for approx Rs 1000).

The user can then experience the property through virtual reality. This video takes you to the tour of CF Retina.

We believe in making strategic investments in building cutting edge technology. We will work closely with the builder community to scale-up the number of projects listed, thereby helping property buyers to choose from as many projects that may want to visit.

CommonFloor is 1000+ member strong with 300 people in technology powerhouse. The company has recently raised an undisclosed amount from Google Capital which adds to the already raised $50 million in earlier investments rounds from Accel Partners and Tiger Global. The company had earlier acquired Flat.to in 2014 and acquihired Bakfy in Jan 2015.

Sumit said that they have a long list of ideas to be executed from in-house talent and hence are not keen on acquisition of product companies. However, he did not completely rule out acquihiring because the company has always been up for the talent acquisition.

Virtual reality comes with its own baggage of practical and physical restrictions. But that should not deter the technology companies from experimentation because if nothing it surely stretches our limits of imagination and sets the base for the next big disruption in the industry.