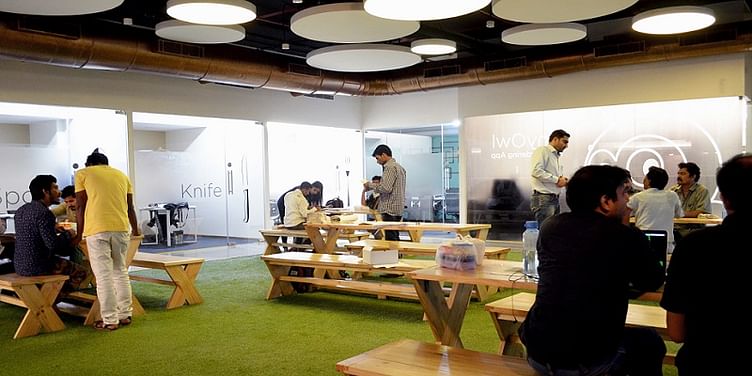 I had a five hour stopover in Mumbai and was wondering which startup to meet. For some reason, I chose TinyOwl and setup a meeting with young Harshvardhan Mandad. Barely 23 with a year of work experience, Harsh ventured out early to startup his own company along with four others from his college, IIT-Bombay. Out of the five, three of them- Shikhar Paliwal, Gaurav Choudhary and Tanuj Khandelwal- had just graduated while the fifth, Saurabh Goyal, was a part of the founding team at Housing.com, another venture backed startup from IIT-Bombay that has seen meteoric growth. Located in the plush Hiranandani area in Powai not far from their alma mater, TinyOwl's office is one amongst the many intimidating buildings in the Supreme Business Park. Just a few floors above TinyOwl, is also one of Housing.com's many offices. It seems like an extension of IIT-Bombay with buildings waiting for more students to start up.

I wait for a few minutes for a lift but they whoosh up and down in front of me. Not able to figure out how those things work, I walked upto the first floor for which I had to climb four stories since there were parking lots which house the hundreds of employees working at the offices here. All my expectations of visiting a small startup had vanished since I walked into the building but my sense of surprise heightened even more when I stepped into the ‘waiting room’ of this start up. I was 15 minutes early and that was some much needed time to regain composure.

There were a couple of people waiting to be interviewed and the quintessential HR lady walked in to usher one of the potential hires. A few minutes later, a lanky young boy with unruly hair came in looking for me. It took me a while to fathom the fact that this young man is responsible for more than 400 people who work at TinyOwl but for Harsh, it is a challenge that doesn't seem to deter him one bit. And maybe that’s why Sequoia and Nexus have trusted this young team with a round of $3 million and probably much more in the pipe.

Two of my pretty important questions got very short answers and a beaming smile.

How did you raise so much money? "It is pretty easy."

How do you manage so many people? "It is not that hard. You have your priorities in order, decide on the things that are most important and stick to it."

More on that later but what does TinyOwl do?

TinyOwl is a mobile first food delivery app. They don’t have a web version. TinyOwl is a mobile app on the Android and iOS that lets users order food from restaurants around them. “Ofcourse hyperlocal is a very key part. Food is such. We have tie ups with thousands of restaurants in Mumbai and aim to give our customers the best experience with food discovery and ordering,” says Harsh.

The story is not very long but it has had a lot of twists. Graduating in 2012, Harsh worked with FutureBazaar for a few months before deciding to quit since it wasn’t doing too well. He was going to join Housing but decided otherwise and thought of starting up. Getting along with the clan at IIT-Bombay, they decided first to start on an aggregation platform for taxis and autos (Ola, TFS and others hadn’t looked at Kaali Peeli’s then). They started work and had discussions with a lot of drivers but somehow the idea didn’t fly. They mulled over a few more ideas before setting eye on food. “People make choices for eating somewhere after they decide on ‘what’ they want to eat. This is where we wanted to come in,” says Harsh. TinyOwl’s aim is to have a very personal connection between people and their food. Food delivery is a crucial part and the technology play is over it where the app wants to help people make all their food related decision. The app eventually wants to become a personal assistant where it can answer questions like- “I want to arrange a party for 8 people, suggest.” The app can then take care of enter process from throwing out options around to delivery.

They raised an angel round from Deap Ubhi (who had earlier founded Burrp which was very successful but went downhill after the acquisition) and Sandeep Tandon. With the angel round and support from IIT-Bombay network, TinyOwl was off to a start. Again in Harsh's words, "it is not very hard". As of now, delivery from hotels is what is operational on the app but the numbers are promising. TinyOwl has been aggressive on marketing and is already delivering 2000 orders a day on average with the number to peaking to 2500 on better days. Their app has more than 100k downloads in Mumbai and they have a fleet of more than 100 delivery boys scooting around Mumbai.

Apart from the fleet of delivery boys, TinyOwl also employs 100 people at their call centre. Most of the operations team sits at their office in Ghatkopar. For data collection, TinyOwl has a team of 50 which is working on making menus of hotels more visual and functional. The technology team has 40 engineers and design team has 15 people who work on improving the app. Apart from this, there is a senior management team which ensures smooth functioning of this team which has grown to 400 in under a year.

But everything is free, how do they sustain?

The app is free for the users. The restaurants also do not have to pay in spite of getting more orders and tools to manage their business. “Yes, everything is free. The focus is only on growth,” says Harsh with a self assured smile. Post the angel round, TinyOwl has raised a series A of $3 million from Nexus Venture partners and Sequoia Capital. Looking at the momentum right now, a series B round of triple the amount cannot be ruled out. "Yes, we are raising more and we are here for the long run," says Harsh when asked about Zomato, FoodPanda and competition.

The team is not very fazed. They know there are probably 50 more people trying to do food delivery now (see Quinto app from Pune which just entered Mumbai). "Zomato was surprisingly late and there are many others now but the best product will win eventually. And we're sure of building that," says Harsh. The venture capital world can have you around in circles- Zomato is not direct competition but of course there is a huge overlap. And both the companies have Sequoia as a key investor. Nexus is the lead investor in Housing.com, and also in TinyOwl which has a founder which originally was with housing. Grofers is another player into hyper local logistics (for groceries right now) which has grown massively and raised a round from Sequoia.

The chase for the millions of users that are coming online in India on mobile and getting comfortable with making transactions online is on big time! And there is enough investor money at their disposal. Consolidation is well under way with first eCommerce, then cab aggregation and will spread to other sectors. TinyOwl is off to a very impressive start in terms of numbers and has placed itself at the intersection of many trends, stay tuned for is steaming hot brew!