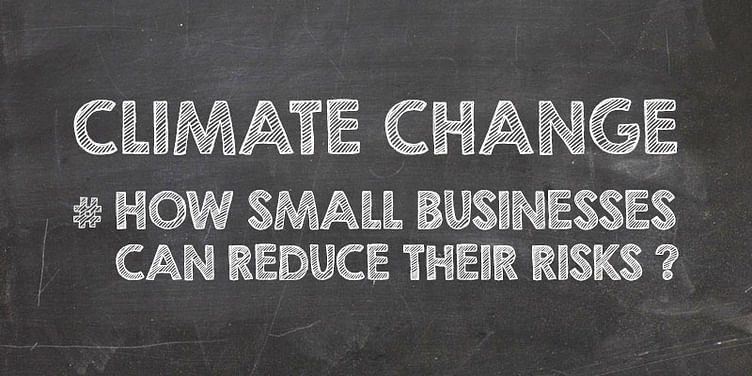 When Hurricane Sandy lashed the east coast of the United States in October-November 2012, innumerable small businesses had to close shop. Some 20,000-30,000 of such establishments went out of business practically in the blink of an eye.

Disasters, especially those linked to climate change, don’t spare anyone. And small businesses are no exception. The Small Business Majority and the American Sustainable Business Council (ASBC) released a report a year later pointing towards the dangers that small businesses face. It asserted that 25 per cent of small businesses take a fatal blow in big disasters – they don’t live to see another day.

Hurricane Katrina, earlier in 2005, had probably wreaked more havoc, but in comparative terms, awareness about climate change and disasters had been relatively low. This 2013 report, however, made a lot of people see reason. Within a year, opinions had changed considerably.

A Washington Post-ABC News poll in June 2014 found that 70 per cent of Americans felt the government should place limits on greenhouse gases from existing power plants, and 63 percent supported cutting emissions even if it raised their energy bills by $20 a month. An NBC/Wall Street Journal poll around the same time yielded similar results, with 67 per cent supporting the Environment Protection Authority’s move to cut emissions from existing plants.

Climate change isn’t an issue there now because it can wipe businesses out with one hurricane. It is so because it can be progressively harder for companies to even operate normally.

So, what is it that small businesses can do to reduce risks? The ASBC suggests four small measures that small enterprises can integrate into their business plans:

The ASBC report had both a word of caution, as well as stressed on the importance of small businesses: “Given their high level of exposure to extreme weather events, small businesses must recognise both their vulnerability to these extremes and their role as critical participants in national climate change preparedness and planning. While climate change has typically driven business owners to strategize around minimising loss, some small business owners have been able to maximize revenue by capitalizing on climate-related opportunities. Responsible for creating two out of every three new jobs over the past 20 years, small businesses will continue to play a vital role in coming years to drive our nation’s economy.”

Weather disasters don’t just strike the United States; people living in a country that was affected by the 2004 Indian Ocean tsunami should know. And it is also not that the subject remains altogether untouched in India – it is, however, true that the issue does not get as much prominence in this country. There are reports to fall back on, good ones at that.

The MSME Umbrella Programme in India, funded by the German Federal Ministry of Economic Cooperation and Development and in partnership with the Union Ministry of Micro, Small and Medium Enterprises and the Small Industries Development Bank of India (SIDBI), has taken up the task of strengthening SME’s capacities with regard to climate change adaptation.

In 2012, the Deutsche Gesellschaft für Internationale Zusammenarbeit (GIZ) and SIDBI, supported by German consultancy adelphi, published the study, ‘Facing the Impacts of Climate Change. Business Risks for SMEs in India’ which analysed the climate change impacts and adaptation needs of Indian SMEs. The study rued that “most Indian companies have not yet begun to understand how climate change will affect them. This is all the more true for India’s MSMEs: For most of them it is a higher priority to manage immediate challenges instead of long- or term risks. At the same time, MSMEs are highly vulnerable to climate risks as they often lack the financial resources to endure even a single rupture in supply or demand, caused for instance by an extreme weather event or a new environmental or climate regulation.”

The document presents facts in the Indian context and outlines how climate change impacts can be integrated into a company’s risk management policy. If this write-up has got you thinking even a wee bit, you might want to get cracking by following the link above.