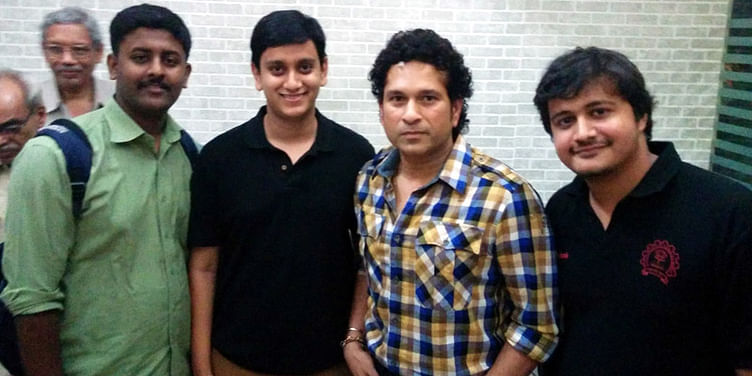 Two IIT Bombay graduates, Ayush Jain and Mirik Gogri, conceptualised Humming Whale Product Innovations Pvt Ltd with a vision to successfully create economically viable products that are sustainable for the market from creative and innovative ideas. The belief that each and every idea -as crazy and absurd as it may sound- has the potential to create a path-breaking innovation drove the founders to start Humming Whale.

Initiated in March 2013, Humming Whale Product Innovations Pvt. Ltd. aims to bridge the gap between an idea and an innovation by providing the right mentorship and approach to the ideators in terms of collaboration, technical expertise or marketing. Based out of a creatively designed office in Mumbai, the company is mainly focused on generating ideas, building them into innovative products and licensing them to companies. Apart from the two co-founders, the team consists of Birva Mehta, who has vast experience in product design, while quite a few co-innovators have collaborated on different products.

It all started when one of the co-founders, Mirik Gogri, was in his final year at IIT Bombay. He constantly discussed innovative ideas with his friends and realised how the lack of right direction and guidance can bury these ideas which otherwise have immense potential to create history. On the other hand, his wingie, Ayush Jain was in sync with Mirik’s ideology. Having worked together before as Mood Indigo Core Group Members, he shared camaraderie with Mirik. Ayush quit his job and joined Mirik as both of them aligned their thoughts and embarked on this entrepreneurial journey. The full workflow began in January 2014.

Ayush pitches in, “It wasn’t exactly a single moment, but it was a gradual realisation process. The small and persistent problems with existing products and the solutions to them are discussed temporarily and forgotten. But few of these solutions’ stuck with us and we decided to work on them. We met and collaborated with established firms in particular fields to understand their processes better. We realised that these solutions, if worked on sincerely and smartly, could actually make viable products. We were fascinated to read and notice small yet effective innovations in products across the world. We believed we had the potential and passion to work on similar innovations and decided to form a company around it.”

The initial idea-to-product outcome was the Rewritable T-shirt, which is a unique t-shirt on which you can write, erase and rewrite. A wacky idea and immense R&D, and voila! The t-shirt was launched with a tremendous positive response among the youth. Currently, it’s selling in good numbers on bewakoof.com, which is the marketing partner for this product. It also got featured on the TV show Bigg Boss with Salman Khan.

The next product was the Cricalarm Mobile App, which is an Android application that allows users to set customised alarms for exciting moments in a cricket match or for their favourite player’s innings. With the help of two app developers, Gaurav Toshniwal and Aaron Dsouza, both IIT Bombay alumni, the app was successfully launched. It received more than 1,000 downloads within a month. To market the app, the founders associated with Cricketwallah, a cricket brand under Ayaz Memon, a prominent sports journalist. This is when the company, Humming Whale Product Innovations Pvt Ltd, was officially formed. Today, this app is the official mobile cricket app of the IPL team Kolkata Knight Riders, who are the partners for this product. It is the best rated app among all IPL teams and won the Mobby's award for the Best Application / Mobile Content in Sports for 2014.

The ‘Gladius Blade’ cricket bat: A new design for the cricket bat making it swifter through the air and safer with the edges

Formerly called as the ‘Falcon Blade’ cricket bat, it has been aptly renamed as the ‘Gladius Blade,’ an allusion to the primary sword of ancient Roman foot soldiers. This product is an outcome of the declining performance of the Indian cricket team on overseas tours, especially when Indian batsmen used to fall prey by edging the ball to the slip fielders. Thus, the idea of a new design of the cricket bat was born. The Humming Whale team researched on the evolution of cricket bat over the years to understand the factors involved while creating the bat. Extensive simulation and software analysis resulted in a bat with a greater downward force when edged, and a better aerodynamic profile- a perfect ‘weapon’ in the right possession.

While receiving immense media coverage from the likes of Start Sports and NDTV, the team also met and took reviews from players such as Rahul Dravid, Sachin Tendulkar and coaches at different levels of the game. They also partnered with SMAAASH, a sports entertainment company, which played a major part in testing, design fine-tuning, marketing and branding on the Gladius Blade. The bat got approved by the Marylebone Cricket Club (MCC). The MCC Sub Law Committee also subsequently plans to modify its laws to allow a minimum width for the cricket bat, which is a huge achievement for the Humming Whale team.

With positive responses from the coaches and cricket experts, Humming Whale plans to manufacture the Gladius Blade and make it available for coaching school kids and test it in normal public. The future plan of the team is to test the bat in an international environment among international players owing to the better acceptance of technology outside India.

This is a recent fun activity the Humming Whale team has come up with. A material named Oobleck has certain unique properties. For instance, it acts like a liquid when being poured, but like a solid when a force is acting on it. By using the right amount of this material, an idea of a fun activity was born - ‘Walking on Water’. After experimenting with the material and a few trial and errors, the team came up with its first test installation in the form of a gamified version of the fun activity at an entertainment theme park, Essel World in Mumbai, which supported the idea. The response from the people, especially the kids, was overwhelming. Currently, this product is being improved and optimised in terms of its sustainability. It’s coming across as a more kid-specific ride with focus on gaming zone and birthday parties. The team believes there’s a huge market and clientele for this product, like college festivals, gaming zones, birthday,corporate parties and major theme parks all around the world.

The founders believe that the company’s focus is on innovation and to constantly evolve with time, which is an important asset. Hence, this bootstrapped company is investing quality time doing comprehensive research and development of new ideas and products. As far as products are concerned, the team is currently focusing on manufacturing the Gladius Blade cricket bat on a large scale and improving the fun activity of ‘Walking on Water’. As a part of community development, the Humming Whale team plans to include the idea of weekly Saturday discussions for idea generation, innovative idea video screenings and brainstorming to encourage the people to think out of the box and get involved in ideation. In addition to this, Humming Whale aims to become a prototyping space by owning its own machinery instead of outsourcing it. With a current team size of three, Humming Whale plans to expand to around 15 by the end of 2015 to delve into the journey of converting ideas into products.

To know more about the company or if you have an innovative idea, check out here