College dropouts and an IIM graduate launch Smartican, a social media site that aims to direct traffic towards topic-based networking 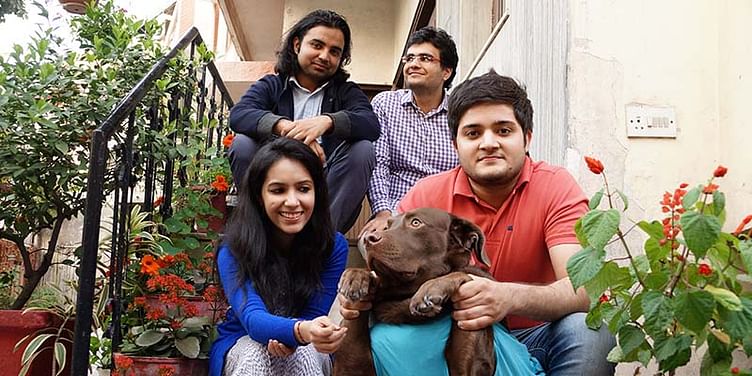 The world is turning into a social hub and while we thought tweets, posts, updates and selfies would rule the roost; a new kid on the block is working towards changing the way we use, interact and engage on social media. Created by Aastha Almast, Charak Almast, Abhishek Puri and Mani Dev Gyawali of Motion Punch Studios, Smartican is a social media site that aims to direct social media traffic towards topic based networking.

"We started Motion Punch Studios as a proprietor firm in 2012 with the idea of creating smartphone games. Within a year, we decided to make our company private limited," says Aastha Almast, one of the Co-founders and CMO.

Motion Punch Studios was started by Charak Almast and Manidev while they were studying their bachelor's in Computer Science with specialisation in game development at the University of Louisiana, US. The dean was so impressed with a game they developed in their second year for a college project that he suggested it be launched in the app stores.

"I had just graduated from IIM Calcutta and loved the idea of working for a startup. So when they asked for my help, I was thrilled and we launched our first game Angry Baby," says Aastha. They soon developed a second game. However, it was in the course of developing the third game, which was coincidently called Smartican that they decided to build it up into a social networking site.

"We realised that there were several gaps in the current social networking scene in India. We found that the sites were not making content visible to a large user base. Sightings were usually restricted to friends and friends of friends. So if you are looking at networking with a larger base for professional reasons, or you want to build on an idea or just have a discussion on a topic, the space is limited. The current networks connect your real world virtually. So the content doesn't actually reach out to those who are looking for that kind of content. This led to the creation of Smartican as a social media portal," explains Aastha.

The basic idea behind Smartican is to make content easy and accessible to the right audience. "The content is well structured so the user doesn't need to hunt for it. It just reaches its right audience," says Aastha. Smartican connects people from all over the globe and has a wide range of content.

Smartican was founded in January 2013 and launched in November 2013; the team took time to develop and finalise the product. The very first topic of discussion where a large audience participated was proposed by a group of students who wanted to talk about the difficulties they face. The concept then grew into an all inclusive portal for anyone to join, discuss and connect with people of similar thoughts and ideas.

"We even have features like anonymous posting as we believe that everyone should be able to talk their hearts out without worrying too much," says Aastha. Speaking about the challenges they have faced, Aastha says, "Since we were creating something new, we found getting initial stakeholders a little difficult. Now we have a different challenge; we need to bring people into our mode of social networking and making them see the difference."

Talking about the evolution and growth of the space, Charak adds, "The features and setting of each portal have been evolving every day. From being an only text centre it has moved to images, videos, calls, chatting etc. The space is evolving every minute. Now, we are trying to push the envelope by creating a virtual world where both content and information are easily available. This isn’t just about sharing personal images and other details."

While most organisations have a problem finding the right person for a job; Smartican doesn’t. "It has taught us that if you do good, interesting and innovative work and are passionate about it, you will find people for the job," says Aastha.

Speaking of its growth so far, Aastha says, "In January 2014, we created a game in partnership with MTV Roadies (smartican.com/roadiesx1) that allowed people to play a fantasy game with their favourite Roadie participants. Roadies fans actively challenge each other on the game and join the world scoreboard." Smartican is not only restricted to user generated content but also content like social games, video sharing, chatting etc. It also plans to start video chatting.

We’re about to launch StartICan, India’s first online startup challenge. It will expose young, aspiring entrepreneurs to mentors from various domains and help them develop their ideas and establish their own successful startups,” says Aastha.’