Tech-at-heart, take a dip into the confluence of ancient Indian arts and science 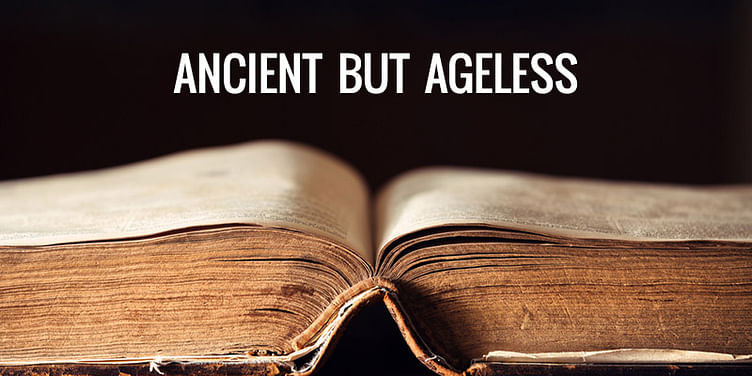 What connects the Amish Tripathi, Pranav Mistry and Manjul Bhargava? I bet the answer is something that connects the crores of Indians across the globe. The Indian scriptural knowledge, be it the ‘as it was’ epics, myriad of Puranas or the contemplative Upanishads, has captured our fascination. It always had and will continue to do so. The versatility of Indian scriptures in terms of rich interpretations has penetrated to grassroots since millennia, which has resulted in what we pride as our civilization. My interactions with people across multiple spheres of life brought me interesting anecdotes.

My mother Usha Krishnaswamy is a soft skills coach by profession and a language teacher at heart. I grew up watching her teach vocabulary to students using anecdotes from the ‘Ramayana’ and ‘Mahabharata’ and the benefits were multifold. She prizes the holistic nature of education that school students would benefit through those stories instead of monotonous rote learning.

My father Krishnaswamy Kumar, a senior advocate at Anantapur, AP, mentions how the immortal stories help putting things in perspective. He says that the villagers who form a large portion of his clientele vouch by them and the anecdotes are endless. One such intriguing tale was about a faction leader reforming himself and his feudal group influenced by ‘Ramayana’. He also admitted to my father about his routine, including reciting some Telugu poems about the epic every night.

A rural entrepreneur, Haritha, says that an anecdote from the ‘Mahabharata’ about Krishna cleaning up the empty leaves and leftovers by the guests at Rajasuya changed the attitude of men in her family. She is happy that from that day, the men started to help women in all domestic chores in her family.

My father added in the end that rural population is more connected to roots than their urban counterparts. But my interactions with the urban peers left me pleasantly surprised. I have been a great admirer of Adi Sankaracharya for his ever inspiring ‘Atma Shatkam’ that emphasizes the limitless nature of the self. My initial years as a startup consultant revealed to me that many entrepreneurs and corporate professionals treat this as a life mantra for inspiration. Geeta Vaidyanathan, a Bangalore-based marketing professional says the ‘Bhagawat Gita’ helps her keep her faith. Remembering the stanzas from there are helpful, she claims, to stay balanced through challenging presentations and negotiations.

A Hyderabad-based founder of a startup applauds the experimental nature of ancient scientists. The mathematical works of Bhaskara II, especially the discovery of ‘infinity’ influences him the most. He also highlights the work done in the field of differential mathematics and series expansion by a 14thcentury mathematician Madhava which evolved later into a comprehensive mathematical branch called Calculus. A coder and algorithm lover at heart, he cites with a lot of zeal, the unique experimental aspects in which classical music, mathematics and literature intertwine. The tech-at-hearts sure have a lot to explore there!

Srishti Rai, an aspiring animation artist from Pune, dreams of building what she calls India’s Pixar Studios one day. The form of Durga as the epitome of ‘shakti’ or spirit is her favourite. The thought of Durga mounted on a lion she says helped her combat a physical condition during childhood and pursue her passion of drawing. A trained Hindustani singer herself, Srishti likes it that music and dance are accepted as a worshipful offering to the divine.

Mahesh, a Physics Researcher based in Australia, a history enthusiast and a dear friend (with whom I have never ending debates), bemoans how the once excellent ecosystem for philosophical debates has just become a largely ritualistic belief system. Citing the rituals followed around eclipses, he asks why people still follow it when it is proven that it is just a periodic celestial conjunction and not some snake devouring the Sun. He blames the fearful theistic attitudes for the loss of the basic ecosystem for debate.

Pavan Kumar Kunchapu, a solution architect at Purnatva Solutions, a Bangalore-based startup, however is more optimistic about the takeaways in Indian ancient literature. He quotes a story of Vikramaditya by Kalidasa which was a part of high school curriculum as his source of strength during tough times. For someone with a humble rural background, Pavan says Bhartrihari’s anthology, also taught in school made him see the positives of life and use every barrier as a stepping stone. Sheelena Shobhate Vidya (character is what glorifies education) remains his favourite quote while facing corporate intrigues.

The round of interaction with everyone left me enlightened about the innocent and intellectual ways people connect to their roots and find solace, inspiration and even ethical caution. My pondering always brought me new questions. As a civilization with multi-millennial history, haven’t we seen shameful and horrendous incidents? We have. Is everything of past as glorious as some of us boast with no dark spots? No it isn’t. Then what keeps it going?

I think it is the ability to question the past without delinking from it. It is the legacy which once believed in conducting ritual yajna to please Indra for rains. It is the same legacy which let Krishna oppose the same ritual and replace it with nature worship of Govardhana. It is the legacy that once advocated division of labour through Varna (caste) classification. But the very same legacy included the Bhakti movement, which challenged such stratifications citing the omnipresent spirit.

Owning the past but adapting to the present, nurturing dissent but coexisting with diversity is what that makes the ancient, ageless. Just the same way the field of science has a place for all the theories from old and disproved to new and empirical. Can science ever age? Generations of thinkers, implementers and reformers contribute to the dynamic culture of the land lying to the east of River Sindhu. The continuous evolution defines its eternal nature – Sanatana - built to last?