From aisles of Walmart to urban farming on Jaipur rooftops, Prateek Tiwari’s journey with The Living Greens 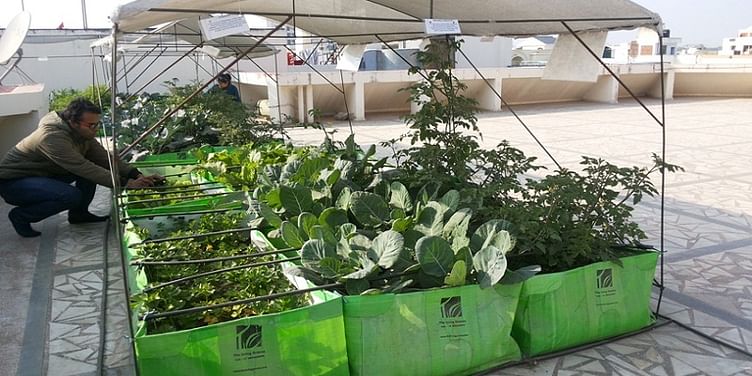 Imagine being a bird flying over Jaipur. Hills marked with turning streets rolling down toward the centre of the city would run under you. You will see spots of water, majestic palaces and an endless patchwork of yellow rooftops.

In 2013, Prateek Tiwari decided to add some green to this scene, providing citizens with light portable greenhouses where they can grow vegetables, fruits, spices and herbs on the top of their houses.

He founded The Living Greens, which is pioneering the urban farming scene in India.

Prateek says, “There are many organisations that educate citizens in different cities to grow their own food. However, we’re the first for-profit company doing this.”He continues, “In 2002, I embarked in an organic farming venture where I was working directly with farmers. After three years, I realised that they will never go 100 per cent organic, because they are often surrounded by chemical cultivations, which make their fields more vulnerable to pests. And a structured organisation to market and distribute products is missing.”

Three years later, these conditions forced him to stop his project. Simultaneously, in a short span of time, he suffered the loss of several friends and relatives, who, for the most part, developed cancers due to wrong diets.

He continued on his successful career at Walmart, but the urge to do something proactive to improve quality of farming kept pushing him. “I had two options,” he says, “either I kept my safe job and let the world take care of itself, or I could do something to make my little bit to improve it.” After some reflections, he connected the dots and realised that the place with appealing potential for an organic farming business was in urban areas. In Jaipur, not only he realised that the provision of fruit and vegetables was very low quality, but “the rooftop spaces were highly un-utilised.” He quit his comfortable job at Walmart, and put his hands back into the soil.

The Living Greens has now opened franchises in Delhi, Indore and Jodhpur where they provide greenhouses of different dimensions made of high-density polyethylene, and installing vertical gardens. For the greenhouses, the company has created a soil-less medium – much lighter than wet soil — which increases its fertility throughout the time when small quantities of an enriching powder is added to it regularly. Their vertical gardens, on the other hand, do not need soil and are ensured a healthy growth, because the team has created special containers combined with a system that recycles water in a loop.

“Each of our products is the result of slow research,” explains Prateek. “Now I know that wherever I send my products they’re going to work, because we have engineered a solution for every minor issue.” He further adds that they offer assistance and maintenance services for Rs. 1000-1500 a month. He continues, “Before selling our products, we study the weather of the place we deliver it, so we can give instructions to our customers. However, we’ve realised that they’re, in most cases, already capable of growing their own vegetables.”

The Living Greens is now planning to open franchises in 10 other cities in the next financial year by establishing new partnership with local vendors. “I receive many mails from young people who say they don’t want to join multinational companies and love the idea of being able to work in their hometown doing something related with the environment.” With this expansion, the team will be able to rise the third round of funding from their internal board of directors.

The 19-member team keeps experimenting. “We’re perfecting solutions to grow vegetables vertically so that people living in flats can grow their vegetables. We’realso developing our own technology for creating terrace gardens either for vegetables or grass. Finally, we’re also developing a model by which people who do rooftop farming can produce compost with their own waste,” explains Prateek, who is also mentoring few entrepreneurs aspiring to startup in the same sector. He remarks that “seeing so many young people enthusiastic about urban farming really encourages me to think this is an innovative as much as sustainable business.”