Meet the bee man of Maharashtra 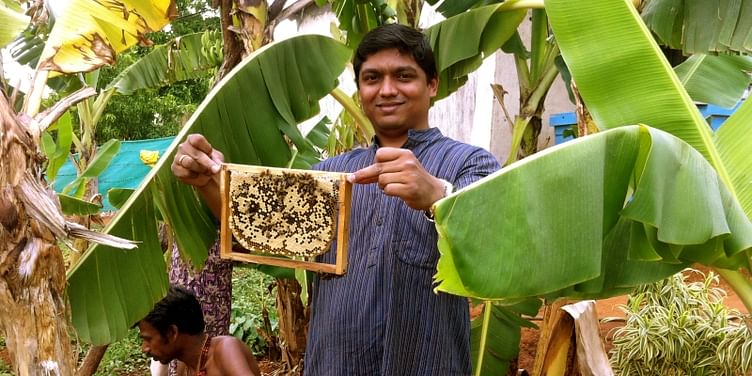 The new name for the butterfly effect is the ‘bee effect’, at least these days. These buzzing clusters of little black and yellow insects pollinate almost 70 per cent of the crops that feed 90 per cent of humanity. But this long and intricate natural chain, created by these busy bees, has been getting altered.The sudden drop in bee populations worldwide is threatening the balance of the ecosystem with unpredictable consequences.

Shrikant Gajbhiye is the Founder of Bee The Change, which offers free beekeeping training to farmers and forest populations in Maharashtra.He argues that when bees are kept alongside farming activities, production increases between 20-200 per cent besides, of course, getting to sell honey on the market.

A study in the UK has revealed that honeybees contribute £200 million a year with the services they indirectly enhance through their activities, and £1 billion with what they pollinate. Similar studies are available in few other countries, but the function of bees in the food chain is the same everywhere. In the US, some species of bees have virtually disappeared, the European Union has admitted their risk of extinction, and in India the number of the insects has drastically decreased – some point out RFR emitted by mobile phones and towers as one of the main causes. And this alarming fall in bee numbers is alarming everyone.

Given these assumptions, talking about ‘bee effect’ to indicate the massive consequences that can result from a relatively small cause, does not seem an exaggeration..This is why Shrikant’s venture is not only about producing honey, but is directed towards broader outcomes.

Two years ago, after graduating from IIM Kozhikode, he took up a five-day hobby course on beekeeping at a government institute in Pune, and fell in love with the striped honey-makers. “I learnt some of the most amazing facts about bees and the role they play in the ecosystem by means of cross pollination.” This opened my eyes not only on the key role bees play in nature, but also on the potential they have in changing the lives of people at the bottom of the pyramid,” says Shrikant.

In the last few months, Bee The Change has trained more than 500 farmers and forest populations, and currently its network counts 50 trainees. “As part of our operations, we meet farmers in rural areas and provide them with bee boxes and free training. Then, once they start bee-keeping, we buy back the honey at a pre-determined price.Ours is a not-for-profit outfit, and we generate income by selling this honey to retailers under our own brand.”

For farmers, the proceedings of honey and wax sales are only one of the numerous gains. Bees are an investment with high returns: the crop yield increases and products become healthier. “Bee-keeping and pesticides don’t really go hand in hand because chemicals cause the insects to die. So the farmers are asked to refrain from using pesticides while rearing the bees,” explains Shrikant. This automatically reduces the use of pesticides. Twenty-five Bee the Change trainees are working towards obtaining the certification for organic farming, which they usually apply for in groups generating cooperative work.

It is not easy to persuade farmers to take up the challenge because beekeeping requires an investment. Says Shrikant:“A bee box costs around Rs.5000 and bees start producing honey only after a few months. Usually, in areas where we haven’t worked before, one out of ten farmers is willing to keep bees for a year. But once this farmer shows an exponential increase in crop production, others follow.”Also, each bee colony can give as much as two more bee colonies through division each year providing additional income.

Srikanth’s organisation works with populations in the forests a little differently:“We train them in techniques of natural honey hunting, which consists in extracting honey from existing combs without hurting the bees. This allows them to increase their income, and bees to be preserved in the wild.”

Shrikant says that there are very few organizations working on a similar models, but most of them working only with farmers, whereas Bee the Change includes populations living in the forests.“Also, these organizations have priced their products in the premium range; whereas we have kept our product accessible,”says he.

Lack of training facilities for bee keeping in Maharashtra, unavailability of bee colonies, difficulties in maintaining a system of support for trainees, getting over negative preconceptions against bees, language barriers, and lack of funds are some of the challenges Bee The Change had to go through. However, Shrikant says: “We dealt with these problems by getting ourselves trained first. We work with experts who help us with training and support, and importing colonies from elsewhere. We believe that exemplifying success stories is the best way of spreading awareness and gaining social interest.”

Currently, the number of colonies in nature is very low. This results in the costs of mobilizing and installing these colonies is much higher than the price of the colonies itself.“We are trying to rear the bee colonies in nature, breed them, and multiply them through our network to such levels that economies of scale can be exploited to increase our operational efficiency,”says Srikanth. Moreover, to further diversify the sources of income, Bee The Change is also planning to start training groups of women to produce organic honey and wax-based cosmetics.The relevance of what Bee The Change is doing is undoubtedly huge and the team, which counts 20 volunteers, seems to have a great time in the process. Shrikant quotes Steve Jobs when he concludes:“Atleast make a dent in the universe, else, why even be here.”

However, in a venture where resources are not abundant and ambition must scale up ten times faster that the venture itself, not a dent, but a revolution is the goal.