A travel startup with a spin - Unventured encourages bicycle tours 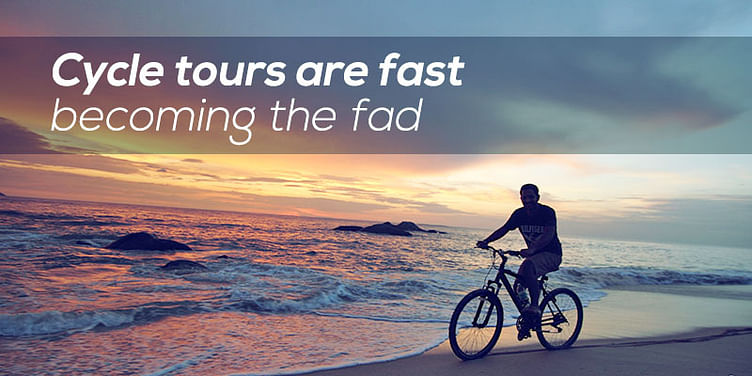 A decade of being in the startup space and a brief stint as a marketeer were certainly not good enough to change the ways of this wanderer at heart. At the very first opportunity, five years ago, Gurudeep Ramakrishna set out with childhood friend to unravel the mysteries of the Himalayas on the picturesque Manali to Leh route. Interestingly, it was a cycle tour.

"We happened to chance upon that route and if words can do justice to that trip, it was an awesome experience," says Gurudeep, who today is the chief ‘unventurer’ at 'Unventured', a travel startup that organizes adventure expeditions on bicycles.

"I realized soon after the trip that I wanted to do the same route again but with different people, so that we can share experiences as we cycle along on that beautiful trail," says Gurudeep. That he has the power to convince people was evident when he managed to get eight different people to do the trip with him and eventually ended up befriending them.

"Not only is it economical to do such trips as a group, it also helps to hear new stories from them. The DNA of these travelers is but the same, all of them want to travel outside the beaten track and explore newer destinations," says Gurudeep.

Towards the end of 2012, he got in touch with his childhood friend Tejaswini Gopalaswamy, who was then fresh from her solo trip to Bhutan. They met up in early 2013 and floated the idea of Unventured, which as an idea is three years old now but is a one-year-old registered company.

It is Tejaswini's interest in history, people and culture that fills her personal travel itineraries. An avid musician, she is trained in playing the sitar, and is Unventured's 'Chief Awesomiser', a title which aptly explains her good humour and quirkiness. With her around, there is never a dull moment for travelers on any trip.

Unventured is currently bootstrapped with money raised by the founders and the revenue stream is through the sale of seats on tours/adventures. The goal is to keep the business lean, with each tour/product responsible for its revenues and profitability.

The company is already in the green with its tour revenues. Capital expenditure is in the form of administrative expenses and the purchase of gear and equipment.

An MBA graduate and marketing professional, Gurudeep has spent the last decade working as part of the co-founding team in technology and non technology startups. While his career focus has been in marketing, he has actively participated in several areas of the business, in the process imbibing the culture of working in startups. Driven by the thirst of knowledge and learning he has actively worked in product development, product marketing, sales and customer servicing. His last stint was with MyParichay, a social recruitment technology startup.

Gurudeep found ‘home’ in the great outdoors, a penchant to connect with people, culture and new experiences that led him to launch of Unventured. It’s his way to bring people, places and experiences home under the deep blue skies.

Tejaswini has a Masters in Advertising, Marketing and the Arts. With an agency background in copy writing, she is a keen traveller, theatre artist, writer and story-teller. Collecting stories of people and places brought her to Unventured.

Perhaps it is the pace of the cycle which allowed her to explore roads less travelled and dwell into the history and culture of the places she has travelled to.

They started with the Manali-Leh route and were overwhelmed with the response they got. They wasted no time in introducing newer trails and now they boast of several itineraries to woo the traveler.

The most popular are their ‘city trails’, where Bangalore is discovered on the bicycle from a historical perspective. There are stories told about colonial Bangalore and the cuisines native to the city now but brought from elsewhere. Add to that the Winston Churchill connection to Bangalore and you have all ingredients thrown in together for a perfect outing.

Next high in popularity are the day tours, ‘Temple and Thindi trails’, where participants venture into some of the oldest temples in the city that date back to the ninth century and beyond. An experience filled with stories of magic, Gods, mighty kings and the allure of kingdoms and dynasties, the trips also introduce the cyclists to a feast of scrumptious breakfast in old quaint joints that are legendary and significant to namma Bengaluru.

There are also ‘Weekend trails’ outside Bangalore to nearby destinations like Coorg, Wayanad, and Ooty which are quick getaways.

For those who want to get a taste of long-drawn adventure, there are long-haul expeditions -- tours in Arunachal Pradesh and Sikkim, even a week-long trip in Goa which looks closely at the Colonial influence, as well as the various churches and art & culture, which also define Goa.

There is the option of customized tours too, for all those who want to customize their road trips. In the month of May, for instance, Unventured has organized a Mother's Day special for mothers to cycle with their kids.

Manali to Leh and the Bhutan trips are certainly their speciality.

"The day tours are certainly interesting, more so for people who have come here from other parts of the country and are now settled here. They tend to love the city more after hearing stories of this place. Particularly fascinating are the community stories, which tell people how several communities came in to make Bangalore their home," says Tejaswini Gopalaswamy.