How carpooling became a hot new social trend in India 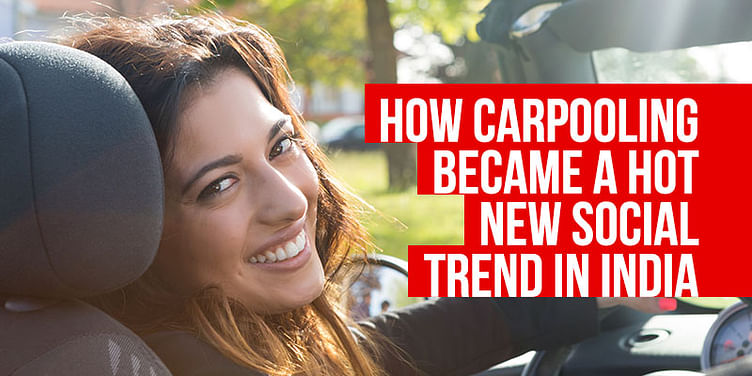 Just like any other IT employee working in Hinjewadi, Pune, Amit Agrawal spent close to 90 minutes travelling six kilometers alone in his car. His frustrations were not about the traffic, but mainly about wasting that time doing nothing.

“Waiting in the traffic, I would look around and realize that almost all the cars around me had single passengers. What a waste! I sometimes even considered pulling down the windows to chit-chat with other drivers near me,” said Amit.

He knew carpooling was a great solution for this problem, but he dreaded it because his job was too dynamic to make commitments to friends or colleagues travelling with him.

“I knew classic carpooling would not work in India. Our worlds are too dynamic and so are our schedules, but some sort of technology-driven adhoc carpooling was definitely going to work,” added Amit, who later downloaded the sRide app on the Google Store.

Lakshna Jha started sRide, a carpooling startup, launched in Pune early this year. This Columbia Business School alum, has been observing the traffic and driver behavior in the city since her last visit, and comparing it to the carpooling scene in the US.

In India, about 16 percent of Indians drive to their workplaces on their own, and about 67 percent of them taking their cars. There has been a lot of positive change in this landscape, when compared to what was portrayed in an article we carried in 2013. (Read here why we thought carpooling might never work in India.)

What’s happening in the sector?

“We strongly believe that Indian ecosystem has changed a lot in the last three or four years. Carpooling is a natural fit to Indian environment as it solves all the four major problems related to commutation, which are traffic, high pollution, insufficient transportation options and high transportation costs,” said Lakshna.

According to Lakshna, the Indian statistics are so impressive that she believes nobody can say no to it after knowing them.

“Before launching sRide, I discussed with so many people about carpooling to work, and they were convinced in less than a minute,” said Lakshna.

What has changed over the years?

Most technology-driven carpooling apps these days work like this: The driver posts a ride on the mobile app, and the algorithm matches riders with car owner automatically. After the ride is done, money is transferred from rider to car owner's account online without any hassles of cash transfer. This also helps in addressing the embarrassing situation of asking people for money.

“I like the fact that I don’t have to ask for money from anybody, and can happily chit-chat en route, it’s not awkward. Also, you won’t believe how many new people I’ve got to know in the last three months of carpooling. I’ve even met more college juniors in my car, than I’ve met on the same floor of office,” added Amit.

A few years ago, the biggest challenges in carpooling used to be social inhibitions and security concerns. Now, with technology, these problems have easy solutions.

“People used to think that it was not very nice to let others sit in their cars, almost like they were possessive about it. Now they are more aware about energy conservation etc. Plus the fact that every rider can link a security profile, like LinkedIn or Facebook, with verifications using company employee ids etc eases the security concern to a great level,” said Arif M. R, Co-founder of MeBuddie, a Pune-based corporate carpooling company.

Carpooling, as a concept, comes under the large umbrella of shared economy, which a recent PriceWaterhouseCoopers report on the global market, estimated at $15 billion today, a figure that is projected to hit $335 billion by 2025.

Experts say that India will get a good share of this market projection.

The last few years have seen startups in the likes of MeBuddie, RidingO, PoolCircle, CarPoolAdda coming up in this space, but the entry of global players like Brazilian Tripda and French BlaBlaCar was the real game changer. It has brought in a sort of validation that the Indian market is ready for carpooling.

Last year, BlaBlaCar raised $100 million in funding from Accel Partners and Index Ventures to explore emerging markets, including India, Brazil and Turkey. The online service that connects private car owners with commuters for long-distance travel launched in India in January this year.

While BlaBlaCar reported that 125,000 people carpooled with them across 700 cities in India, newer startups like sRide are happy with 3,000 to 4,000 customers, and launching one city at a time.

“With large international players entering the market, VC funding and exits will not be a problem. Even we have got more VC interest in the last few months, when compared to the last few years,” added Arif of MeBuddie.

"We are looking at acquiring smaller carpooling companies to scale business in India," said Nitish Bhushan, head of Tripda's India operations in an interview with ‘The Economic Times’.

The other segment that will turn to peer-to-peer ride sharing as a new offering will be taxi aggregators. They are currently in a tug of war with the Indian regulatory authorities for various reasons and will find this channel less restrictive.

Last month, Carzonrent, a car rental company, acquired Bengaluru-based ride-sharing portal, RidingO for an undisclosed amount. This is just one example. Rumours have it that even Ola is looking at carpooling very closely with a beta launch coming up in Bengaluru soon.