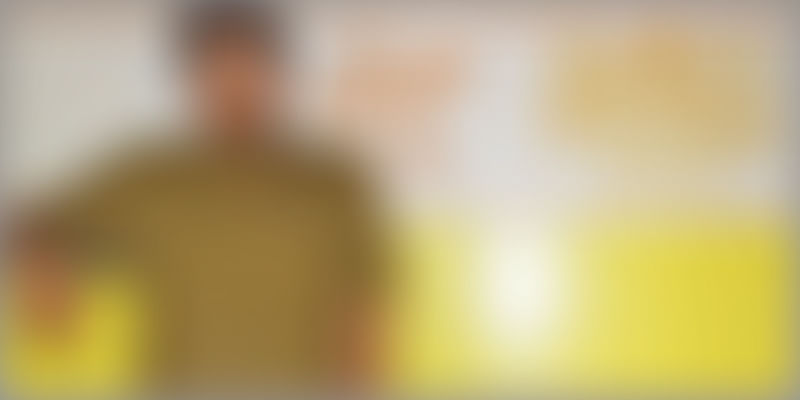 Gulshan Iyer was a regular first year engineering student in a Chennai college till he found that he had the Midas Touch!

As a freshman, who had made the long journey from his hometown Nagpur to the southern metro, he was yet to wean away from home-cooked food. The watery daal and rubbery chapattis of the college canteen did nothing to win him over.

When suffering in silence was no longer an option, he approached the canteen managing committee with a complaint to better the food. “They just threw my request out of the window, and before telling me to get lost, said if I was so bothered I should make my own food,” says Gulshan. Some other poor soul would probably have left the room dejected, but Gulshan, who does not tire of saying that he lives to eat, took up the challenge.

He set up a stove at one end of the college grounds, stocked up on instant noodles – Maggi, if you please – and was ready to rebel by feeding not only himself, but the entire college. “Trust me, it takes more than two minutes to make Maggi,” he points out as an aside. The idea clicked so well that very soon, he and his friends, who joined him subsequently, set up another stove to cater to the growing crowd of hungry students.

By the end of the term, their ‘business’ was so lucrative that when they actually took stock of their earnings, they realised they had made a killing. “We did not bother to familiarise ourselves with any compliance regulations, taxes and so on. We learnt the hard way that it is not making money that is difficult, it is maintaining proper accounts, which is not easy,” he shrugs with a smile.

Wind beneath the wings

Opportunity never comes as a gust knocking down your door. It is rather the wind that you use to power your wings and soar.

Gulshan realised that he had struck gold in more ways than one. He began thinking big and expanded his menu to include wraps and burgers. “We would wake up early every morning and hang out outside the KFC outlet watching the vendors deliver supplies for the day. I would quietly slip our contact details, and some ‘incentives,’ to make him tell us who the bulk supplier of chicken and vegetables were,” says Gulshan grinning from ear to ear.

Staying on his toes taught him to source fresh and cheap raw material for his food items. He also learnt how to keep his customers happy by serving them what they liked.

It is a misconception that students do not want to spend money. If they like what you are serving them they will pay.

He started keeping a tab on who his regular customers were and what they wanted to eat. He would push deals and discounts to them making them his loyal clientele.

He and his ‘partner-in-crime’, Venkatesh MA, designed the menu in such a way that students could perform two tasks -- eating and studying -- together. “Being students ourselves, we figured that a burger may not move well, especially during exam time, because students always have their books open in front of them. We introduced wraps, which were convenient to eat with one hand while holding a book in another.”

Putting these simple yet important learnings into practice made him a popular name in the campus and neighbouring colleges. Everyone started calling his eatery Gullu’s, which was short for Gulshan.

It also brought him trouble. The local on-contract canteen people tried to intimidate him with force. “We somehow managed to deal with it.” What took time to deal with were his parents. “By the time of the final year, my mother was totally disgusted with me. Though she lived in Nagpur, in all our conversations over the phone, she would nag me that I had become a samaiyal kaaran (cook) instead of becoming an engineer,” says Gulshan. His mother’s favourite lament was that no one from their Tamil Brahmin community would agree to marry their daughter to him.

Things came to a head when Gulshan decided to refuse the TCS offer made to him at the campus interview. By the final year, he was thoroughly enjoying running Gullu’s, which he re-named Gullu’s Kitchen. He, however, had to relent and decided to sell off his first outlet. “I had three months time to join TCS, and by the end of the first month, I was bored. I decided to set up another Gullu’s Kitchen next to the first one I had sold off (which was being run by another person).” Gulshan was now competing with his erstwhile outlet. A leopard may change its spots, but once an entrepreneur, always an entrepreneur.

My fukat ka gyan (free wisdom) for entrepreneurs: if you don’t know how to do it, there's nothing more fun than trying it and finding it out yourself. Engineering teaches a lot more than just piling bricks and mortar together, it teaches you to dream.

Today, the TCS offer letter is long lost. Gullu’s Kitchen has evolved and established itself as a well-known brand in college and corporate campuses. “Phase one of our plan is to expand in Chennai and Bangalore with 16 outlets by 2016,” says Gulshan of his plans. His Co-founder and tech brain behind the startup, Venkatesh MA, and he are looking for campus ambassadors for this from all colleges in the above cities.

“We do not have a business background and are in need of a mentor in the Quick Service Restaurant industry space. Someone who has been there, done that - someone who can guide us as we scale up. We have a very strong tech solution at the backend, but we intend to keep the experience of eating to the liking of individual customers. We do not want technology to interfere with that.” They plan to launch their mobile app next month.

Gullu’s Kitchen has five outlets across Chennai and Bengaluru and is looking to hire people who would like to work outside the nine-to-five job cycle. “Our startup is bootstrapped with a one-time investment of Rs 3000 in 2013 and we have built everything from that money. We recently started taking salaries a month ago because of family pressure,” says Gulshan.

Interestingly, he is in the process of hiring two IIT graduates, and another surprise entry is that of his older brother, who was working abroad. “At least now my mother will stop comparing us,” he laughs. Sticking to his guns with grit and perseverance, Gulshan has eventually had the last laugh. His mother sent him to be a civil engineer. He has proved he can build.