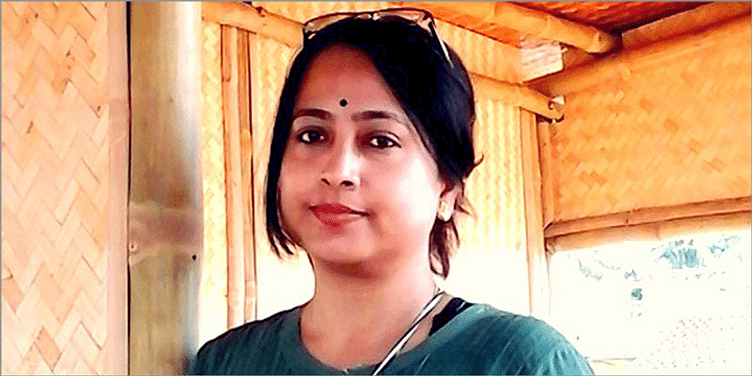 Seven years spent in the North East as a child was enough to propel her interest towards the most renewable resource available around us – bamboo. It was as a one-month child that Indrani moved to Tripura and later to Assam as her father’s transferable job as a senior Finance person at ONGC took the family to different places. It was an enriching experience to stay there amidst beautiful bamboo forests, says Indrani Mukherjee, the Managing Director and Co-Founder of BAMBOOZ. The company originated with a thought – that this should see a renewable resource used in sustainable development. The choice of bamboo as a material was obvious, given that it is abundantly found in India and can give strength to structures.

This first generation entrepreneur is currently based in Bengaluru and through her firm, BAMBOOZ, is reaching out to many organizations urging them to invest in bamboo. It was after working for 13 long years in several MNCs in varied roles that this civil engineer decided to opt for something closer to her heart – work towards providing green and renewable solutions for the society around her.

BAMBOOZ was thus started with a passion and the desire to make it a successful commercial venture. “Having been in the field of conventional construction for so long, deep in my heart I always wanted to create green and sustainable solutions that last, therefore the jump,” says Indrani.

The idea of starting up

Married at a young age, she and her civil engineer husband Samrat Saha were both unable to convince their parents about their startup. It was more about the duo quitting their stable jobs than lack of confidence in them. “Both sets of parents were government employees and were not too familiar with the idea of a startup five years ago,” she says.

Starting a new venture is entirely different from being employed in a firm. “Entrepreneurship is a roller coaster ride where one faces challenges every day. It’s the risk-taking capacity of an individual and intuitive mind which ensures that they survive in the journey,” says Indrani. More so when the company uses bamboo as a construction material which is not widely accepted as an alternative material for construction.

Creating awareness, approaching big institutions and government agencies to invest in their firm and believe in their solutions was itself a huge problem to overcome.

It was all the more challenging for Indrani as she was a woman entrepreneur, solely in charge of her venture – right from the design built to finance to delivery.

The idea of using bamboo as a construction material

Besides being aesthetically appealing, bamboo structures are structurally stable, good enough to last a hundred years. “It is also ideal for buildings in earthquake zones,” says Indrani. They now use bamboo to make various structures like the gazebo, resorts, roof top structures, cottages, eateries, parking sheds etc. Most of their structures are built of Bambusa Balcoa bamboo, which is known for its toughness as a construction material.

Interestingly, BAMBOOZ has already established itself by introducing Bamboo Mat Boards in vehicle body building and got an approval from Association Of State Road Transport Undertakings, Government of India as an alternative material to be used for bus flooring, seats, partitions etc replacing use of conventional ply boards.

Indrani considers her mother and Swami Vivekananda as her role models. From her homemaker mother, she has learnt the art of patience, compassion and the art to be always grounded. Her mother gave up her own career to take care of her two daughters.

Swami Vivekananda’s life and teachings have had a great influence on Indrani’s life and have taught her self-confidence and discipline.

Couple complement each other

Both co-founders of the organization BAMBOOZ, Indrani and her husband Samrat complement each other well. “He always believed in my capabilities and decision-making abilities. It’s great to work with him and have his support at all times,” says Indrani. Their partnership is worth a mention as with their own funds, they started the venture BAMBOOZ in 2010.