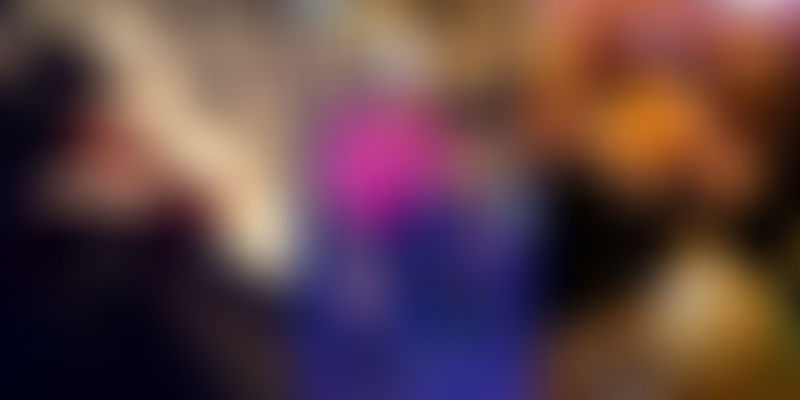 Jostled between the chaiwallas and bhelwallas thronging the Marine Drive in the evening, ‘Salman Khan’ gives tourists a ride in his Victoria, the big-wheeled, flower-decorated, disco-lit horse carriage. Salman recalls his first day in Mumbai when he came there with his family as a tourist.

While we were at the Dargah, peacefully walking around, a commotion broke out with people screaming and running everywhere. In the blink of an eye, I saw a group of men holding swords darting towards us. Scared, my parents tried to gather us and run. Before we could break into a sprint, I saw swords slicing my parents and sisters, leaving them in pools of blood.

He speaks of the Hindu-Muslim riots that he witnessed as an eight-year-old. Needless to say, it changed his entire life. From begging on the streets to his current ‘tangewala’ role, Salman is a true survivor.

Anil Kapoor’s duplicate Navin Rathod sits in the lobby near the Gaiety cinema balcony doors. Under the electric blue lighting, Navin, with his uncanny likeness to Bollywood actor Anil Kapoor, fits in like an accenting element with the kitschy decor and film posters. He has more recently developed a career as Junior Anil Kapoor in most regional movies, and has similarly thrived on the survivor instinct.

For Coolie Number 1036 at the Mumbai Central Railway Station, dressed in faded red shirt and white pants, the eight hour shift has just ended. Sattaram Avhad, 32, hails from Sinnar near Nasik. Faced with financial difficulties in his drought-prone hometown, he had come to Mumbai in 2001. A higher secondary pass out in Humanities, he also pursued a short-term course in Electronics and Computers organised by the state government, but failed to get a decent job. “I am happy to be following in my father’s footsteps – he was a coolie too,” says Dattaram.

Giving these unsung heroes company is Gayatri (8), adorning a blue dress, her big brown eyes gleaming with curiosity, as she sits at the window gazing at the world outside, glistening in the afternoon sun in Mumbai’s famous local trains. This girl is the daughter of Niyati Deshpande, a vendor who sells nail polish, hairclips and hair bands in these trains. Gayatri has dreams in her eyes, and hopes to make it big in life someday.

There is a Bunty Rao, a photographer-cum-lifeguard at Juhu Beach, ferrywala at Mujawar’s Travels (one of the seven islands that make up Mumbai), Amir Mujawar, too, and 49 other ordinary people whose tales have found a place of pride in the book, ‘People Called Mumbai’.

No wonder then that this book was selected at INTCESS (International Conference on Education and Social Sciences) - an annual global platform where the world’s best architects come together to discuss innovative ideas. ‘People Called Mumbai’ was showcased as a first-of-its-kind initiative by a practiced professional.

Appreciate humanity around us

The practice of built environment is strongly rooted in humanities surrounding that space. Unfortunately, we, as a society, fail to give these individuals their due respect. We need to be aware of such extraordinary stories around us, thus the book,

says Nisha Nair-Gupta, the curator of People Called Mumbai: a journey through Mumbai.

Nisha is the Principal Architect at Design (Variable). She has donned the role of an architect, journalist and has also been an active participant in the public art initiatives over the years. She is currently torn between her two interests – design and writing at her studio.

Even this book has an interesting story attached to it. It found its origin in a summer workshop held in Nisha’s office. Modelled like a writing workshop, it had architectural interns from several colleges across Mumbai, and was intended to map the city through personal narratives.

Once work started on it, the writer interns travelled extensively across the city, engaging in numerous conversations – many times with absolute strangers -- and went about the task of collecting their stories. At the end of the workshop, 27 stories of Mumbaikars were penned down.

Interestingly, as more internship applications poured in at Nisha’s firm, the project was extended by another two months, and the number of authors now grew up to 10. Of the 80 stories that then emerged from the length and breadth of Mumbai, 55 were shortlisted, and put together for the book.

The stories of Vikas Dilawari, a conservation architect; Sudeip Nair, the creator of the cultural hub called The Hive in Bandra; Amol Apte, a volunteer at the Lalbaugcha Raja Ganpati Mandal each year; Behram Khosravi, owner of the iconic Café Military at Flora Fountain- these are some of the other memorable stories that have been woven into the narrative.

“There is no better way to know a city than through its people. This book has aimed to reach out across to a cross-section of people – social, political, economic and geographic, and map the city through a humane narrative,” says Nisha.

What has been developed as a framework is what the people associated with this book intend to take forward. There is a plan of exploring this methodology in other cities and even small towns, simply to get up close and personal with the people integral to that city.

Also, there are plans to extend this collective of People Called Mumbai on a digital medium to reach out the stories to many more people.