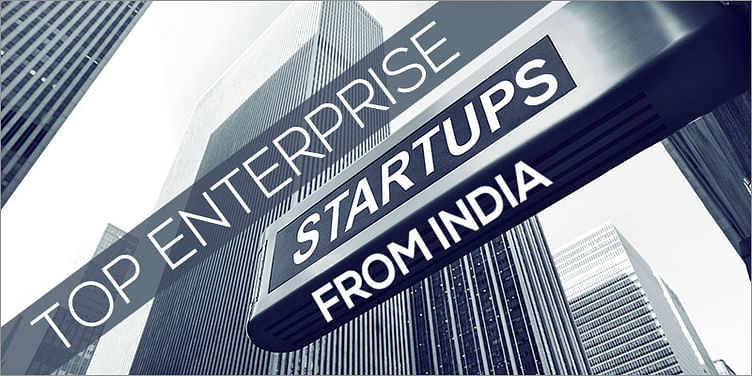 Enterprise startups are not the kind of startups that you hear about every day. This is primarily because they’re not sexy like shiny apps built by college dropouts. But enterprise startups are the ones that build products that sit beneath a lot of other things and provide a technology foundation that helps to make things work better and faster.

Primarily put into two buckets -- Applications which are used by businesses to automate workflow and platforms or tools. This set of startups saw a surge in 2013 and early 2014 with a lot of investor backing. Last year, has been one of consolidation and growth. There are some amazing B2B companies being belt from India at the moment. We take a look at around 30 companies here (which are in no particular order):

FreshDesk: An online customer support software and helpdesk solution. Founded by Girish Mathrubootham, FreshDesk is one of most promising companies coming from India. Started from Chennai, building for the world, FreshDesk recently raised a $50 million series E round and is serving more than 40,000 enterprise customers.

ChargeBee: Subscription and recurring billing software. Co-founded by Krish Subramanian from Chennai, ChargeBee got backing from Tiger Global and Accel Partners worth $5 million and is processing $100 million for their customers annually.

Capillary: Intelligent customer engagement management solutions. Founded by Aneesh Reddy and Krishna Mehra, Capillary is a seven-year-old company that has managed to crack the global market. The company has raised $34 million till now, the most recent of which was a $14 million series B round from Sequoia Capital and Norwest Venture Partners.

Peel Works: Cloud-based tool that helps businesses build a smarter sales force through data analytics. This SaaS venture was started by Sachin Chhabra and raised a $2 million series A round in July 2014.

Helpshift: A CRM for mobile apps which lets the app users to get in touch with the developer. Led by Abinash Tripathy, this startup that went global from Pune raised a $10 million series A round led by Intel Capital and Visionnaire Ventures.

Framebench: File reviews online. Founded by Rohit Agarwal and Vineet Markan as a collaboration platform for designers, the product has pivoted and found an enterprise play. Backed by Blume Ventures and earlier going through the iAccelerator program, Framebench wants to invent a new approach for professionals to share, review and work together on any file across remote locations.

Kayako: Helpdesk and customer support software. Founded by Varun Shoor in 2001, Kayako is a hidden gem that is a global success story built from Jalandhar. Completely bootstrapped, Kayako has a team in Jalandhar, New Delhi and London, and its enterprise software is being used across the world.

Mindtickle: Sales readiness solution helps get a sales team ready. Starting as a learning platform, Mindtickle is a Pune-based company that started in 2011. Since then, it has found a sweet spot with sales team training and is building on its strong gamification foundation.

Unmetric: Social media analytics firm. Based in Chennai and New York, Unmetric raised its $5.5 million series B round in 2013 and currently boasts of having processed more than 150,000,000 pieces of micro content over six social networks for 25,000+ brands from 30+ sectors.

Zoho: Software for various business needs. Founded by Sridhar Vembu, Zoho is a bootstrapped company with revenues estimated at a whopping $100 million. Zoho is one of the few enterprise companies that has been able to keep up with the times and has managed to become a global brand.

FusionCharts: JavaScript charts for web, mobile and apps. Another gem of a company built from Kolkata, Fusion Charts was started more than 15 years ago by Pallav Nadhani who was only 17 back then. The company came is as an alternative for Excel and has managed to create a niche market. FusionCharts is also bootstrapped.

Mobstac: iBeacon proximity marketing and analytics platform. Co-founded by Sharath Potharaju, Mobstac started out as a product that helped brands leverage mobile commerce and this was the model till they raised a $2 million series B round from Accel Partners and Cisco. After this, they found a more targeted area and are focusing on the iBeacon technology.

CloudByte: Storage for shared , multi-application environment. Founded in 2011 by a team of senior technology professionals, Greg Goelz is the CEO of the CloudByte and the company has raised more than $6 million in funding till now. It boasts of clients like Sony, Citrix, netmagic, Apptivo, etc.

Webengage: Onsite customer engagement suite. Founded by Avlesh Singh and Ankit Utreja, Webengage is backed by angels like Rajan Anandan and it later raised an INR 2.5 crore round from Blume Ventures and GTI Capital. Based in Mumbai with a presence in New York, Webengage is used by thousands of enterprise customers.

Wingify: Pioneers of A/B testing, it is now entering the field of testing and optimization. Wingify is a bootstrapped startup that created a space for itself in the A/B testing arena with more than 3700 customers at the moment. Founded by Paras Chopra from New Delhi, Wingify is a storehouse of knowledge around A/B testing.

Ozonetel: Hosted contact center & IVR services for businesses. Based out of Bangalore, co-founded by Chaitanya C., Ozonetel is a bootstrapped venture that expect to hit an ARR (annual run rate) of $5 million this year. Look at Ozonetel's last year in review here.

Exotel: Cloud telephony service provider. Based in Bengaluru, founded by Shivakumar Ganesan, Exotel raised a $500k round in 2012 and since then has been growing on the back of paying customers which include the likes of redBus, Ola and UrbanLadder.

Knowlarity: Cloud telephony and cloud handling solutions. Founded by Ambarish Gupta, Knowlarity is based in New Delhi and has managed to acquire clients the world over. In July 2014, Knowlarity raised a $16 million series B round.

Germin8: Social media analytics platform. Since the launch of its first product- Explic8- in 2012, Germin8 has leveraged its proprietary technology platform and algorithms. Since then, it has grown to acquire customers globally and raised $3 million from Kalaari Capital.

Covacsis: Big data analytics for manufacturing firms. Founded by Tarun Mishra and Abhijeet Mhatre in 2009, Covacsis is a Mumbai-based company that has conceptualized, designed and implemented the Intelligent Plant Framework (IPF) targeting manufacturing industries. The company has raised INR 2.45 crores from Reliance Industries and Cisco.

Seclore: Information security and rights management. Founded by Vishal Gupta, Seclore is a security software company that raised $6 million in 2013 from Helion Venture Partners and Ventureast. The team has grown more than 20 times over the last three years and currently employs more than 100 people.

Ezetap: Making payments easier. Co-founded by Abhijit Bose and backed by AngelPrime, Ezetap is building products to solve the payments issue. The company raised $8 million series B round in February 2014, and with a team of more than 100, Ezetap has more than 20,000 devices being used across India, South East Asia and Africa.

Zapstitch: Syncs data between e-commerce store & accounting software. Founded by Satya Devarakonda, the Bengaluru-based company raised an angel round in early 2014. Zapstitch is currently being used by more than 1200 online stores.

CoCubes: Assessment and campus hiring platform. Co-founded by Harpreet Grover and Vibhore Goyal, CoCubes is used by more than 450 corporate and 2600 colleges. CoCubes is backed by Ojas Venture Partners and other angels.

Wooqer: A platform for increasing team and individual productivity. With 100+ clients and 100k users in total, Wooqer is a bootstrapped company that has a platform designed to drive communication & engagement across large closed groups (companies, forums etc).

KNOLSKAPE: Experiential learning solutions for businesses. Founded by Rajiv Jayaraman in 2008, KNOLSKAPE has grown to build competency in immersive gamification and simulation software focusing on talent transformation. The company is tying up with some high profile HR management companies and also have a significant presence in countries like Singapore, Malaysia and Philippines.

Note: This article was written with an idea to highlight some of the work B2B startups are doing from India and we're sure there are many more companies doing equally good work. The article will be updated once after one week of the publishing date with more names, do drop in a comment with your thoughts.