Changing the way cities look, one wall at a time 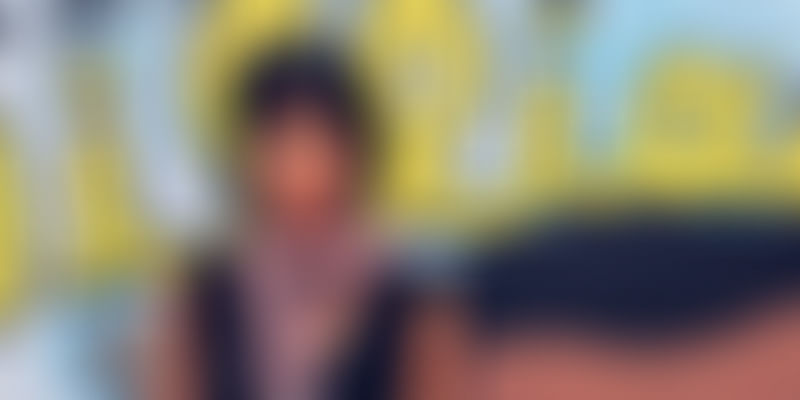 Not too long ago, when all our lives were not governed by social media, a child used textbook covers, walls and sidewalks to express herself. This child grew up to be a passionate teenager who liked to let the world know about her interests. From then to being one of the most celebrated names in Indian Street Art, Jas Charanjiva has come a long way!

How this spunky artist discovered her love for street art is rather intriguing.

“When I was 12 years old, I received my first professional skateboard – by accident literally. My cousin let

me ride down my driveway with his brand new Beau Brown Madrid skateboard. Mid-way I got nervous and fell. Seeing blood, my cousin gave me his board and probably told me not to tell anyone it was his. I missed the first week of Junior High School and I still have a scar to remind me of that day. That skateboard ended up being my ticket into the world of underground art. On the back of every skateboard, there is some sort of art to be found. A skater magazine called Thrasher exposed me to skate art and graffiti,” says Jas who soon found an art genre that allowed her to express herself in public.Getting acquainted with a new city…

Born in the UK, brought up in Toronto and California, Jas shifted to India from New York City to a completely new environment which was

relatively oblivious to Street Art. A casual visit to see a graffiti inspired exhibit led to Jas’s first piece of art on demand. One thing led to another and she was featured on a full page story titled “Artist Promotes Graffiti Art in the City” in a leading daily. Since then, there has been no looking back. Jas’s official launch as a street artist in Bombay happened when The Art Loft asked her to join their festival called The Art Conspiracy which brought together the most talented indie artists, photographers and musicians in and around Bandra. They gave her a 700 square ft room of concrete walls. I spent 10 nights painting those walls”, she says. That was 4 years ago. “Journalists and others haven’t stopped asking for interviews since! I feel if this was NYC, I wouldn’t have received so much attention. I arrived to India at a great time when the interest for street art was beginning to flourish,” she says and feels India has not only been welcoming, but has embraced her art with open arms.The artist and her muse

One of her greatest influnces has been David Bowie. “I live and breathe him. That may have sounded silly but as an artist, it’s not uncommon for us to fall hard for our muses. For me, Bowie awakens that fire in me to be different, to be creative, to be strange, to be conceptual. “Seeing great work by other artists is what keeps her going.

Juggling between art and business

Also an entrepreneur, Jas is the co-owner of Kulture Shop along with her husband Arjun Charanjiva and Kunal Anand who is also the creative director. The idea of building a sustainable eco-system for the best Indian graphic artists around the globe came about when Arjun saw Jas struggling to create her own product line of tees, posters and tote bags with her art printed on them. “This part of the business was just not my forte. He figured if he could find 30 other such artists and provide us everything we needed to get our artwork onto products, then he could build a good business that would benefit the artist and allow them to create work that isn’t client-driven. It’s about the wonderful stuff we create in our personal sketch books. That’s where the magic is ,” explains Jas and adds it’s tough to strike the right balance between business and art.

All shades of fierce…

One of Jas’s most popular designs is ‘Don’t Mess With Me’ commonly referred to as ‘The Pink Lady’ which she created just after the Delhi Rape. This

lady soon became a symbol for women to express their collective anguish; she symbolized both the victim and the protestors who demanded change. “I’ve been told by one person that Rupert Murdoch saw my art print on the wall and said “I like that”. Another person asked for permission to get her tattooed. I said “of course!” ‘The Pink Lady’ was created for Kulture Shop and many people have purchased her on either a tee or an art print. On being asked why almost all her characters appear angry or deep in thought, “It’s my fantasy to single-handedly nab evil-doers and to bring them to justice” she says.Not all that glitters is gold

A lot of young women want to make a career in the creative field which is great but Jas feels some jobs and careers look glamorous, fun or cool, but there’s a lot of hard work that goes into them and hard work requires sacrifices. The right way to go about things she says is to “Learn all you can so you can stand out in this field. Never stop learning.”