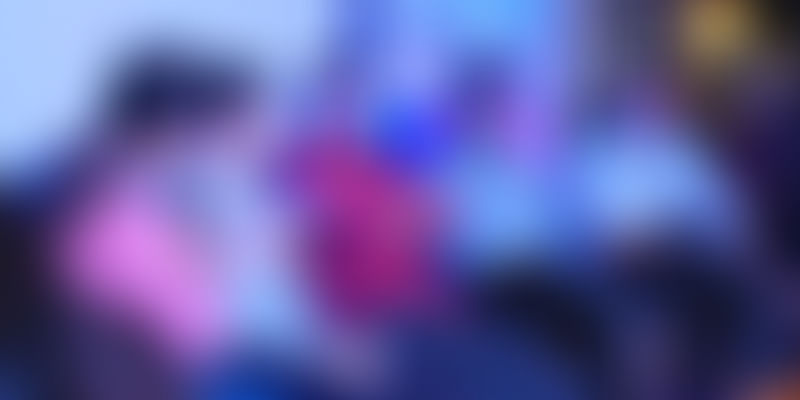 On Thursday, the Bengaluru startup ecosystem was gathered around at California Pizza Kitchen at Koramangala to gain insights on the growing trends of entrepreneurs and funding at the YS Startup Spotlight in association with Nexus Venture Partners and IBM Bluemix. The evening began with hot startups pitching their ideas to the audience. The panel discussion threw up insights on choosing the right people for organisations or talking about the mistakes they've made.

DriveKool, a unique marketplace for driving school, or like Mahesh Gidwani puts, it an online aggregator for driving schools in the country, was one of the startups to pitch in. In DriveKool, one doesn't need to log in, you just need to fill in your details and be a part of the platform. The platform aims to bring in driving literacy and credibility to a rather confused and unorganised market. They are presently tied up with over 100 driving schools and have made over 400 vehicles a part of their platform.

SwitchKit, a DIY home automation startup, founded by BITS Pilani graduates, which aims to bring in energy conservation to this planet (Read More), was the second startup to pitch, while Qyk, a mobile-first platform that brings true and credible service providers to customers (read more), was the third startup.

Wassup, the fourth startup to pitch, is an online laundry and dry cleaning platform. Wassup sends someone to your house to pick up garments to be washed. They inspect, tag clothes accordingly because every fabric has its own washing instruction which we don’t pay attention to usually. (Read More)

IBM Bluemix is an open cloud platform intended to facilitate rapid development of applications in the cloud. During the pitch Neel Iyer, Country Leader, IBM Cloud stated that IBM Bluemix was a startup in an otherwise over 100 year old company. Understanding all the pitches given by the startups, Neel says that Bluemix has a solution for all of them.

For Drivekool, Neel says that with Bluemix, they can integrate Twitter Analytics through which they can get feedback on what the users and consumers say about the service. It will also help them retweet and reach out to more consumers. The other thing Neel recommends Drivekool could use is the Geo-search option, which will help the drivers come to the place where the consumer is located, helping them in their door-to-door service function.

For Qyk, which is looking at a mobile-first platform, Neel says that the app can be integrated with the mobile analytics and segment of Bluemix. He also adds that since Qyk is consumer focused, the push notifications can be effectively used to reach out to a wider audience. He adds that there is an option of using the mobile section of Bluemix across platforms.

For Switch Kit, Neel added that with Bluemix the team could use the cloud database or time series database as a service. The latter provides time stats, and it can be used to time when certain gadgets will be turned on or off.

In the first quarter of this year, close to $1.7 billion were invested in startups marking close to 300 per cent increase from last year. India, in fact, has beaten China in this respect. So, are funds available in the market now?

According to Jishnu, they definitely are. He further stated that the present startup ecosystem is definitely growing with several players in the field. He adds that with the number of people in the market, there are enough choices in the market.

How do entrepreneurs look at hiring when they scale?

While most of the entrepreneurial panelists agreed that hiring is something that entrepreneurs need to be careful of, Umashankar of CloudByte added that for organisations like his they need to be sure that people have solid engineering backgrounds.

Sachit of Stayzilla added that a solid foundation is important, he says,

You need to be very careful when you are looking at hiring the core team because they are the ones who define the culture,

Satya Kaliki of Indix adds that good mentoring is an important aspect as well. The entrepreneurs added that it is essential that the core team comes in from different domains to bring multiple perspectives. Sachit added that while 20 per cent is what the core team forms, they ensure 80 per cent of the value creation. Satya Kaliki adds that as you scale, you need to look at sustainability and motivation levels needs to keep high. "Try finding the smart ones," adds Satya.

What stage should a startup look for funding?

"Each stage is different, and it depends on the organisations," says Jishnu. He further adds that there are three things startups need to make sure before they approach investors.

1. Clarity of thought - Jishnu says that this is more important that building your very first prototype. He adds that you need to be sure what your core is, what your idea is.

Who is your customer, what is the solution you're providing. Everything needs to be clear in the entrepreneurs mind.

2. Sales DNA and respect people - Jishnu says you need to respect the customer and one cannot have a chip on their shoulders. "You cannot believe that you have the best product and you don't need to sell," he adds. He elaborates that sales DNA is how you project yourself and your passion to your customers.

3. Less is more – This, he adds, comes with asking what the key essential things I should be building in the product. Jishnu further stars that entrepreneurs need to focus on what is significant and important for the product.

"The most significant investment done in a startup is by the entrepreneur," says Jishnu. “We are active investors,” adds Jishnu, “but we never run a company. We hold ourselves accountable; are we able to push the entrepreneurs from their comfort zone, are we able to bring a valuable outsider’s perspective, and are we able to break in different lines across all the portfolios. We want to be a bouncing board." According to him, these are some of the questions investors ask themselves.

What is one important thing to create a brand?

"A brand should stand for a character," says Sachit.

He says that brands should define what it stands for, what it means and also what it doesn't stand for and doesn't mean. He adds that telling no is also required in defining the character of your brand.

According to Kalki, the dynamics change for an enterprise company. He further adds that customers are very different in the B2B space as opposed to a B2C space. "To get the first customer, we need to work with them for close to six months," adds Satya.

Brand building for companies like ours, Satya adds, is more about convincing the customer, solving their problem and creating new business opportunities. Adding to this point, Umashankar says, "The quality is under high scrutiny and a win is not that easy."

Satya says that before raising money entrepreneurs are worried about funds, but after raising money, they become more answerable. He further adds that if your customer is not based out of the country you operate in, there are communication problems, and sales DNA problems do come in.

Umashankar added that he learnt a lot from all the mistakes he made. "We have made hiring mistakes, you meet a person for a few hours you think you know the person but that's not true," he adds. These were expensive mistakes, but he says that it taught us that you have to build a strong culture early -- a culture that allows openness in communication and transparency. He further says that HR is just the enabler of the culture, you need to own it.

Sachit said that they made thousands of mistakes. He says, “Without making mistakes you cannot learn and become better.”

What investors look in entrepreneurs is self awareness, stated Jishnu. He further added that, "What we look in the founding team is complementary expertise. They should be able to learn from mistakes, everyone makes mistakes."

The entrepreneurial panel added that while pitching, traction and numbers are important, what is more important is what you have on the inflow indicators; this could either be shaping the market or moving the market. They said that it is about how your product or service interacts with the market.