Solar Power lights up the medical clinics of Sunderbans 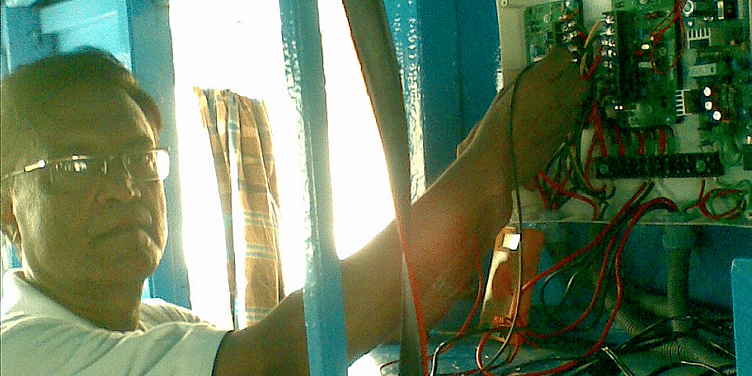 Like his famous namesake, Subhas Bose is trying to bring about a revolution of sorts. Five years back the clinics run by SHIS, an NGO, at different blocks of the Sunderbans of West Bengal were mostly without electricity. The clinics, which include three boat dispensaries, provide medical facilities to the villages of the area. Unavailability of electricity at the clinics led to multiple hazards in running them. Pumping clean water, running necessary appliances during emergency were severely affected in the clinics. Besides, lights, monitor, sterilising machines also required electricity to run efficiently. In most cases the operations at the clinics were run with the limited electricity procured from generators which were inadequate in number. During the night and in the monsoons the patients could not get any medical assistance from these clinics due to unavailability of electricity.

In 2000 the area saw a marked change with 12 of the clinics getting electricity through solar energy as Subhas C Bose, CEO of Green World Corporation, partnered with SHIS, to provide electricity to the clinics with the paltry funds of the NGO. “The Sundarbans is an energy deficient region and most of the areas here are still not connected to the conventional power grid. According to a study, 18 villages coming under the purview of the Sundarbans Development Area are not likely to be electrified through conventional power, at least in the near future. This portrays a grim picture as the relationship between health and energy is compelling. The World Health Organisation (WHO) states that ‘health and energy are interdependent factors which largely determine the progress of rural development…an energy strategy for rural areas will be critical in achieving lasting health improvements. WHO believes solar energy can play an important role in improving health energy infrastructure if integrated with a broader array of end uses’,” says Bose.

“I was at a clinic in Satyadaspur under Patharpriatima block of the Sunderbans. Our job of providing electricity to the dispensary was over and it was time to return. As I stepped out of the clinic an old woman came running and was immediately at my feet mumbling something. Hearing her carefully I found that she was thanking me for the lights in the clinic where her grandchild was delivered a while back. It was the first time in her life that she witnessed such a thing and was overjoyed. Earlier deliveries were done in these clinics in candle or lamp light. It was after they got electricity through solar energy that deliveries started being done under proper electric light. We provided lights for the entire clinics and the boat dispensary. Lights were put up at the pathological centres, surgery sections, patients’ room, doctors’ chambers, visitors’ room, microscope room, X ray and eye testing rooms and also at the engine room of the boat,” informs electrical engineer turned entrepreneur Subhas Bose.

Green World Corporation was founded in the Year 2007 in Kolkata, by Bose with a clear focus on non-conventional energy equipment production, engineering and consultancy. The company supplies solar power systems and LED lighting products such as solar LED street light and home light, solar power plants, solar pumps, solar water heater and LED lights for wide applications in industries and homes. The company in its pursuit of latest technology has focused on LED based lighting system for all applications. The main focus has been to convert existing energy wasting lighting devices to LED base and then convert the LED lighting system to solar base wherever possible. And it’s not just the Sunderbans that they are focusing on. Bose believes that even urban centres need to go the solar way.

“From 2013 we started focusing on our social responsibility keeping in mind the village population. Over the years we have come up with a number of low cost efficient products that can light up the village homes including a series of lights ideal for rural uses and a powerful home lighting system which comprises one fan plus three lights of 6W and Two of 3w. Alternatively a total of 26Watts of LED lights can be put on to this without the Fan. It has a 50Wp Solar Panel and a Mobile Charging unit and can run for 6 to 8 Hrs. We have also partnered with three schools of Kolkata, Delhi Public Ruby Park, Shri Shikshayatan School and La Martiniere, Boys, to set up solar power plants in their campuses,” explains Bose.