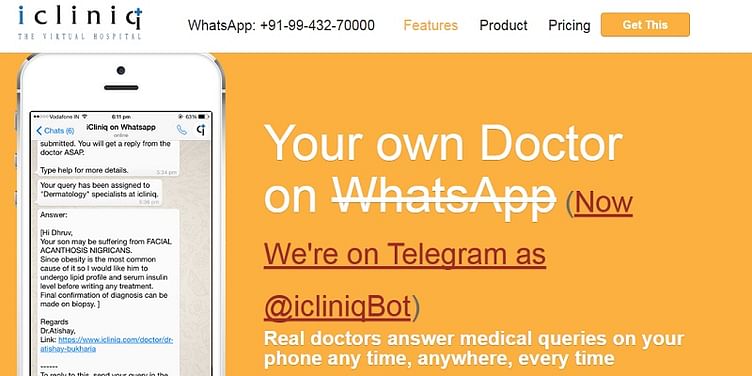 Startups need an audience to test their hypothesis. There cannot be hundreds of apps on a person’s phone. So how does a company increase its chances of reaching out to more and more people? One of the answers: piggybacking on platforms. The likes of Facebook and Twitter are of course available but in a nation like India, instant messaging platform WhatsApp is way bigger to reach out to the mainstream audience. We have written about how WhatsApp is changing the way businesses operate, but the platform itself seems to have different ideas.

Case in point is startup iCliniq, an online doctor consultation platform. Started in 2011 by Dhruv Kumar, the startup had an uphill ride whilst figuring out the right model to go with. At the outset, everyone seemed to like the concept but no one used it when the product was announced. The biggest problem was on boarding doctors.

The team at iCliniq spent more than a year in convincing doctors and educating them on the product. Fixing the supply side, they needed more users on the other side of the pipe. Trying out various methods, by September 2014, iCliniq had offered consultation services to more than 50,000 patients across the world. Next year in June, to accelerate the growth, iCliniq refined an idea on the Rodinhood forum and launched iCliniq on WhatsApp. And the spurt in growth was visible. But soon after, WhatsApp banned the number used by the company.

Why? Dhruv says, “Whatsapp banned us because of the clause in their rulebook, which says, "WhatsApp is likely to ban your accounts if you: - Send messages to people who don’t have your number in their phone book - Start many chats to people who have never written to you before.”

So what was the solution? Dhruv decided to get the iCliniq bot on Telegram, another free and growing instant messenger app.

But Telegram is not as big a platform, and the default messaging app for millions of people remains WhatsApp. For Dhruv and many other entrepreneurs, the grievance is with WhatsApp. “We seriously feel WhatsApp is missing on a tremendous opportunity to help people use their platform to provide incredible services. If Whatsapp opens up their application program interface (API), a lot of channels can come right on WhatsApp. The developers need not focus on UI and UX much as people are already used to WhatsApp API. If the app opens up its APIs, it will be a big boon to us. It would provide Facebook - the company owning the app now - significant revenue as well,” says Dhruv.

WhatsApp has of course seen these business benefits but this is unlikely to change anything. WhatsApp co-founder Jan Koum has clearly stated that WhatsApp is going to remain a standalone, person-to-person messaging app with no intrusions. He wrote in a blog post after the Facebook acquisition, “I want to make sure you understand how deeply I value the principle of private communication. For me, this is very personal. I was born in Ukraine, and grew up in the USSR during the 1980s. One of my strongest memories from that time is a phrase I’d frequently hear when my mother was talking on the phone: ‘This is not a phone conversation; I’ll tell you in person.’ The fact that we couldn’t speak freely without the fear that our communications would be monitored by KGB is in part why we moved to the United States when I was a teenager. Respect for your privacy is coded into our DNA.” Sticking to the vision, WhatsApp might open some APIs and find a workaround but that may happen only gradually.

As for iCliniq, the company has been successful so far with over 1,00,000+ registered users and 800+ doctors from around the world connecting in the common spirit of bettering health on the platform. Regarding this incident, it has a a couple of questions and learning that an entrepreneur can take home: