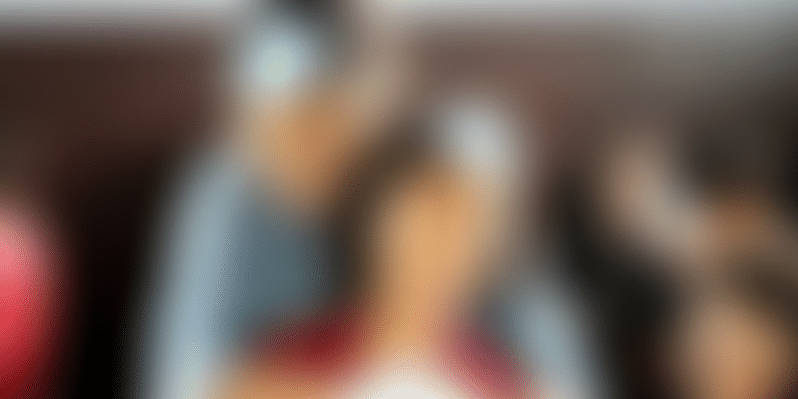 Akhu Chingangbam is a household name in Manipur. Popular for being the front-man of Imphal-based band ‘Imphal Talkies’, Akhu’s unconventional yet powerful, anthem-like song-writing became an instant hit among the youth. Not the kind of guy who writes songs of love, Akhu is vocal about his opinions and has risen to be a rebel hero with his ‘protest songs’. A doctorate in Physics from the prestigious Jamia Milia Islamia University, Delhi, Akhu chose not to pursue a lucrative career, but do what he loves best- sing. However, today we are not talking about Akhu, but about his humanitarian project called ‘A Native Tongue Called Peace’.

Conceived by Akhu, ‘A Native Tongue Called Peace’ is a music project that started in the month of May 2015, under the aegis of Guwahati-based NGO- Foundation for Social Transformation (FST) for children belonging to the hills and valleys of conflict-ridden Manipur.

“It is the communal division among various communities in Manipur that encouraged me to start the project and of course, Guwahati-based organisation Foundation for Social Transformation chose me as their North East Rising fellow. So it is FST who supported me financially for the project.”

With a desire to bring peace and harmony among the communities of Manipur, Akhu and his team comprising Monika Khangembam, Usharanjan, Karnajit Laishram, bring amity and tranquillity through the medium of music, origami – taught by Anku Heirangkongjam, and also therapeutic music sessions. “But we also bring in more people according to our needs,” Akhu explains as he introduces his trusted crew.

Currently being carried out at a children’s home in Imphal, the project houses children from all ethnic backgrounds. Says Akhu, “It has been three months and it is very interesting how they live happily under one roof leaving aside their differences unlike the grown-ups whose minds are so occupied with their caste, creed and religion.”

Having initially visited a couple of homes, looking for the right home to work with the children, the project finally released their first song “All We Need Is Love”. The song features legendary musicians Rudy Wallang (Bass) and Keith Wallang (Traditional Khasi Percussion) and has been partly recorded at the children’s home, Shillong and Shallow River Studio, Imphal.

“So far we have completed two songs,” Akhu updates. “The second song is a special one,” informs team member Monika Khangembam. “The girls have been insisting me to get them Barbie dolls, but it is too expensive and I didn’t want to give them those fake-looking dolls. So we went to Ema Market and got those dolls and gave it to the girls. They were elated! Then they were just having their normal music class when they started jamming with Akhu and that was it- The song came about and we had to get it recorded,” Monika recalls excitedly.The song has been written by Akhu and the children. “They play the guitars themselves and are getting creative; we are very proud of it undoubtedly,” she says satisfied while further informing that the bandhs have delayed its release but the song will nonetheless be released very soon.

“It is fun to work with them. We learnt a lot from the children. But I realise it is very hard to write songs for children,” Akhu expresses. As fun as it may sound, there have been many disturbing moments with the children too. “In our therapeutic music classes, some of them broke down and I realised I needed to do more for these children. You know, the more you know their stories, the more you want to do for them,” Akhu echoes while lamenting that they have very little resources to help out the sixty-two children.

Children often teach the greatest lessons and what life is all about, and the team confessed that they have learnt some of life’s best and crucial lessons from the children. “I have too many memorable moments with them and feel every moment that I have spent with them has made me a more grateful and patient person. Children can teach you unconditional love; how to be spontaneous and live every moment consciously,” Monika says while reminiscing the day she first met them and the children held her hand. “Every experience has been unforgettable!”

Cherishing one of her most unforgettable moments, Monika, recollects one particular incident- “Like every kid, the children are also obsessed with the idea of celebrating a birthday. I remember my own birthday being one of the most awaited and exciting events of the year. So I discussed with the staff at the Children’s Home about it and realised it wasn’t possible to celebrate everyone’s birthday because one- some had already had their birthdays and it wouldn’t be fair to just do some of the upcoming birthdays; second- they are sixty-two of them and we couldn’t afford birthday cakes for all. So I decided why not do a group birthday! I also realised many didn’t even know when they were born. So this was the perfect opportunity to make each one of them feel special without having to worry about leaving out anyone. So I baked two huge pineapple cakes and then we had dozens of candles on it and we all blew the candles together and sang for each other. The children were happy for each other, for their friends, and they were just so happy sharing. That was one of the most satisfying moments that I was fortunate enough to witness.”

The project ends this October and the team has a lot more in store for the children, but Akhu is not spilling the beans. “I can’t reveal it yet. It is supposed to be secret and fun that way,” he grins.

A famous writer once said that a child teaches adults three things: to be happy for no reason, to always be busy with something, and to know how to demand with all his might that which he desires. But the project has taught more than that- to see everybody as being special and to live life fully and peacefully without worrying for tomorrow. The native tongue of life is Peace; and as Akhu wraps up, “Let’s look out for peace and it won’t be that hard.”