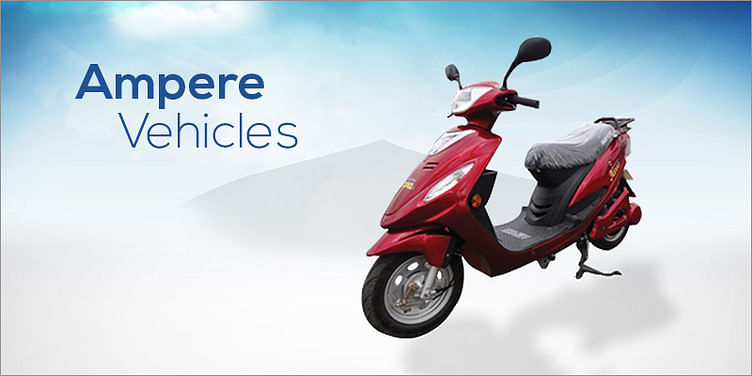 The electric vehicles industry in India is yet to experience an exponential growth given the lack of a proper ecosystem and attention from the government. However, after a downhill period, there is a ray of hope for the industry with Government of India announced its ambition of putting seven million electric and hybrid vehicles every year on the road by 2020.

Though the industry is still struggling to find an independent identity for itself, a couple of players have embarked into this space and vouched for a positive future ahead. Ampere Electric is one of the few names which have carved a niche for themselves as innovative technology creators in the nascent Indian electric vehicle industry. The company’s products range includes e-cycles, e-scooters, e-trolleys (for carrying load) and special-purpose vehicles for waste management and to cater to differently abled persons.

The idea for the company hit Hemalatha Annamalai when she attended a conference with her husband in Japan. One of the speakers there made a very strong statement, noting: “gone is the era of the ICE (internal combustion engine)”, and spoke at length on how electric vehicles will create ripples in future.

Hemalatha founded Ampere Electric in 2007. Coming from a non-manufacturing background, doing this was one of the biggest challenges for her.

Our team had the passion which fuelled our quest for learning the tricks of the trade. There were many errors on the way, but, every mistake cemented our foundation, and today we are because of the challenges we faced. Other challenges included talent acquisition and team building.

Hemalatha turned entrepreneur at the age of 27. Her first few ventures were in professional services, technology training, tours and ticketing and an international consultancy for talent acquisition. As a serial entrepreneur, Hemalatha spent the last 15 years creating and driving entrepreneurial ventures. She says that since each day in entrepreneurship is different with its own set of challenges and victories, the experience has been rewarding.

Hemalatha holds an MBA from Royal Melbourne Institute of Technology, Australia, and a bachelor's degree in computer science and engineering from Government College of Technology, Coimbatore.

Recently, Ratan Tata has invested an undisclosed amount in this Coimbatore-based electric vehicle startup. Ampere will be predominantly utilising these investments towards its indigenisation efforts. The startup aimed to indigenise the four key components needed to make an electric vehicle, namely, battery, motor, charger and controller.

We have already made our 36V and 48V chargers suitable for e-cycles and e-scooters. This will help in creating more job opportunities as well as establishing Ampere as a reliable alternative supplier to Indian businesses in the electric vehicle domain.

In the B2C space, the primary products are electric cycles and electric two wheelers. In the B2B segment, the startup sells e-scooters meant for courier delivery, door delivery products.

Research and development has been the backbone of Ampere since inception, because the startup claimed to be the first company in India to make their own chargers (36V and 48V) for e-vehicles.

In India, charger is one of the biggest problems, as the imported chargers are not suited to the Indian road condition and erratic power supply," Hemalatha says.

Today, all the vehicles of Ampere Electric are run on motors and controllers designed by the R&D team. The team has also created an intelligent battery chip which ensures that batteries do not bulge and helps increase the usage life of batteries.

Hemalatha says the company has invested and reinvested a major portion of the income in R&D efforts, especially to develop indigenous products. Twenty per cent of their workforce works in the dedicated R&D unit.

We procure most of our material from local markets spread across India. But a few components like the lead in the battery and magnets for motors are imported from China as these are currently not mined in India. We are finding ways in which this dependence can be reduced. Today, we have a capacity to produce around 30,000 vehicles every year.

With the government motivating the industry to indigenise and make products that suit the specific market conditions, the business opportunities are humongous.

In our own little way, we have contributed towards the future of this industry by creating a 100 per cent locally manufactured vehicle.

Hemalatha highlights few other things that can help the cause of the industry: quick implementation of common tax structures (CST/VAT/LBT for electric vehicles) across all States, assistance in improving the charging infrastructure, better road conditions along with dedicated cycle lanes where possible, incentives in the form of income tax benefits to families that use only electric vehicles and tax SOPs to attract more players to the field.

Ampere Electric has been consciously involved in R&D through frugal engineering to bring out products and processes that can ensure social transformation, especially in rural markets. The startup claimed to be the first company to design electric vehicles for the differently abled in Tamil Nadu and Kerala.

Ampere has designed a product called Trisul targeting textile and spinning mill workers. These workers are predominantly rural women in the age group of 20-40 who have to walk between 12-15 kilometres each day inside the factory shop floor to manage the spindle.

Women’s empowerment has been a strong driving force for Ampere since inception. Even inside our shop floor, we have engaged 30 per cent women as part of our workforce. We will be doubling that percentage soon.

Ampere will play a very significant role in helping the government achieve its targets. Ampere aims to produce and deliver between 15-20 per cent of the 7 million vehicles. We encourage every household to use e-bikes for short-range commute and contribute to the government’s Make in India initiative and to achieve environmental sustainability.

Ampere Electric was selling around 200 vehicles per month. When government has given interim subsidy for e-scooters from 2010-12, the number went up to 687.

As a part of its growth strategy, Ampere aims to increase distribution print from the current four States to 10 within the next three years. The company also plans to launch two new models before the end of this calendar year. Ampere will build an e-cycle factory completely operated by women in the next 3 years.

Instead of just talking about ‘Make in India’, our government must identify few industries particularly in the MSME manufacturing cluster, identify select companies and show how it can be effectively executed. This is not easy but where there is a will, there is a way.