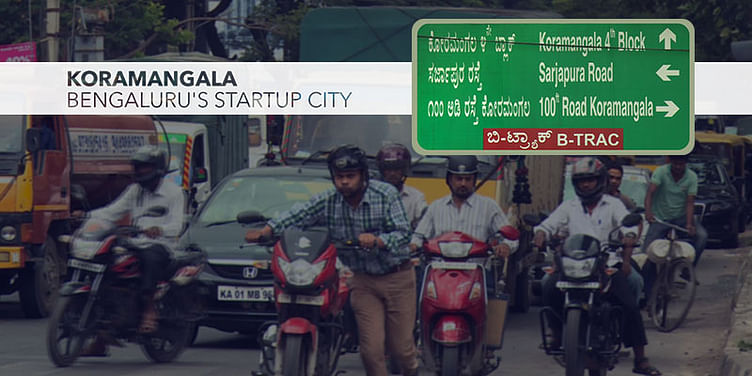 In the recent ‘Global Startup Ecosystem Ranking’ by San Francisco-based Compass, Bengaluru is ranked at number 15, up by four places since 2012. According to the report, “The city scores big time on exit valuations.” Bengaluru “witnessed five times more exit value last year than it did in 2012.” In fact, of the $3.5 billion funding raised by startups in India from 380 (disclosed) investments in the first half of 2015, majority went to startups in Bengaluru and Delhi NCR, according to a YourStory research report.

With a new startup mushrooming almost on a daily basis from 2bhks, Bengaluru is proving to be the world’s second fastest growing startup ecosystem. However, it is particularly the southeast parts of the city like Koramangala, HSR Layout and Indiranagar which are becoming a city within a city – the startup city.

If an old-time resident from the traditional ‘pete’ (areas developed by the founder of Bengaluru, Kempe Gowda) were to visit Koramangala, it would be no surprise if they thought they had travelled to another city. These areas truly showcase the diverse migrant population of young Indians, a majority of whom have come to the city to either start up or work in one. As a startup enthusiast colleague is fond of saying, Koramangala is the 'test lab' of startups across the country. Even if entrepreneurs are building products for another region, this is where they first test it out.

Non-existent in the original plan of Kempe Gowda, Koramangala was nothing more than a mosquito-infested swamp where only the brave dared to venture. But in just a span of 10-15 years, it has ‘developed’ into a big, bustling neighbourhood which is so self-contained that the young working professionals can be pardoned for not venturing out beyond its limits into the greater city.

In our video story, we explore what makes this neighbourhood so conducive to building tech businesses? And why Koramangala is Bengaluru’s startup city?