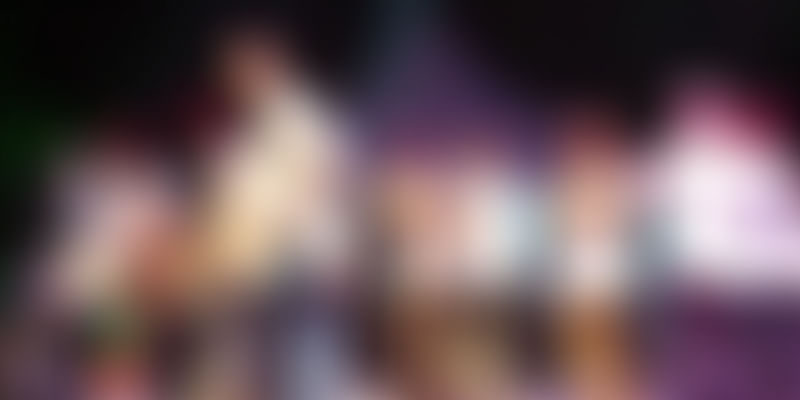 PhotoSparks is a weekly feature from YourStory, with photographs that celebrate the spirit of creativity and innovation. In this showcase, we feature some of the creative performers and activist musicians at the 18th annual Rainforest World Music Festival in Malaysia!

It is hard enough to master an instrument and perform centrestage – forming a band and building a successful career out of it is even harder, especially when you are also preserving your local culture, fighting for cultural freedom, overcoming social prejudices and blending other music styles with yours. That is exactly what many inspiring musicians showed in Kuching, Malaysia, at the Rainforest World Music Festival (RWMF).

Join us in Part I of this photo showcase from RWMF celebrating the power of creative freedom and cultural diversity, with bands from Maldives, Georgia, Gambia, Congo, Scotland, Tunisia, Trinidad, Indonesia and Malaysia!

Continental fusion: The culture of the Maldives is a fascinating mix of Indian, Sri Lankan, African and Arabic influences. The group Harubee consists of 16 drummers, singers and dancers performing boduberu music, which evolved from the 11th century onwards. The songs are about everyday life, often heavy with satire. The drumming and dancing are frenetic, and crescendo into trance-like climaxes.

Gender, genre no bar: Meet Sona Jobarteh, the first female kora virtuoso to come from a West African minstrel or griot family. Over the past seven centuries, the 21-string kora harp has usually been played only by men, in Gambia, Senegal, Mali, Guinea and Guinea-Bissau. Sona was tutored by her father Sanjally Jobarteh. She studied Western classical music as well, and also performs with musicians on electric guitar and bass. Her vocals were featured in the Hollywood blockbuster movie ‘Mandela: Long Walk to Freedom.’ Gender and genre are no obstacle for a determined female artiste, as Sona brilliantly shows.

Complexity from simplicity: The group Ndima from Congo, Brazzaville in Central Africa showcases music from the pygmy community, which includes polyphonic singing, yodelling, percussion and harps. Though the region has had its share of communal conflicts, Ndima reaches out in a spirit of collaboration, peace and mutual respect. One of the most amazing string instruments they played at RWMF was the mbela, made from a curved stick and played with two small sticks – the voice lends it the tone of a morseng or Jewish harp.

Mists of time: The group Mah Meri is from the Orang Asli, the indigenous people from peninsular Malaysia. Shamans and spirits are commonly portrayed through fearsome masks, along with female dancers in mengkuang skirts. The ancient rites and folklore are an integral part of the culture of Carey Island. In an era of globalisation, Mah Meri is adding its own unique ethnic voice to the planetary mix.

Freedom and harmony: Georgian folk ensemble Alaverdi features four vocalists who specialise in polyphonic harmonies, including Nugzar Kavtaradze who plays traditional flute – at one time even playing two flutes together. But all was not well during the Soviet era, when they were shamed and ridiculed for playing their traditional music. Fortunately, some of the musicians created music schools to preserve this heritage. The members of Alaverdi also play ethno-jazz in the group Iriao at festivals (see my earlier photo essay on the Java Jazz Festival).

Invent, re-invent: Shooglenifty is an award-winning folk and fusion band from Scotland, and now celebrate their 25th anniversary. However, the band’s music has never been frozen in time – the group keeps re-inventing itself with new formats and collaboration. For the first time, the band now features a vocalist. The band believes in preserving traditional music and cultural freedom, and has spoken out against fascist groups who have recently tried to claim folk music as a way of excluding other influences. The band’s stance shows through in its music and even the bassist Quee MacArthur’s T-shirt.

Street food, street music: Culture Shot’s Ang Eng Bok from Penang in Malaysia plays the Chinese string instrument lang ting tang, along with co-founder M. Sivasilan on the mridangam-like gendang. Their repertoire includes old songs in the Hokkien Chinese dialect, in a region where Mandarin is on the rise. The band preserves the ‘street music’ from the state of Penang, which is also famous for its street food.

Acoustic and electronic: Bargou 08 preserves the almost-forgotten music from the north west of Tunisia, a region isolated from the rest of the country by mountains near the Algerian border. Singer Nidhal Yahyaoui plays the wtar, a unique string instrument from the region, along with traditional percussion and electronic synthesizer. In the years since the Arab Spring, Tunisia is opening up to its own cultural diversity.

‘Body percussion:’ Komunitas Badan Gila (Crazy Body Community), more commonly known as Kobagi, was formed in 2008 in the village of Sebatu, Bali, Indonesia. They also play the kecak style of music, hence the band’s name: Kobagi Kecak. Its members include farmers, labourers, entrepreneurs, teachers and civil servants. Their performance style is called Angga Suara Murti. Kobagi uses the performers’ own bodies as their primary instruments – with shoulders, chests, thighs, necks and even bellies used as percussive surfaces between clapping and finger-snapping!

Passion and preservation: One of the most energetic bands at RWMF was the Basque folk group Korrontzi from Spain, with a blend of Galician, Sicilian and Sardinian melodies and dances. However, the happy sound also has a tragic past. “Our traditional trikitixa accordion was not allowed to be played for a hundred years, the Church thought it produced the wind of Hell, but we want to protect and preserve it,” said band leader Agus Barandiaran.

Freedom and wit: Kobo Town from Trinidad & Tobago showed how wit and humour were used to convey political messages. Calypso musicians often came under pressure and even censorship from their Caribbean governments in the last century for criticising politicians and policies. But metaphor and humour were used by the artistes to carry on their satire and commentary, said singer-composer Drew Gonsalves. One can overcome self-righteousness with humour, funny stories and witty lines.

Beyond the senses: Sayu Ateng means ‘welcome’ in the language of the Orang Ulu people of Borneo. The band has created a unique blend of traditional instruments with contemporary ones, and performs songs based on the nature, landscapes and folk stories of Sarawak. Their guitarist Mohamad Kedari Abu Bakar is blind, but that did not constrain him during his performances on the stage and in the workshops, where he wowed the audience by playing the guitar on his head, with his teeth and even flipping it over onto his left side!