[Photo Sparks] Passion and policy – startups and ministers at InnoFest 2015! 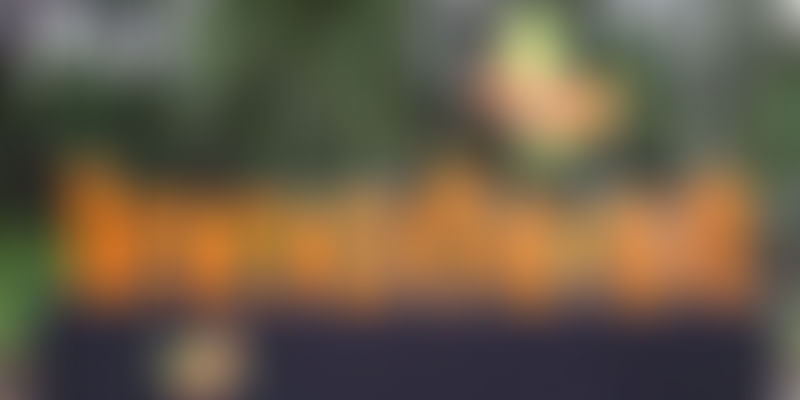 PhotoSparks is a weekly feature from YourStory, with photographs that celebrate the spirit of creativity and innovation. In this showcase, we feature some of the innovators at the InnoFest 2015 in Bangalore, along with the ministers who spoke at the festival!

A festival of innovation: Held on August 22 on the campus of the Indian Institute of Science in Bangalore, InnoFest was truly a celebration of innovation. Organised by iSpirt, the event featured a young innovators zone, power panels, and interactive ‘townhall’ sessions with the founders of high-profile startups such as Practo, InMobi, RedBus, Portea Medical, FreeCharge and PayTM. There are plans to take this festival to other Indian cities as well.

Beyond the eye: BITS Pilani Goa Campus students have built a Virtual Reality headset called Tesseract under the company name Absentia VR. The prototype headset works along with content created or stored on a laptop; more recent ones work with mobile phones as well.

Take a moon shot: Meet Team Indus, who won the $1 million Google Lunar XPrize this year for their progress in working towards building a robot that can safely land on Moon, travel 500 meters, and send Mooncasts.

Frugal Innovation 1: The Srishti School of Art, Design and Technology has launched a centre for frugal innovations, which has come up with prototypes such as a washing-machine powered by children playing on a see-saw.

Frugal Innovation 2: Students of the Srishti school have also developed grassroots innovation designs (GRID) for street workers – such as this bicycle-powered street cleaner with mounted brooms.

Hackteria: Welcome to the Hackteria (hackers’ cafeteria – or bacteria for hackers?), where learners can experiment with electronic tools and components to study biology using open source methods.

Look within: Veinus is a medical product developed by InfraEyes to help doctors and nurses quickly and accurately locate veins below the skin. The use of infra-red scanning helps detect the right points to inject drips and probes, and avoids the pain of unnecessary skin piercing to locate the vein.

An extra pair: Looksphere has developed a small slender viewer (Google cardboard) which can be used for 3D images of drawings. Target audiences include gamers, designers, architects and urban planners.

Enter the drones: A number of organisations are teaming up to develop drones and examine use case scenarios, including IISc, MIT Media Lab and Infosys. The Netra drone has already been used in traffic management, disaster relief and defence.

Whiz kid: Eleven-year old Nihar Thakker has developed a range of gizmos: a cap which actually uses solar energy to cool you off, a speaker amplifier using a soda can, and a robot which can manipulate Rubik’s cube!

Smart glove: R.V. College of Engineering student Basha has developed an electronic glove for sign language and speech conversion. It uses Bluethooth and an accelerometer to map and analyse communication patterns.

Sound everywhere: Plugzee, developed by Nagarjun Kinare, is a device that turns any audio speaker system into a Bluetooth speaker. The device plugs into the 3.5 mm audio jack of the audio speaker and lets you stream music wirelessly by Bluetooth pairing with a smartphone.

Democratic manufacturing: Global 3D labs, a unit of Additive Manufacturing, has developed a range of 3D printers. The target audience is engineers, researchers, manufacturers and students.

Virtual touch: vSkin is a wearable glove that creates a sense of touch on the users’ fingers in a virtual setting. Using haptic sensors, the user can almost feel that a piano is being played or the gun trigger is being pulled.

I, Robot: Land surveys by architects and urban planners can be speeded by the SurveyBot – an autonomous land surveying unit (ALSU). Once configured properly, it can carry out surveys at a much more accelerated pace and accurate rate than the manual method.

The real thing: Koramangala-based Crossworks has developed the HoloBox, a 3D projection platform that can display 3D animated objects floating in the air with stunning graphics and visual effects. It can be used by animators, designers and product developers.

Rural IoT: KisanRaja, developed by Vinfinet Technologies, is a range of IoT-powered solutions for managing motors in rural areas. These could be used by farmers to turn water pumps on and off, receive voice alerts about power cuts in remote areas, and detect tampering or theft of machinery.

Eye on the pulse: The SwissNex pavilion featured the company SmartCardia, which has developed a range of wearable sensors. They can detect, monitor and report on indicators like heartbeat. The reports can then be sent directly to doctors and medical institutes.

What’s a festival without music? – Bangalore band Imaginary News also played at InnoFest, adding another creative element to the mix. Their releases include the tracks ‘Time’s On Your Side’ and ‘Lucky Summer Day.’

Power shift: A live CNBC interview hosted at the festival featured Jayant Sinha, Minister of State for Finance, and Vijay Shekhar Sharma, CEO of Paytm. Government jobs were popular after independence, then big company jobs in the 1980s, and now startup jobs, observed Sharma. Whether or not new payment startups win against incumbent banks, the citizens of India will ultimately win, he said.

Dream, do: The new wave of innovation in the country will solve the problems not just of India but of five-six billion other people in the world, said Minister Jayant Sinha, who was earlier with McKinsey and the Omidyar Network, and is a graduate of IIT Delhi and Harvard. “I dream of a healthy India and a clean India,” he said.

What’s a good Indian event without a touch of Bollywood? - Babul Supriyo is Minister of State for Urban Development, and for Housing and Urban Poverty Alleviation. He has also been a playback singer for Hindi, Bengali and Oriya films! The ‘Minister from Bollywood,’ dressed more like an artiste than a minister, closed the event in fine style with four of his hit songs. “This government will show you things you have never seen before,” he joked, to a standing ovation.