Pickingo raises $1.3 million led by Orios Venture Partners along with other angel investors 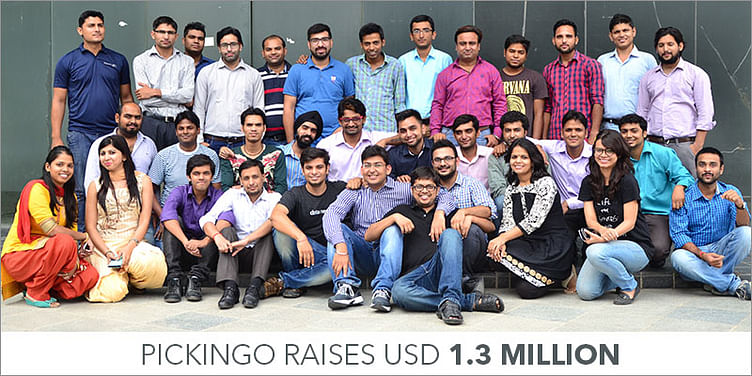 Gurgaon-based Pickingo, a B2B on-demand hyperlocal logistics startup, has raised $1.3 million led by Rehan Yar Khan of Orios Venture Partners along with participation from Zishaan Hayath, both early investors in Ola Cabs among other ventures. The venture which caters to restaurants, merchants and e-commerce companies will utilize the fund in building technology, geographical expansion, and customer acquisition. The company had raised a seed funding in March this year.

"We are a technology-driven platform. Automating the platform and building a robust online system will be our priority. In hyper-local delivery segment, we intend to expand to more than 20 cities by the end of the year. Logistics is a very exciting space right now. Huge supply and demand are present in different planes of cost, time, and geography, we just need to match them using technology to unlock a large number of transactions," says Rahul Gill, CEO and Co-founder, Pickingo.

Launched in December 2014 by a team of IIT-IIM graduates, Pickingo started with reverse-pickups for e-commerce players such as Jabong, Snapdeal, Shopclues, and PayTM across six cities. It recently entered the on-demand hyperlocal delivery segment and has witnessed significant merchant adoption. More than 300 restaurants, groceries, and pharmacies have signed up for their on-demand delivery service, including some large hyperlocal startups like Grofers. Now, the startup aims to disrupt the way goods move within a city from the merchant to the end consumer.

Talking about the investment, Rehan Yar Khan, Founder & Partner at Orios Venture Partners, says, "Just like in other verticals such as food, grocery, and laundry etc., hyperlocal logistics will be disrupted through on-demand, players using an uberized model. We have already seen this model become a huge success in China with billion dollar players emerging within a year of starting up; and also in the US. Players like Pickingo will enable reliable and efficient movement of goods from the merchant to the consumer, vice versa and eventually even between consumers."

Started as a bootstrapped platform with an initial investment of around Rs 30 lakhs, the venture seems to come a long way.

In reverse pick up segment, the venture charges from e-commerce platforms based on the weight of delivery items. In on-demand delivery segment, the charge is based on distance from merchants.

In the past four months, Pickingo has scaled up to more than 100 on-roll employees. They currently service more than 3000 deliveries per day with a fleet 300 field executives.

Recently, Pickingo was selected among three companies to be featured in the Google-Deloitte report on impact of cloud and mobile technologies on SMBs in India.

Based purely on this idea, Roadrunnr, a B2B online platform and service provider for hyperlocal logistics, is a direct competitor. This Bengaluru-based venture caters to merchants, restaurants and e-commerce companies. Last month, it raised $11M funding from Sequoia Capital, Nexus Venture Partners, and Blume Ventures.

Besides, there are other platforms such as Foodpanda, Swiggy, Meals on Wheels, and others in the hyperlocal delivery market. However, these players are catering to one specific segment, especially food delivery where they pose a big challenge for Pickingo.

A large amount of funding raised by many players tells about investors’ confidence as they are ready to bet big on on-demand hyperlocal delivery sector.