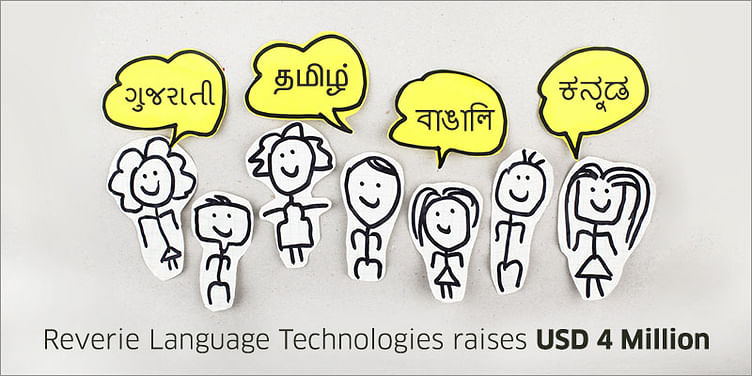 Reverie Technologies, a Bengaluru-based company that offers local language technology solutions, has raised USD 4 million in its Series A funding from Aspada and Qualcomm Ventures.

“We are excited to have Aspada Investment Company and Qualcomm Ventures as our investors. Aspada has been investing in exceptional innovations that solve hard problems and Qualcomm Ventures were the first to believe in Reverie’s story, ever since we won the prestigious Qualcomm QPrize™ in 2011,” says Arvind Pani, Co-founder and CEO of Reverie.

“Easy local language support for digital services and content in India and other markets is fundamental for the continued growth of the market and in the digital inclusion of hundreds of millions of non-English users. Through our language localization platform Reverie, we aim to create a content-rich Internet that is accessible to over five billion users of every local language, irrespective of the devices they use,” says Arvind.

The venture will utilize the funding in its expansion plans, technology development, customer growth, and other areas.

The venture is planning to expand in the Middle East and South East Asia. A part of the fund will be pumped in the continuous innovation in cloud-based language-as-a-service platform. It plans to add more customers in online commerce, social messaging applications, marketplaces, banking, and financial services, digital India government initiatives and enterprise software.

According to the company’s statement, the investment shall also boost the its initiative of democratizing the creation of multilingual apps as it looks to extend its language platform to over 10,000 local language app developers over the next 12 to 18 months.

“Today, over 150 million Indian mobile internet users, which are more than half of the total user base, are unable to access the tremendous innovations on the mobile web. The only way to address this problem is by building the full-stack of user experience in local languages spanning translation, input methods and in-app search. We believe Reverie’s language platform will enable every app developer to expand their reach by an order of magnitude, while at the same time, boosting stickiness, engagement, and conversion across the board,” said Sahil Kini, Vice President of Aspada.

Sahil will be joining Reverie’s board as it looks to increase its presence in the consumer Internet, financial services, government, and enterprise software verticals after this round of financing.