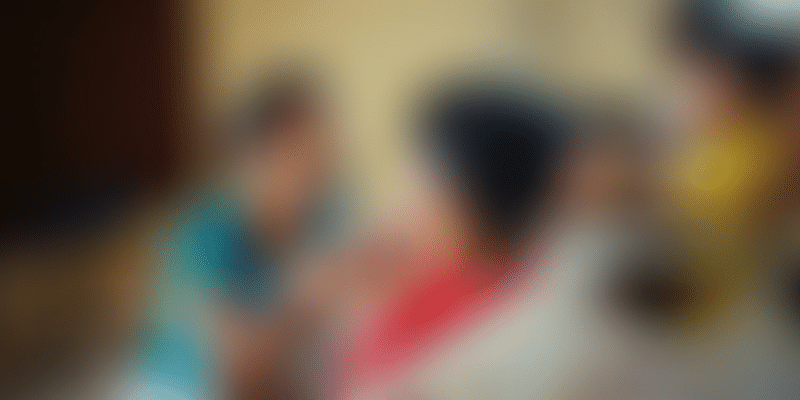 Sampoorna is a part of the Kilikili Trust, a project founded by Kavitha, Ganesh, and a few of their friends. Kilikili – which in Kannada means the trilling laughter of a child – looks to make public parks in Bengaluru equally accessible to all kids. They have worked with the Corporation in Bengaluru and other cities where public places are accessible to kids with disability.

Kavita and Ganesh’s son, Ananth was born autistic. A child who didn’t speak till he was three years of age, and showed no interest in toys and blocks, responded to music. He began with humming the parts he liked and then later, he started singing when he was able to speak. He started identifying similar sounding songs to the extent of identifying songs that came from the same raga. Ananth, now 13, is pursuing Carnatic music in Chennai along with his studies.

When Ananth showed an inclination to music, and started making it a part of his identity, Kavitha and Ganesh decided to help other children like Ananth. Sampoorna was started in January 2013, under the Kilikili Trust, to help autistic children. Sampoorna employs music therapy as a way of reaching out to children with disability. Sampoorna has a music therapist, a musician, and a vocalist, who help the children out. The children, who are between the ages of 4 to 14, are thrilled to attend these sessions after school.

The tipping point was when India SAP labs was organizing the ‘India Inclusion Summit’ in 2012 with the aim of raising money and to find an initiative which will sustain. Kavita adds, “They raised money and told us that they would support the initial setup cost of Sampoorna, which enabled us to launch.”

The programme at Sampoorna is such that the goals it has laid down are the actual developmental goals for autistic children. Various studies have shown that therapy through music has helped individuals with autism. Those with autism usually find it difficult to communicate with those around them or be able to relate to them. A number of other benefits have been attributed to music therapy for helping those with autism. They have been seen responding to verbal communication, and have shown a noticeable decrease in anxiety levels.Building Connectedness

Typically, parents have noticed that the kids who come to the centre respond positively to music. Kavitha says, “Almost nobody knows how to take that forward. So they enrol because they see something related to music happening in the class. When the child enrols, we find that the child has been exposed to very little music.” The initial goal is to expose the child to as many genres of music as possible and understand what the child enjoys.

Once the team at Sampoorna understands what the child gravitates towards, they then work on the next goal of communication. Getting an autistic child to communicate is most important. “The motivation in music is so strong, that they begin to communicate in ways which they may not do in any other therapy.” She says that even non- verbal children find ways to express what they love. “Let’s say the child wants the rhyme ‘Twinkle Twinkle Little Star’, the child would do an action from the time the therapist had initially presented the song to the child. We look at all form of communication – verbal, non-verbal, gaze, pointing, constant inclination to a song or an instrument which gives a clear indication from the child. ” The children who start getting verbal are helped by the team to make the child request with words, gradually helping the child graduate to phrases and then to complete sentences.

Most kids with autism have behavioural patterns that are often frowned upon in social circles. “Let’s say a child is used to banging something on his palm. We work on how that behaviour can be channelized to beating an instrument with mallet.” Kavita says that this is an area where they have not seen complete success but they’re constantly thinking of ways that can work with a better success rate.

The child gets two sessions in a week, one is individual and the other is a group session with peers. Making the child understand the importance of taking turns and social cues like clapping when a song gets over. Everything is in the context of music. Many kids don’t know how to be an audience so the team uses music to make the child understand – when it is the child’s turn to sing and when to listen.

Building on the musicality itself

Once the child settles into the programme, which usually takes about a year, the team has complete understanding of the child’s interests and grasp as well. The team then focusses on helping the child learn the instrument itself in an instruction based class. If Sampoorna does not have the personnel who can teach the instrument, the child is referred to a place that can teach, some of them being classes with regular children. Sampoorna now boasts of children who have gone out to learn the keyboard, vocals, drums, etc.

Over the last 2.5 years they have been able to reach to about 50-60 children and at any given point of time, they have 10-14 children enrolled at the centre.

Kavita points out that the main challenge is not being able to find enough people who have the expertise in music as therapy. Parental expectation is another challenge. She adds, “Parents expect that if a child is attending a music programme, he/she should learn an instrument or sing. For us, that is an ultimate goal, but for some children, it is not even a goal. It can lead to parents pulling out the child from the programme or not waiting long enough to see behavioural changes in their child.” The third area has been funding. With the initial grant from SAP helping Sampoorna in the first 2 years, it is now not enough to cover costs. Kavita says that they’re finding it difficult to sustain. Kilikili is raising funds to offer scholarships to children who cannot afford the fees at Sampoorna. The funds will also be used to repair or replace the existing musical instruments for the children. She concludes with, “We want to deepen the impact and reach more parents and children.”