A ‘special’ entrepreneur, Santhi K connects with children like no one else 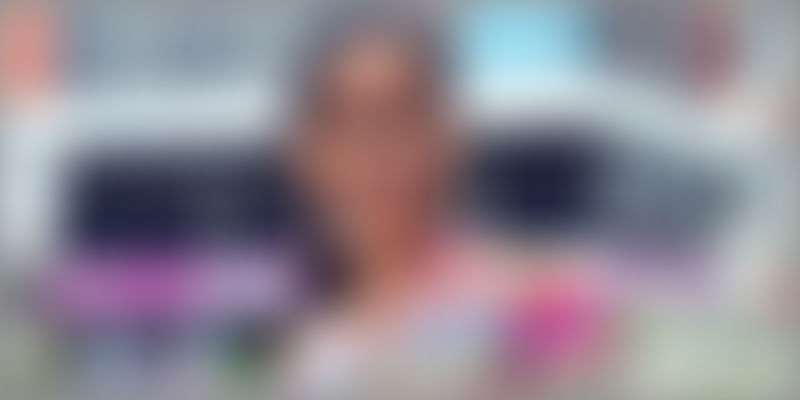 On days she could not go to their school, they would call her up from the one rupee public booth inside their school premises and make all sorts of sounds – an appeal to come and be with them.

“I could not ignore their calls, would somehow take some time out to go over and spend time with them. Though they were sounds which mostly had no meaning, it was a call straight from their hearts and so very difficult to ignore,” says Santhi K, Founder of EDventure Academy, a centre which works closely in assisting special children in a bid to make them independent.

Santhi recalls how her very first association with special children helped her develop a bond with them. It was a school run by the Shanti Ashram for special children in their premises at Visakhapatnam. An ashram which worked closely with hearing and speech impaired children, Santhi used to volunteer there to help kids with their academics over weekends while herself pursuing her graduation and post-graduation in Human Genetics from that city.

All they need is love and people who can understand them and are willing to be with them. I clearly remember how the children were so disinterested in the fruit baskets and food that used to come for them from various NGO’s in the vicinity. They used to stand for us by the gate and were so happy to see us each time we went there,

says Santhi, who got her friends too to join her in helping out these children with special needs.

For someone who didn’t know what being a special educator meant, Santhi indeed has come a long way. Born and brought up in Vijaywada, she was a student of the Kendriya Vidyalaya school and was brought up with high moral values. Also part of the Scouts and Guides team, she developed an interest for the services right from the beginning though it got subdued for a while when academics took precedence in the years that followed.

Santhi taught children with special needs, academics as well as social skills – the way to go about keeping rooms neat and tidy alongside taking good care of their hygiene.

Her practical experience over a period of time stood her in good stead and Santhi was soon called upon to be a remedial teacher for a Hyderabad kid, who had severe behavioral problems. Tall and well built, he had shoved off many a teacher and the need was acute as he was all set to write his Board Examinations and his parents and the hostel where he was put up had no clue how to go about it.

“The day he saw me, he was adamant to chase me off too. I also didn’t know initially if I could be of any help to him but my resolve to bail him out of the situation actually helped,” says Santhi who was subject to a lot of bullying by the 16-year-old. He cut her hair, tore her clothes, did everything possible to get her out of his way but she stood her ground. Also the fact that he didn’t have much time before the Board examinations meant that Santhi had to break the ice with him sooner.

“I sat down and explained to him over so many sessions that his co-operation alone could help us and I saw that he understood slowly. I assured him that I would take him out of the ‘jail’, a term which he used to refer to the hostel where he was in and the changes I saw in him over time were amazing,” says Santhi. Yes, the child did clear his Board Examinations in the very first attempt.

Santhi then enrolled herself for a course in special education with specialization in mental retardation. She knew that Genetics was not her cup of tea though she found a great interest in the paper on Disabilities, which was part of their curriculum.

Soon Santhi got associated with a school to help children with learning disabilities. But she could not sustain her stint there as she had a conflict of interest with the school’s management. She learnt that the school was charging enormous amounts from parents in her name, something which did not go down well with her. Also they were overloading her with work without providing adequate skilled manpower to lend a helping hand to her. She shifted base to Bengaluru to help another Down’s Syndrome child.

That is precisely when she thought of putting together a set-up which was transparent and looked only into the interest of special children. Thus was born EDventure Academy in Bengaluru, a centre which started operating out of a one BHK apartment in HSR Layout. Apart from helping children get back to mainstream schools, Santhi also works with teenagers and young adults to train them in taking care of themselves.

From one child in 2011, EDventure Academy has grown to a two-storied building centre now imparting training to 18 such special children, each in their area of requirement.

A dream which inspires Santhi each day

Santhi believes that empowering not just special children but even their parents is the way ahead for an inclusive society. She conducts workshops for parents and for regular school teachers as well, educates them on the need to make simple modifications at each step in the immediate surroundings to accommodate children with special needs.

My dream is to leave behind an inclusive world, a place where no one sees persons with disabilities, both physical and mental, as different but as one,

signs off this special educator.