Land, water and sky – Sneha Sharma has been there done that 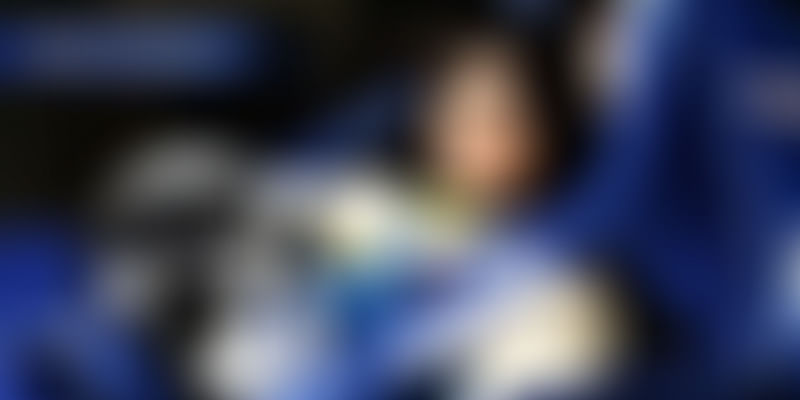 The racing track is alive with the squeal of tires, the car stops, the rider takes off the helmet and the mop of curly hair reveals a woman.

Women can’t drive is a rant we get to hear all the time. Sneha Sharma chooses to ignore it.

A pilot by profession, Sneha is eyeing the formula one circuit one day. Talking about being the only girl among all the men on the racing track she says,

In the initial days when I qualified for one of the races I felt it but just for that moment. After that it never ever felt like that because once the helmet is on I am nothing else but a race car driver.

It is not just the road and the sky but also the sea that Sneha has been in. Her father was in the merchant navy and she has sailed extensively with him. It was this that sparked her love for machines as a child.

For the girl who believes –

she has definitely been climbing up the ladder of success.

Born in Kolkata, she has been brought up in Mumbai and continues to live there. A visit to the local karting track when she was 16, made her realise that she was a natural. On one such visit when she saw two fast race drivers and got to know that they were in the national championship, her curiosity was peaked.

Sneha completed her tenth grade and decided that she wanted to train as a racer. When she could not find anyone she asked the mechanics to train her and impart whatever knowledge they had and this included she says, “Braking in while turning, cornering techniques, racing lines etc.”

Armed with this knowledge and her practice, her participation in local races started. She was doing well and got podium finishes too.

Her first break came in the form of Rayo Racing, the team that invited her to participate in the National Karting Championship. From there her career in racing took off. She even clocked the fastest lap of the day. 2009, when she secured a podium finish in her first Rotax rookie race, is a victory closest to her heart. Recalling the moment she shares,

Not only did I have technical problems with my kart, I didn’t have money to put in a lot of parts. At the beginning of the race my kart just wouldn’t start. I had given up and decided I would not race. However, a gentleman came in who was an expert and he did something to my kart and it started. I joined the race at the end of the commission lap — where all the drivers go at a slow pace and then the flag drops. I joined at the end and started last but I finished second in that race at the podium. All through the race I had to stay focused, stay strong and keep driving.

Glamorous as it may sound, racing is not an easy sport. Sneha has had more than her fair share of challenges. Since she was in grade 11th pursuing science, she could not put her studies on the backburner. The rack track became her school; she learnt about racing but also used the time to study. Her books went with her everywhere and she often studied at the track.

Another one of her challenges was to keep fit. She weighed a 90 kgs at one point of time. She lost 30 kgs. As she got older she became more aware about her health and ways to keep fit. “As I got into racing, fitness became an important part of my life because racing requires one to be very fit.”

Racing is an expensive sport, and without sponsors it gets even tougher. With no sponsor backing, Sneha has worked part time as a manager of her team, trained new drivers, done transportation, cleaned and washed the karts and even done racing alongside all of it.

continued with her racing and studying, as she had to convert her US licence into an Indian one. On an average it takes about two years to get the licence and one has to, “Work harder to get a job in India because there are many pilots who are unemployed. So you have to study a lot.”Currently she is with Indigo Airlines. She joined them at the age of 20 in 2012. This is her first job and she says, “It’s a great airline to fly with, it supports my racing and they have a lot of women friendly policy and that is quite nice.”

For Sneha life is about flying and racing. She has a very tight schedule. With all the support Sneha gets from her employer, she still has to manage with her leave time most of which goes into racing. She has to plan extensively for her races, apply for leaves and then she says, “Pray to have them approved.”

“I have no social life.” She does spend two hours into her fitness, has to wake up at different hours given her flight schedules and whatever time she has in her hands, including leaves and vacations, goes into racing.

In the face of these challenges, her biggest challenge is,

The girl on the track

Initially says Sneha, “Fellow competitors did not understand me or support me. Even my family was upset that I was pursuing racing, a dangerous sport and also working as a pilot. I was always busy and also taking risk.”

Seeing her passion, her family has made peace with her choices.

However, she does get the flak once in a while for being a girl on the track. She has received remarks like, “go back and learn to drive”, or when people have seen her drive, they’ve raised their eye- brows and even criticized. “In fact if there is a crash where two to three drivers are involved, then fingers will always be pointed towards me as I am the girl,” she says.

Currently Sneha is doing the advanced level of racing, Formula 4. While most people travel to Malaysia,

Coimbatore, and other circuits to practice, it is off the league for Sneha, given budget constraints. She directly heads to the races and has two days of practice before the race. “That is all I get,” she says.When asked if the dearth of sponsorship is because she is a woman, she is quick to retort- “I am not sure about the woman part but I hope it is not true. Even if it is I have to change it.”

At the moment J K Tyres is the only sponsor for her Formula 4.

“I really hope people, motor companies or other companies for youth icons, come forward and sponsor racing. If I have sponsors, I am at a good place right now in racing and if I have sponsors I could go much far and with my current aim in racing which is to race internationally in formula cars on a competitive level I would need sponsors and I want to represent my country when I go out.”

Ayrton Senna, who is no more, is one of the racers who have inspired her. Her current favourite is Lewis Hamilton.

Talking about the machines on the road and in the sky she says with much love, “I love the Airbus 320 that I fly, it is a very intelligent aircraft and I love my Formula 4 car. I aspire to drive the formula BMW car, that’s my favourite machine right now.”