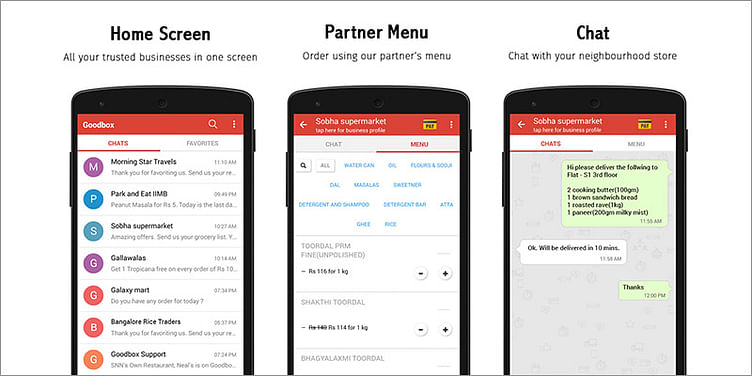 Whether it is milk for your morning tea or just a bite when hunger strikes, we've all got our go-to stores at times of need. And these most likely will be your neighbourhood stores. Imagine you run out of milk and all you've to do is send the store owner a message, pay him via the same service and you've the milk delivered? And this isn't just for that milk; it could be a personalised cake store you're looking for or groceries or daily needs. Goodbox aims to do just this. It is a mobile app that allows consumers to buy from multiple businesses over the app and allows businesses to sell to their consumers over the app.

"We noticed that there are many businesses that want to sell on the app because that's where the customers are migrating to, but there's no easy way for them to create an app of their own and they know consumers won't download multiple apps for multiple needs," says Mayank Bidawatka, who recently joined Goodbox as one of the co-founders. Mayank has been a part of the redBus core team and also Co-founded The Media Ant, he has been an angel investor.

Essentially, Goodbox gives an app presence to businesses. "We wanted to make the easiest possible platform for these SMEs that they can use to interact with their consumes and allow them to buy on the app," says Mayank.

Genesis and joining the core team

The app was conceptualised earlier this year by Abey Zachariah, who was a part of the redBus core team with Mayank, Nithin Chandra, Mohit Maheshwari Anand Kalaginamani, Mahesh Herle and Charan Raj. While Mayank was supporting the team earlier on, he joined in as co-founder only when he was convinced of the problem they were trying to solve. He was the Head of Marketing and Products at redBus and later went ahead to co-found The Media Ant.

Speaking of the shift to Goodbox, he says, "I love creating network businesses and working on innovative ideas. redBus, Media Ant and Goodbox are all unique ideas and were never done before. It's always exciting to do something that's never been done before because there's no frame of reference and that pushes you to explore your creativity in solving problems." The team is looking to hire people with an entrepreneurial bent of mind and aren't afraid to take on challenges.

Explaining how Goodbox helps businesses, Mayank says that businesses want to adopt new technologies, have a storefront and be able to interact with their consumers real-time. They will be able to host their menu on the app and create their business profile as well.

In this mobile-first and app world, every brand seems to believe that apps are the way to go. And rightly so. With the increasing penetration of mobile internet and smartphones , it looks like the best way forward. However, with several different apps flooding the market, it becomes difficult for consumers to decide the best suited ones for their needs and requirements.

Mayank says that with Goodbox consumers can find one destination to deal with their trusted businesses. These could either be neighbourhood stores you deal with regularly or a new business you discover. As a consumer, one can chat with any business of their choice, order and pay them via the app.

WhatsApp with a difference

Comparing the app to WhatsApp, Mayank says, "Both consumers and businesses are used to WhatsApp. Hence, we thought of creating something that also works like WhatsApp and allow them to directly interact with one another." While the app has a messaging feature, the team says it is different from other chat apps in that the consumer directly interacts with the business and not a chat executive. "We're more of an enabler than a doer," adds Mayank. The idea is to enable the existing players rather than controlling the interactions.

Also Read: The redBus Mafia: who are they and what are they up to?

The app was in experimental mode for awhile and started accepting payments two months ago. The team claims to have grown over 50 times in the past 60 days. Goodbox has raised seed funding from the Manipal Group, Aprameya Radhakrishna, Co-founder TaxiForSure and Charan Padmaraju, Co-founder redBus. The team intends to drive value to the SME and startup partners of the Goodbox app. Currently, it is in the process of signing up businesses in Bengaluru. "We want to deliver on our vision of having every SME business and their consumers on the Goodbox and simplifying daily transactions," says Mayank.

As per an Assocham-PwC study, about 40 million consumers made an online purchase in 2014 and the number is expected to grow to 65 million by 2015. The Indian e-commerce industry is poised to cross USD 100 billion by 2020. Now, e-commerce giants who have already spent millions online on customer acquisition are acknowledging the hyperlocal opportunity and preparing to partake in the hyperlocal gold rush.